I live-tweet Sleepy Hollow every week; follow me at @moniqueblognet!

Two previews were released from Monday’s Sleepy Hollow episode, “Heartless.” Take a look at them below, then scroll below to read my opinions. 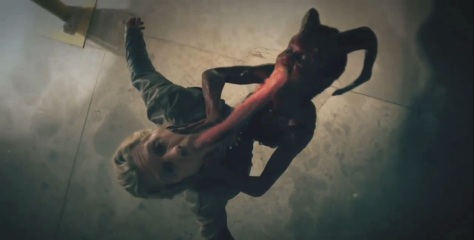 Here’s what I immediately thought after watching the previews.

Can Hawley finally prove to be a worthwhile character? I know he’s been added to provide some tension to Team Witness–this season is all about bonds being tested, after all–but so far, he’s been a less-than-likeable character. That is to say, he just seems like set dressing most of the time. He doesn’t have to be a good guy to be likeable–just look at Henry and Abraham as examples–but he has to be somewhat compelling and so far, he’s just not. Will his run-in prove to be a way to gain insight into his character? I don’t know. All I know is that Hawley’s incident will involve his underlying feelings for Abbie.

How’s Katrina going to fit into the Ichabod-Abbie dynamic, seriously? When I first saw Katrina slide into frame in the second preview, I was genuinely startled, as did Ichabod, strangely enough. I know Katrina escaped Abraham and Henry, but I expected her to be back at their house, going by the promo pictures. But here she is at Ichabod’s (formerly Corbin’s) cabin. Her input in the fight against evil had better be helpful now, because she’s now impeding on the all-important bond between Ichabod and Abbie.

I’ve said in my last recap that everyone should expect Ichabod to want to save Katrina and Henry because that’s his family, but there’s still the question of what exactly does Abbie mean to Ichabod. Up until now, Abbie’s been the main woman in Ichabod’s life, even while he was trying to save his wife. Not to mention that Abbie and Ichabod share a bond Katrina can’t get in no matter what; Abbie and Ichabod are both Witnesses.

Strangely enough, Katrina’s a third wheel in her own marriage (and this point has been brought up many times on Tumblr). Will she prove herself helpful enough to keep up with Abbie and Ichabod, who are now working on an entirely different level of communication? I don’t know, but it’s going to be tough for ol’ girl, no matter what.

The succubus looks genuinely scary.  Of course, there’s a lot Fox isn’t letting on about what the succubus can do or who she can turn into. But I’m very intrigued to see what kind of damage she can do and whose underlying desires she’ll reveal. Conventional wisdom says this will be a Hawley-centric episode, but every episode always goes back to how Ichabod and Abbie relate to each other and feel about each other. I feel there will be a bit of a revelation about either Ichabod or some character we didn’t expect.

What do you think about the previews? Write about them in the comments section below!