I could feel members of the Sleepy Hollow nation put up their hex symbols at the thought of Irving becoming evil. But, as my sister pointed out to me, there’s really nowhere else for his character to go unless he becomes as boring as Katrina. Irving’s soul is still in the balance, and now that I’m looking back on my own thoughts, it was a little silly of me to think that Irving would just go back to being normal Irving. Now that Irving’s evil, not only will we see tons more of him, but we’ll also really get to see how dramatic Orlando Jones can get. We’ve already seen snippets of it, but he’ll really be able to sink his teeth into Evil Irving.

I always knew that this episode would reveal more about Katrina to us. Of course, when I theorized this, most of the #AbbieMillsDeservesBetter clapback was still in effect, so I wonder how drastic this episode was affected by it. I’d always assumed “Spellcaster” was going to show us Katrina’s dark side, but I wonder how dark she was originally going to go during the first draft of this episode.

Anyways, Katrina proved to be a little bit of an asset this week, and I was completely shocked that I was taken in by her story about her grandmother. It would seem that 1) I already like Katrina’s grandmother Helena more than Katrina, which is awkward, since they’re both played by Katia Winter and 2)I believed Katrina when she told the story. She actually acted like she had a soul and not a Body Snatcher.

Also, kudos to the hair department’s use of Winter’s natural hair color. She seemed a lot more comfortable without that red wig. She seemed like she understood Helena’s motivation more and was able to incorporate more of herself, what with the hair, the slight Dutch accent (Winter is Swedish, and Sweden and the Netherlands have seen a lot of each other), and the clear tone of her character. 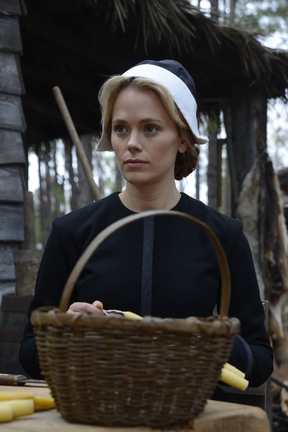 Katrina also gave us some magic this week, thanks to some flower power and some hexes she through at the absolutely disgusting Solomon Kent (Jonathan Schaech). His story was simple—he started the Salem Witch Trials simply because he misread a woman’s signals—but he provided all the gore I’ll need for the rest of the season. I’m just not a fan of people slitting wrists and pouring their blood out of their veins. Please put a warning up next time, show.

ALSO READ:  ‘The Underground Railroad’ Attempts To Upend Viewers’ Notions Of What It Meant To Be Enslaved

Ichabod also gave us his standard “Must Make Verbal Love to Abbie” moment, but after Tom Mison’s declaration of Ichabod’s total devotion to Abbie, it feels like Ichabod ratcheted up his macking moment. Instead of saying the usual “We’ll be strong together” shtick, he said that they must fight for love and each other while he looked directly at her. He also asked Abbie if she saw a future for them…in no uncertain terms.

Calm your butt down, Ichabod. Your wife isn’t even evil yet and you’re already trying to make some moves on Abbie. He’s been reading Spider-Man and learning about Edward R. Murrow; perhaps he’s also been listening to R. Kelly’s “Feelin’ Single” since he’s not only asking Abbie about their future and love, but he also casually knocked his hand next to her knee as they were conversing about Kent in the cabin. Ichabod has always been a little of a mack daddy when it came to Abbie, but now he’s laying on the mack game too strong.

So, at the end of the episode, Team Witness has vanquished Kent, but not everything is over. Kent was using the Grimoire, a book of evil magic spells, in an attempt to go back in time and change history just so he could be with the woman who only viewed him as a friend. But Irving, who we thought was on Team Witness’ side, stole the book for Henry! DUN DUN DUN!

Yes, Henry’s back, and he’s even more of a black magic wizard than before. Seeing him identify with the family that owned the hotel he was staying in was cool; John Noble knows how to act the heck out of a scene, and the scenes of just Henry sitting, watching junk TV and conversing with the woman and her son were enough. But when he killed the son’s bullies just by flicking his wrist and a finger? Perfect. I do love the heck out of Henry. He surely knows who he is.

Katrina, on the other hand, was told by Kent earlier that she doesn’t know who she is. She’s destined for evil, he says in so many words. Even her magic powers are aligned with it. She had yet to go that route, but after getting a terrifying pep talk from Kent, she decided to give it a go. Turns out she’s much more suited to dark magic than she initially thought. Although, if you ask me, she’s already used black magic; she’s somehow hexed Irving (I’m assuming) since she made him drink that stuff last episode. Let’s not forget she kept Ichabod alive for hundreds of years despite the coven and the Freemasons saying she was going against the laws of nature.

So, at the end of the day, did we get a progression for Katrina’s character? Sure. It’s movement towards a resolution most of us had either figured out or were hoping would happen since Season 1, but it’s movement nonetheless. Have other, more interesting storylines been introduced? Yes—Irving’s role as Henry’s second hand is going to be interesting, and I’m here for what Jones has to give us.  Also, Henry seems to have refocused his mind and, as if he’s an athlete, has come back stronger and better than ever. He might not have killed his parents the last time, but he’s sure going to give it his all this time!

The most important question for a lot of fans is if Ichabbie has been advanced. Mison has already said Ichabod’s “completely in love” with Abbie, so there’s that. But within the show, Ichabod’s now questioning Abbie about their future and is boldly declaring his love without specifying that he’s talking about her. He also f—ed Kent up pretty badly, all because Abbie compared him to Kent and Ichabod didn’t want her to think he was an evil flake of a man. Yeah, he told Kent not to mess with Katrina, but the moment was less about husbandly duties and more about Abbie’s opinion of him. He also called Abbie for house hunting help. I’d call all of this a win for the Ichabbie (now canon?) camp.

Okay, what did you think about the episode? Give your opinions in the comments section below!