If you had read my past Moniqueblog recaps of Pan Am (which are still available on the Internet Archive), then you might remember how much I loved Kal Parekh’s co-pilot character Sanjeev, or “The ‘Jeev,” as I called him.

The film, based on real experiences, tells the story of a Muslim informant hired by the New York Police Department’s intelligence unit to provide information (bated or otherwise) on terrorist activity. Parekh plays Det. Nick Patel, whose intent on meeting his goals could prove to be detrimental.

Read below to learn more about Parekh’s character, as well as more about the film, working with the cast, and how the film tackles the subject of Muslim stereotyping. The Spectacular Jihad of Taz Rahim comes to AMC theaters in Times Square in NY May 29.

How would you describe The Spectacular Jihad of Taz Rahim?

I have not seen the film yet, but from the script and the film making process, its definitely an entertainer. One of the reasons I did the film was because it had a exciting script! It deals with serious issues but it definitely has its comedic moments arising from the situations the characters are presented with. I think “dark comedy” are the right words for it.

What can you tell me about your character, Nick Patel?

Nick is a very focused individual, putting his work before family , friends and his wife. He’s driven and sometimes that goal oriented mind set leads him to make decisions that would compromise his morals.

The film is loosely based on the actual stories of Muslim informants; how much of this information affected how you portrayed your character?

I was given some background on the real events the story is loosely based on and I did my own “investigating” as well. I was sensitive about what I was doing in the beginning, but then I focused on the character of Nick, what his likes and dislikes are, what makes him tick, his relationship with the other characters, why he is who he is. Because yes the story is important but as actors we must serve the character and their motivations, if we do a good job, the story will take care of itself. 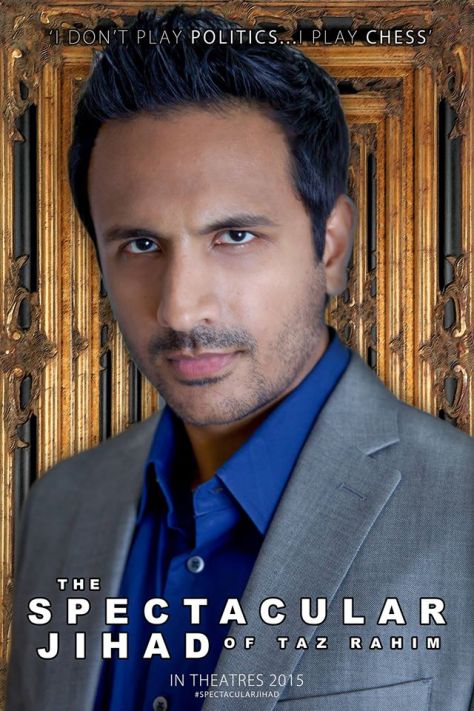 How was it working with this talented cast , the director and filming in New York.

I can tell you we got lucky with the cast that was put together. All the actors I worked with brought their A game, but we definitely had a lot of fun making the film. The crew was fantastic and I loved that we had a couple of weeks for rehearsals, Director Raghav Murali was keen on getting us together and working out the scenes. Everyone on the production was very collaborative and open to suggestions.  They wanted the best ideas to end up screen. As far as filming in NY, I’ve filmed in NY on different TV shows and I love it. But this time , it being a smaller production we were able to get a lot more done in a days worth of shooting.  One of my favorite days was filming the chase scene in Jackson Heights as the on lookers were baffled as to why these two guys we’re running after each other over and over in the same direction, haha!They caught on soon that it was a film and everyone was excited and supportive.

I don’t see how an intelligent group of people can be referred to as monolithic by anyone. To paint a broad stroke over a group of people and categorize them as only one type because of the actions of a few groups of individuals is laughable. I find that idea absolutely ridiculous. Above everything we are human beings and as people we have different ideas about how things are and the way they should be. We are not machines , we are intelligent beings and we are all going to think differently, from the biggest to the smallest of ideas. As far as the film goes, we didn’t set out to change anything, but to get a conversation going and maybe have a more thoughtful, peaceful approach when one is confronted with these issues in the future.

What can audiences expect from The Spectacular Jihad of Taz Rahim?

I hope they find it entertaining and thought provoking, not only in the subject matter, but also in how the South Asian community is coming together and offering a different fare from the usual. We don’t usually see these type of actors playing these roles in the mainstream cinema.

So please, go watch the film and support the independent film community. I really do hope you enjoy it and take away something from it.