It’s an exciting time in the Disney Princess world! The voice for their latest princess movie Moana, has been found in 14-year-old newcomer Auli’i Cravalho!Cravalho, from the Oahu, HI town of Mililani, said that she submitted her audition tape without considering herself to be good enough to actually get cast. “I was getting through my freshman year, and there were already so many great submissions over YouTube,” she said to People Magazine (which also has exclusive character sketches of Moana). An Oahu casting agent noticed her audition and sent her to California after watching a video of her singing at a charity competition, and the rest is history. 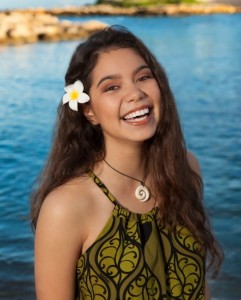 Cravalho is honored to play Moana, especially for what she represents. “From baby time to now, I wanted to be a Disney princess, then I wanted to be a singer or an actress,” she said. “Moana is such an amazing character. She’s brave, she’s so empowered, she knows what she wants and she’s not afraid to get it, and I think that’s something I can relate to as well. I just love watching how she goes along in this wonderful movie and grows as a person and helps her culture along the way.”

Cravalho will be sharing screentime with Dwayne “The Rock” Johnson, who is playing demigod Maui. Together, Moana and Maui will go an adventure to, according to the film’s synopsis,”prove herself a master wayfinder and fulfill her ancestors’ unfinished quest.” 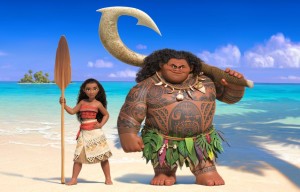 What’s also great is that Lin-Manuel Miranda, known for the constantly raved about Broadway production Hamilton, is providing the music. How good can this movie get? (Let’s hope it lives up to its wonderful parts).

At any rate, Disney is striving to go above and beyond with their attention to detail when it comes to diversifying their films. I can’t wait to see all of the Moana merchandise flood the stores; I might also indulge my inner child and buy some myself.

Take a look at the video showing Cravalho getting the big news!

.@auliicravalho finds her way as the voice of Disney’s #Moana. https://t.co/bCaNckXAYF

What do you think about the new Moana news? Give your opinions in the comments section below!