One thing I’d been thinking about this fall TV season is that along with there being tons of women of color paired with white men characters, there have also been a ton of white characters who are “special” in some way. Characters like Sleepy Hollow‘s Ichabod Crane, Supergirl (who is white-adjacent since she passes), The Player’s Alex Kane, Limitless’ Brian Finch, Minority Report‘s Dash and Blindspot‘s Jane Doe all have something that makes them stand out from the crowd. I have two theories as to why we’ve seen the rise of the Special, yet Marginalized White Lead, and why we might see more of this type of character for a while.

A way to stay afloat amid the Diversity Wave: Right now, it’s clear that we’re in a moment in TV history in which America is finally being recognized as the diverse place it is. Never has my TV watching been so frenetic, trying to watch everything and record my reactions on Twitter and on this site.

One of the big reasons diverse shows are so popular is because audiences are finally seeing people who look like them AND these characters are also well-developed. The days of having white characters as the “norm” are over. Don’t get me wrong; there have been plenty of white characters over years that have been well-developed and worthy of cultural dissection, like Don Draper, for instance. But it was also implied that white characters were considered primetime viewing simply because they were white. Remember back in the ’90s, when, even though there were quite a few shows with minority casts, there were more than double the amount of shows with just straight white casts? Remember how exciting it was when Aisha Tyler became the one black girl on Friends, or when that black girl became the one black girl on Boy Meets World? The idea was that “black” or “minority” shows were still niche shows, shows that didn’t appeal to mainstream America, even though mainstream America was made up of all races, including black people. When someone of color did make it onto a mainstream (i.e. white) show, it was a big deal.

That “white=mainstream” logic exists in the movie-making industry; the studios still think that minority actors won’t sell overseas, but white actors, in their worldview, always will. Nowadays, white isn’t the only definition for “mainstream.” We’ve got Fresh Off the Boat, Empire, Quantico, Sleepy Hollow, the TGIT block on ABC, and plenty more shows that prove that the “white=mainstream” model is dead. White characters on TV can’t rely on their racial background as a tacit reason for us to watch them. Now that the racial playing field is evening out, there seems to be a bigger focus on making the white characters that do exist even more eye-catching.

I think this is the reason we’ve seen so many white characters (who are also generally surrounded by people of color) who are deemed as different from the norm. These characters have come to represent the white audience who do consider themselves as well-rounded, open-minded people who don’t rely on their whiteness to get by. Ichabod comes from the past and is chosen by God to be one half of the Witnesses. Alex Kane is a reformed killer who is now the pawn in the world’s biggest underground betting house. Supergirl is, well, Supergirl. Jane Doe is a mystery woman who has what could be considered superhero powers, and Brian Finch becomes like a superhero when he takes a special pill and can use both sides of his mind. These characters are a reaction to the realization that whiteness doesn’t make a character  any more special than a non-white character.

“White Fragility” in character form: Of course, there’s another way to look at the phenomenon, and it’s a very cynical view. You know about the concept of “White Fragility,” right? White fragility, a concept coined by Robin DiAngelo, a multicultural education professor at Westfield State University and author of What Does It Mean to Be White? Developing White Racial Literacy, states that white Americans in general don’t have the vocabulary to speak about racial bias within the country’s framework because of their own experiences of privilege. So, whenever someone brings up the topic of racial bias or prejudice, a white person may not want to discuss it for fear of delving into their own contribution towards society’s racial framework or because they have never had to experience racial bias in their own lives. To quote her in an AlterNet article:

For white people, their identities rest on the idea of racism as about good or bad pepole, about moral or immoral singular acts, and if we’re good, moral people we can’t be racist–we don’t engage in those acts. This is one of the most effective adaptations of racism over time–that we can think of racism as only something that individuals either are or are not “doing.”

In large part, white fragility–the defensiveness, the fear of conflict–is rooted in this good/bad binary. If you call someone out, they think to themselves, “What you just said was that I am a bad person, and that is intolerable to me.” It’s a deep challenge to the core of our identity as good, moral people.

The good/bad binary is what also leads to the unhelpful phenomenon of unfriending on Facebook.

To me, it seems that while there is an element of “We’re going to be more than just white people” in today’s characters, there’s also a bit of “Wait a minute! I’m not a bad white person! I can exist with minority characters because I get the struggle, too! I’m special!” The fragility comes in when we get white characters who do have racial privilege, but still insist (without ever saying it explicitly) that they understand the life of a minority because of their “specialness.” They become outcasts because of how privileged they are or have become due to some gained knowledge, access, or power. For instance, Ichabod’s still a white man, a man that should believe he has even more privilege than today’s white man, because he comes from a time when there were slaves all around him. But not only is he a liberal by his time and today’s political standards (what with his abolitionist work and having a humanistic understanding of homosexuality), he’s also a person who can remember everything that’s happened in his life, is a Witness, has risen from a death-like slumber, and was married to a witch. He’s a big outcast, but because he’s got a unique set of privileges (living in a time when all your family is dead is something tragic, to be sure, but you get what I’m saying).

Or take Brian Finch. He’s just a man, but with that special pill, he becomes a mastermind, the only one in the world who can see what he sees and do what he does. Or, take Dash from Minority Report. There are two others like him in the world, but even still, he’s a minority for his special gift/curse to be able to see into the future.

In short, these characters are a way to deal with a racial discussion of privilege (in this case, who gets shown on television) by trying to side with the minority and, in effect, become a new minority, the minority of special white characters  persecuted for their specialness.

Why you’ll see a lot more of these characters: Because TV is only just now concerning itself with America’s diversity, TV (and America itself) is still at a rudimentary point when it comes to discussing race, privilege and bias. In an effort to show that they are down with the cause, people will continue to make white characters who “get it.” It’s a way for creators/studios to show that they hear what people are talking about in terms of racism, and creating characters like these is a way for TPTB to wean themselves away from white privilege. Eventually, though, when the world starts looking even more like this: 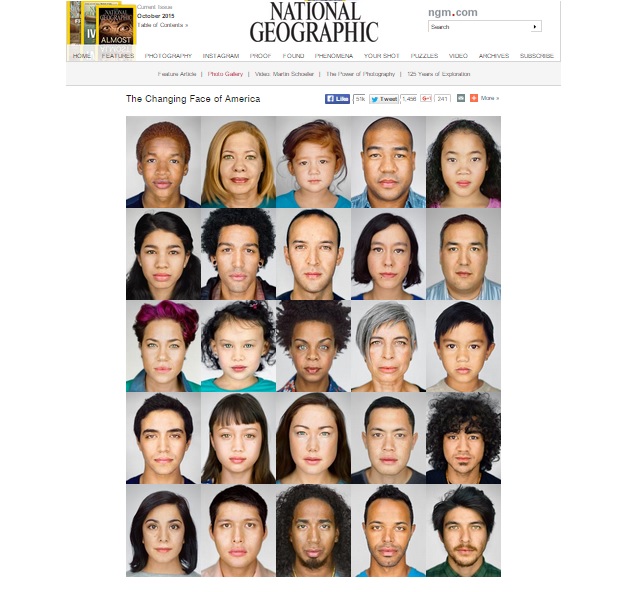