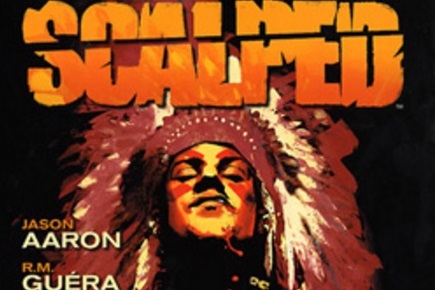 Have you heard of the DC/Vertigo comic book Scalped? If you’ve been a fan of the comic book, it’s now been greenlit as an upcoming show on WGN America!

The Hollywood Reporter has described Scalped as such:

“‘Scalped’ is described as a modern-day crime story set in the world of a Native American Indian reservation. It explores power, loyalty, and spirituality in a community led by the ambitious chief Lincoln Red Crow as he reckons with Dashiel Bad Horse, who has returned home after years away from the reservation.”

This show is very big news in the world of television as well as the world of media in general. Scalped could very well be the hottest show of the upcoming season, and it’s ability to be a game-changer can be broken down into three reasons:

Scalped will boast an all-Indian cast

The Hollywood Reporter states that WGN America is aiming at doing something Hollywood hasn’t willingly done at any point in its history. As the site reports, “Insiders say WGN America is eyeing an all Native-American cast.” When was the last time you saw Hollywood do something like that?

This is groundbreaking for two different reasons. First, it increases TV’s lead in the diversity race; film still has tons of mileage to go if it wants to catch up. Second, America hasn’t had an all-Native led show ever. The most we’ve seen Native Americans on television is in some kind of historical setting, as if they’re all dead. Or, if we do see them in a modern sense (such as in Sleepy Hollow) we only get to see them for five minutes in one episode (I’m still hoping for Eddie Spears’ Big Ash to make a return). A show like Scalped could really open some doors for Native actors trying to make it in Hollywood.

With its pulpy tone, Scalped could be the Empire of its kind, which means huge fame, but also huge consequences

This is both a good and bad thing. It’s good in that Scalped could become must-see, live-tweetable television in the same vein that Empire has dominated social media and pop culture as a whole. Or, as it’s been compared to, it could be the Sopranos of the Twitter age, or even the Breaking Bad of the Twitter age, a show that ensares its audience with gripping drama.

The bad thing about Scalped possibly becoming an Empire specifically is that with that fame comes compromise. Everyone (including myself) loves Empire. But as fun as Empire is, the show is not without its problems, such as colorism. (Before her character was bumped up, Gabourey Sidibe’s secretary character Becky was an afterthought, Ta’Rhonda Jones’s character Porsha is the comic relief to light-skinned Cookie, Bunkie was killed in the first episode, Lucious’s maid is a heavy-set, older black woman, and Malik Yoba’s character Vernon, who had an interesting subplot as a recovering drug addict, was killed later on in the first season by Rhonda.) Other issues include the treatment of women in the show, particularly the character Cookie, who, while a fun character (and a character I love), is filled with the “angry black woman” stereotype. Taraji P. Henson herself talked about how ironic it was that she would win a Golden Globe for playing an ex-convict rather than any of the other characters she’s played.

The Scalped comic book has been praised as a gritty modern noir, but the book has also faced its fair share of criticism, such as glossing over of the diversity of Native issues and Lakota culture as a whole. Wikipedia describes the comic as such:

“The series focuses on the Oglala Lakota inhabitants of the fictional Prairie Rose Indian Reservation in modern-day South Dakota as they grapple with organized crime, rampant poverty, drug addiction and alcoholism, local politics and the preservation of their cultural identity.”

While much of this could be handled with a deft and knowledgeable hand (such as by a Native writer or a writer who has done a lot of outside research and has fielded the help of consultants), it’s unclear how much knowledge comic book writer Jason Aaron has about the Lakota or Native Americans in general. Aaron, a non-Native white writer, could be critiqued as having fallen into the same pitfalls many other writers have fallen into when writing modern Native characters. As Indian Country Today Media Network writes:

“The question of whether Scalped was exploitative and harmful was raised from the get-go. …Scalped creators, writer Jason Aaron and artis R.M. Guera, aren’t Natives, and whether the world they depicted ultimately treated Native people fairly in the course of their series is a topic for debate.”

Rob Schmidt of Blue Corn Comics has written his critique of the story, which, in fact, does state, in so many words, that Aaron did rely on stereotypes of reservations:

“It’s clear what Aaron’s inspiration is for this ultra-negative portrayal of life on the rez: the horrible situation at Pine Ridge in the ’70s, when rabble-rousin activists fought a corrupt tribal government. This is the conflict that ended in Wounded Knee and put [activist] Leonard Peltier in prison for life.

Trouble is, that was 30 years ago. Tribal governments are much cleaner now because anyone with a cellphone, copy machine, or website can expose their flaws. Indians do use technology, believe it or not, although you wouldn’t know it from SCALPED. This series reads as if it was set in the 1970s–as if Aaron wanted to do a Quentin Tarantino version of Thunderheart.

…Moreover, casinos aren’t a major source of crime. Every Indian casino gets approved and regulated by multiple levels of government. The most recent gaming scandals involved lobbying in Washington, not crime on the rez.”

Schmidt goes onto say that one of the book series’ tropes is that it portrays is that “[t]he many bad Indians outweigh the few good Indians [,] [t]hus the Indians have gotten what they deserve.”

An argument could even be made about the name of the book itself indulging in stereotype, as well as the most popular cover art of the first volume by British artist/writer Jock (shown above). We’ve already had tons of issues with folks appropriating headdresses, and drawing one in an attempt to grab potential readers’ attention is no different.

Scalped could delve much deeper into Lakota history, culture, and the issues facing the Lakota and all Native Americans in a much more honest light than the comic.

The question I have for Scalped revolves around the basis for the book itself. As already stated, the book is, as The Hollywood Reporter states, “partially inspired by the 1975 arrest of Native American activist Leonard Peltier.” The Hollywood Reporter states that Peltier was arrested for killing two FBI agents in a shootout on a reservation, but his supposed guilt has long since been put into question, and many have made petitions to get Peltier’s sentence reexamined, lessened, or removed all together.

This point in history could be a great basis for a show, if taken into account as a watershed moment in Native and American history. Will the show decide to delve deeper into Native American issues and cultural differences and similarities? Will the show actually portray a more realistic portrayal of the Lakota than shown in the comics? Or will the show continue the book’s issue of failing to avoid stereotypes? The fate of Scalped is in the hands of Doug Jung, another non-Native. Will Jung and the show’s team bring on Lakota consultants in an effort to make the show fun and exciting while being respectful of the culture? We’ll see, and for that alone, Scalped is must-watch TV, at least for the first episode.