The first in a series of articles for: 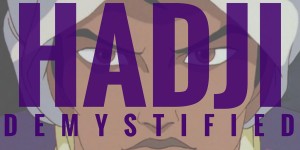 Between 2009 and 2010, I wrote extensively about Hadji Singh from The Real Adventures of Jonny Quest in a series of posts called “Hadji Demystified.” Why “demystified”? Because the kid Hadji from the ’60s might have been spectacularly acted, but the character itself was filled with tropes such as Hadji somehow knowing magic, thereby making him mystical. The mystical aspect of Hadji bleeds into popular tropes Hollywood has about Indian characters, and non-white people in general; that we’re somehow full of wisdom, magical (either literally or in terms of the value the characters bring to white characters), and are exotic specimens, not actual human beings.

When I fan out about characters, I take it seriously, and usually that means learning everything about them and their backgrounds. I did such with both the kid version of Hadji and the teenage version from Real Adventures. The teenage version affected me even more because while kid Hadji was the only person I could identify with (he was the only non-white face, the only person who ever shot down Jonny’s notions of following the danger, etc.), teenage Hadji–and the treatment his character received from the character development team–gave me a different perspective entirely.

Through my love for Hadji, I’d put it upon myself to learn more about Indian cultures and what was right and wrong about Indian representations in America. As I found out, there was a lot that could be questioned about Season Two Hadji (the change in voice actors, the heavy reliance on stereotypes and tropes, the fact that Hadji became a maharajah even though maharajahs had stopped being in power in Bangalore long before, etc.), but Season One Hadji was a character that was meant to positively represent not just Hadji as a fleshed-out character (for instance, the introduction of his last name and his devotion to Sikhism), but an aspect of the immigrant experience.

To use two quotes I used ad nauseum while writing my Hadji posts:

I did have a great Pakistani friend at university, Tahir Attar. Educated in Europe at expensive private schools but retaining deep cultural roots. I believe, for example, that he entered an arranged marriage – quite happily. He was a perfect mix of East and West and I took a lot from him for Hadji. We did, of course, add an additonal dose of mysticism (for want of a better word), for dramatic reasons and in an attempt to keep the stories really open. (Minds, too, perhaps – but God forbid that we were proselytizing.) Yeah. Compare our Hadji with that moron in … oh, god, what was that silly robot movie? it will come to me. Or most of the silly sing-song morons which Hollywood makes of Asian Indians.
Clearly you have some knowledge of my own background – brought up in Zambia. (Tongue in cheek, Buzz, Stephanie and others said that I had a lot in common with Jonny – and, actually, I really did identify with our vision of him.) Not just in Zambia but deep in the bush. I grew up with Africans. I was an African, albeit white. When I went to Europe and, later, the US, I was stunned at the casual racism, the unthinking stereotyping, the sheer ignorance of other cultures. So, when it came to Hadji I was determined to make him real. Or as real as he could be in the context. Michael Benyaer really ‘got’ what we wanted to do with this character and that made it easier to ‘hear’ Hadji’s voice while writing. I wonder where Mike is now?
In fact, however pretentious it makes me seem, I wanted this authenticity in all the characters. That’s why we went for some rather ‘out there’ casting – and that’s why, of course, the succeeding producers undid everything and went safe. It’s pretty sad, and quite indicative of the xenophobia of our culture and the play-safe of the industry.

–JQ:TRA’s Peter Lawrence on re-developing Hadji’s character for the series

“[he] is one of the few roles for an ethnic actor that is not a bad guy. I mean, how many East Indian heroes have been on television? Hadji is for the sensitive kids out there. He is the outsider in all of us.”

The latter quote by Benyaer made it imperative for me to get his point of view on playing Hadji during the first season of Real Adventures of Jonny Quest and how it felt playing a character that had been thoughtfully approached by the development team. All it took was one simple email and some great timing for me to get my interview (I still remember that Benyaer said it was serendipitous that I’d email him right around the time he’d actually read some of my Hadji-centric writing.)

Thus ensued the following interview. We talked about acting, of course, but we also discussed the state of diversity in 2010. At that point, the type of movement on diversity we’re seeing now was just a pipe dream. But while there’s been a lot of movement, there’s still more that can be done; Aziz Ansari’s Master of None and Mindy Kaling’s The Mindy Project can’t be the only two holding it down for our American Desi friends. In any event, check out the interview.

I’ve been writing about Hadji for a while, just giving my viewpoints on how Hadji is important to the entire conversation of race and culture on television, learning about different religions, etc. But now you don’t have to take just my word for it. Take it from Hadji’s own voice.

Michael Benyaer, film and TV actor, got his start in acting straight out of high school, appearing in an episode of 21 Jump Street that was filmed in his native Vancouver, B.C. Soon after, he landed his first voice acting role as Ken in Barbie and the Rockers, which garnered him quite a bit of press. “I guess people thought it was pretty funny that Canadians were voicing Barbie and Ken,” he said. He later landed roles on G.I. Joe and Reboot.

When he was cast as Bob on Reboot, Benyaer was able to add his own experiences to the character. “As the role progressed, they wrote more to what I was doing. I was able to help create the character. It was exciting to be able to help create a character.” Part of how he identified with Bob was through his favorite cartoon character, Spider-Man. “It was nice to be able to play a hero who was fallible; he was like Spider-Man/Peter Parker, someone who was thrust into his job and learning to cope with it.”

When he moved to California, The Real Adventures of Jonny Quest was the job that opened him up to Hollywood. Through landing the role of Hadji for season one of Real Adventures, he was able to relive part of his childhood while befriending and learning from veteran actors. “It was very ironic to think that I watched Hanna-Barbera cartoons as a kid and that later I’d be working where they made those cartoons,” he said. “I got to meet Frank Welker [long-time voice actor who was voicing Jonny’s dog Bandit], George Segal [long-time movie and TV actor, voice of Dr. Quest] and Robert Patrick [movie actor best known for Terminator 2, voice of Race Bannon]; I’d have lunch with them every week, and just pick their brains.”

However, through the casting for Real Adventures, as well as casting for live-action jobs, Benyaer said something that mirrors what a lot of ethnic actors have to contend with. “Hollywood is…Hollywood is very specific,” he said. “Hollywood casts roles based on what you look like.”

During his tryouts for Hadji, he was aware of Indian stereotypes that were still in play. “There were actors who were using this accent like Apu [from The Simpsons], and I was like, ‘No, that’s offensive!’” Also, said Benyaer, many people in Hollywood do not differentiate between accents that originate from India and the Middle East. “To them it’s all the same,” he said, “and I’m like, ‘No, that’s a Pakistani accent,’ [or] ‘No, that’s an Israeli accent.’”

It was revolutionary, said Benyaer, that Hadji was created for the ‘60s version of Jonny Quest. “He was an early character of color that was not black or Hispanic on TV,” he said. To further push a positive portrayal of brown-skinned character on TV, Benyaer set out to bring a touch of class. “I based [Hadji’s accent] on Gandhi—someone who’s worldly with traces of a British education. I wanted to give [the role] respect. I wanted to give it some sort of class. And Peter Lawrence, the producer, responded to that. I was also allowed to add some understated humor to the character.”

Benyaer said that Hadji is very important in the conversation about race and culture being represented in entertainment. “He is the touchstone of Indian chracters,” Benyaer said. “During the ‘90s, there was no one [of Indian ancestry] on television. There was Apu, but that’s it. In 2010, there’s [Mohinder from Heroes, played by Sendhil Ramamurthy], The Cape, [Adhir Kaylan from Aliens in America and Rules of Engagement], and Harold and Kumar. Slumdog Millionaire was the movie that made everyone think of making Indian characters, and Hadji was the precursor of this.”

It is important that everyone gets represented in entertainment. “I have Asian American or Asian Canadian friends, and I ask them [about what cartoon characters they liked], and they always remember the people that looked like them in the cartoons,” he said. “Indians in Britain are more like how African Americans are here in America; Indians have a lot of representation on television. In Canada, Indians have supporting roles. It’s just in America where that’s not the case.”

As far as how ethnicities should be represented today, Benyaer is hopeful that the representations of ethnicities spans beyond more than just the character’s color or accent. “I think what we should see now are people of color that don’t have the accent of their ethnicity, like a character like Hadji with an American accent.” But, he is also glad that the number of ethnic characters on television have increased. “The quote that I said back in 1996 [about Hadji being one of few minority characters that wasn’t the bad guy]—fourteen years later, I’m glad it’s not true.”♦