I’ve talked a lot about Tyrant on this site, as well as on my slice of the Entertainment Weekly Community. One of the biggest points of contention I’ve had is that the main character, Bassam/Barry, is played by a white British actor, Adam Rayner. Tyrant is a show completely about the Middle East and Middle Eastern characters. Seeing how actors of Middle Eastern descent have to face tons of stereotyping and marginalization in Hollywood to get meaningful roles (roles that aren’t terrorists), and how young Bassam is actually played by young actors of Middle Eastern descent despite Rayner playing adult Bassam, I’ve not only called the show out on its casting of the main character, but have personally wondered how Rayner felt about it. Well, he’s spoken about this and more in his interview with Cigar Aficionado.

“My main research was reading about the region…I’m not playing someone who was fully culturally an Arab man—to him, this world has become alien,” he told the magazine. “Still, I was learning about Bedouin and Arab culture, the history and politics, as well as the current political climate, trying to gain an understanding and knowledge that Bassam would have grown up with.”

Howard Gordon, the executive producer of Tyrant (along with other Middle Eastern-based—and contentious—shows 24 and Homeland), said of Rayner, “Obviously it’s a challenge for someone with no experience of the Middle East to play someone from there. Adam has been up to it.”

Let me analyze these points for just a second. These are my thoughts, not the thoughts of Cigar Aficionado. First, let me say the comments in the article are very enlightening. But I do have some stuff to say after watching two seasons of Tyrant.

However, I’ll give Rayner credit for finding his way into Bassam’s point of view. To me, Rayner’s Bassam hints at something unsavory that seems to be true to the character; Bassam has a large level of self-hate. Not just for his own actions, but for his culture. Sure, he comes from a line of despots. But he can’t separate the actions of his family from the overall culture of his home and the citizens that make up his home. He strikes me just as what he looks like; a Middle Eastern man who passes for white so he can get the benefits of living in America, and who lives in America so long that he removes himself from his home, his former identity, and his former actions. But, with Rayner’s Bassam taking this tone, there are new questions. Is this the tone the creator(s) wanted for Bassam in the first place? Does this tone make him less sympathetic? Would critics like me even see this side of Bassam if he was cast using an actual Middle Eastern actor (because Middle Eastern people come in all shades)? I don’t know. Such is the case with a complicated scenario of Rayner as Bassam.

The only thing I can say is that at least the production and Rayner himself seem to be aware of the issues involved. But, if the production was aware of this to begin with, why go with a non-Middle Eastern actor? An actor, I must also point out, who is someone no one in the U.S. had heard of before?

I bring this up because production teams always like say that they’re looking for “star power.” That argument has been made over and over for choosing white actors over Asian actors, and it was just used again when discussing who could play Rumi. The erroneous thought process is that they want someone with star wattage attached to their name, so they pick a white actor. However, Rayner was not a star here in the U.S.; British folks would have to fill me in on if he was a star in in the U.K. The same can be said for someone like Tom Mison, who I’m sure would be the first to say (and has said in so many words) that he’s not the sole star of Sleepy Hollow despite him having the caché of being a white Briton; Nicole Beharie, who has acted in high caliber films such as 42 and Shame, and has more star wattage because of it, is the star, and therefore the leader (or should have been if there didn’t seem to be a conspiracy to make Sleepy Hollow another iteration of Dr. Who).

The point is this: if a white actor who is looking for his big break can be given his chance by playing a Middle Eastern character, why couldn’t a Middle Eastern actor (or actor of Middle Eastern descent) who is looking for his big break be afforded the same, especially in a role reflective of his ethnicity? Again, there are a lot of questions that could have been nullified if the complications from casting were taking care of from the beginning. Again, such is the case with a complicated scenario of Rayner as Bassam.

Make no mistake; I’m not faulting Rayner or saying he’s a bad actor. In fact, most of the actors who get cast as roles outside of their ethnicity/race aren’t bad actors. It’s just there’s a can of worms Hollywood always has to open when it comes to who gets cast as whom.

All right, now that that’s out of the way, check out some of the other tidbits from the article (which is, in all fairness, a really good article):

Eric Schrier, FX Networks president of original programming, on filming in a war zone: “We try to take big swings. A show set in the Middle East? That’s a big swing…Let’s say this show had its challenges, production-wise, that first season. I mean, they were shooting rockets.”

Gwyneth Horder-Payton, co-executive producer, on the challenges of shooting scenes set in a mosque: “We built the set and hired extras of Arab descent. When Barry [Rayner’s character] walked into the middle of the service, they were upset because they said this would never happen in a mosque—it would never be allowed. Plus, here I am, a woman, in the mosque. Also not allowed. And I’m wearing shoes, because I’m going back and forth outside…Also not allowed. And they were serious, even though it was a set we’d built and not a real mosque.”

On the similarities between Rayner’s character and Syria dictator Bashar al-Assad: “The parallels to Assad are obvious. The old-style dictator father, the son who’s been trained in the West.  Still, it’s important to say that this isn’t a show about one country. That would prevent us from dealing with issues that are more common region-wide.”

On the dethroning of dictators like Saddam Hussein and Muammar Qaddafi: “How do you rule over a democracy when you’ve got a gun to your head? One easy way to solve the problem is to get a gun to the other guy’s head.  It solves the problem—but it’s not democracy…How do you create security for the country without compromising those democratic principles? Democracy requires a lot of preparation, with elections after you’ve educated the people. But how long will that take? And who’s in charge in the meantime?  It’s not as simple as, well, we got rid of Hussein or Qaddafi and now we’ll have democracy.”

On being compared to Abraham Lincoln: “When you’re playing a president or a dictator, it’s a time-honored cliché that a beard bestows authority on a man- or that’s my hope, anyway. People on the show have started calling me Abe Lincoln, which is an interesting comparison.  I’m not quite sure if it’s a compliment or not.”

On the significance of cigars in Tyrant: “They’re considered quite a Western symbol, associated with the power and wealth, smoked by the Tony Sopranos of the world.”

Read the entirety of the Tyrant interview with Cigar Aficionado (including quotes from Moran Atias, who plays Leila Al-Fayeed) in this month’s issue, on sale now (the full cover is below). Tyrant, in its third season, comes back at 10/9c July 6 on FX. 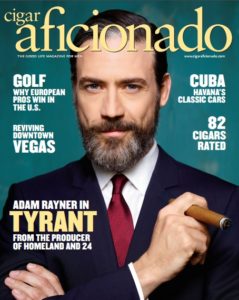