15 #DarkSkinnedHeroines Who Will Reaffirm Your Worth

At the time Leslie Jones’ Twitter harassment happened, I didn’t know how to write about it. Not because I wasn’t upset by it—I most definitely was. But I was saddened by it to the point where I didn’t want to write about it. But sometimes, not talking about something does just as much damage as intentionally doing the wrong thing. What happened to Leslie Jones didn’t just affect Jones, but it affects every black woman, especially those of a darker hue.

First, let me give a quick rundown of what happened to Jones a few weeks ago. It all started with Breitbart’s Milo Yiannopoulos. He took it upon himself to write a “review” of Ghostbusters with the title “Teenage Boys with Tits.” We’re already on a roll here.

This launched a huge spew of vile, racist, colorism-laden tweets directed directly at Jones. I won’t put them in this article, but you can read their tweets (if you want to) at Fusion.

After facing as much as she could take, Jones left Twitter.

Thankfully (or rather, after much criticism), Twitter finally banned Yiannopoulos, who has been a troll on Twitter for a long time. Twitter denizens rejoiced, but there were still some issues to suss out.

1. None of Jones’ other co-stars came to her defense publicly. I make exclusive note of the word publicly because for all we know, her co-stars could have come to her aid over coffee, or could have called her, or could have visited her at home or something. We don’t know what type of relationship she has with Kristin Wiig, Melissa McCarthy, Kate McKinnon, and Chris Hemsworth. However, no one saw or wrote about any of them saying something in defense of Jones; Jones was seemingly left to fend for herself against hoardes of trolls.

Because of the optics of the situation, regardless if they did comfort her in private, it looked like once again white feminism reared its ugly head. (To understand what white feminism is, read some of these posts.) Instead of showing solidarity with Jones as Ghostbusters sister-in-arms, there were no public tweets of support or public outcry from Jones’ other female co-stars. And let’s all remember that Hemsworth barely escaped controversy with his wife’s Native American themed Halloween party, so maybe it was best he didn’t speak at all. But still, it wouldn’t have hurt if he said something in support of Jones.

The lack of help smells of “Strong Black Woman” Syndrome, in which white individuals don’t recognize the vulnerability and emotional life of their black counterparts (to read more about the plight of the Strong Black Woman, read this post and this one). While white women are routinely shielded and protected over the slightest of infractions, black women are constantly left to fend for themselves. We are constantly faced with the “But you’re so strong!” mindset. This codes into “But you have no feelings!”

ALSO READ:  'This Is Us' Fans Want More Of Hai And Laurel's 'Amazing Love Story'

2. The type of abuse Jones faced had a specific strain of colorism to it. Excuse me for repeating some of the phrases tweeted out, but the epithets of “big lipped coon,” Yiannopoulos gleefully writing, “rejected by another black dude,” and the constant comparisons to gorillas all reek of colorism directed at darker-skinned women.

The obsession some people have with skin color runs deep in the culture of this nation. The lighter you are, it’s thought, the closer you are to whiteness and acceptability. Whiteness also has erroneous connotations of femininity, gentility, vulnerability and worth. The colonialism of the mind not only affects white Americans, but Americans of all stripes. Within the black community, colorism has a huge history, from the Blue Vein Society of the past, to people claiming other ethnicities (whether it’s true or not) to remove themselves further from their blackness.

Dark skin is not just at the bottom of the colorism ladder; because it’s at the bottom, it’s wrongly associated with lack of femininity, brute strength, and once again, lack of emotion and vulnerability. A dark-skinned woman has had to grow up with verbal and nonverbal abuses about their skintone, which can take a toll on self-esteem; just take a look at the “Paper Bag Test” phenomenon, which tests how light-skinned (and supposedly how acceptable) a person is, as well as the famous doll test performed by psychologists Kenneth and Mamie Clark. If you don’t know about the test, the Clarks gave black children white and black baby dolls, then asked the kids which doll they liked the most. The kids ended up liking the white dolls more, while the felt the black dolls—the dolls that looked like them—were worthless. When I was growing up, there were, thankfully, black dolls, and there had been black dolls since the mid-to-late 1960s (particularly after the Civil Rights Movement). But dark-skinned dolls, dolls that look like this: 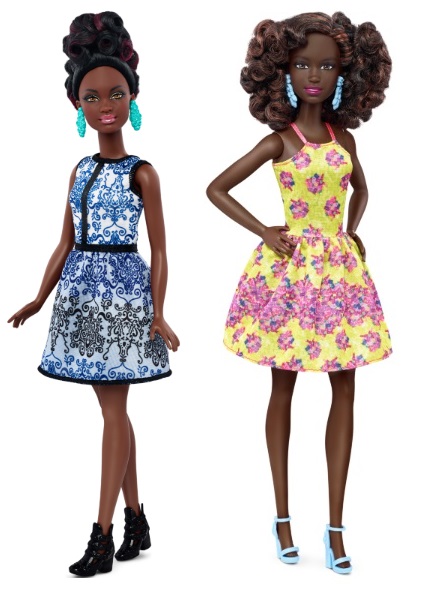 haven’t been around all that long. In fact, these dolls just came out April and June of this year. (I’ve personally seen one other dark-skinned contemporary Barbie doll a few years ago, and this is without counting the South African “World Culture” Barbie doll, which seems to be discontinued on the website.) Darker-skinned girls and women have still had to wait for proper representation in dolls, not to mention in actresses on television and in film.

3. Jones’ non-European features were also the subject of ridicule, and this is based in a European-centric ideology. Black women with more European features, such as thinner noses, lighter skin (again, colorism), and and smaller lips, are often given higher booking over actresses with more pan-African features such as flatter noses, darker skin, and fuller lips. This reflects society at large, which gives precedence to those who have more European features and appearances. This is why Stacey Dash has completely changed herself from this:

and why Lil’ Kim became unrecognizable.

This is also why Viola Davis has been public about combatting colorism and racism in Hollywood. In her interview with The Wrap, she said:

“…[W]hen you do see a woman of color onscreen, the paper-bad test is still very much alive and kicking. That’s the whole racial aspect of colorism: If you are darker than a paper bag, then you are not sexy, you are not a woman, you shouldn’t be in the realm of anything that men should desire. And in the history of television and even in film, I’ve never seen a character like Annalise Keating played by someone who looks like me.”

Society and Hollywood should be ashamed, because Milo Yiannopoulos represents a culmination of societal issues left to fester and, indeed, to make money from. Both should more open to darker-skinned women, because the impact on young girls is humongous. Thankfully, there are darker-skinned girls paving the way for others and showing them that they matter, that they are worthy, and that they are loved and can be loved. In honor of Jones facing the onslaught of the worst of Twitter and coming out on top (not only has Yiannopoulos been banned, but Jones is back on Twitter!), and as a way to say thank you to her for standing up for black women, especially dark-skinned black women, here’s a list of 15 dark-skinned characters who have defined today’s TV and film.