5 things Sherlock forgot about itself (and suffered for it)

As I was relaxing this past weekend, I was re-reading one of my favorite Sherlock fanfiction stories, and, since this particular story was written in between Seasons 1 and 2, I was reminded of all the cool stuff that made Sherlock such a great show to begin with. That made me sad.

“To call the show self-satisfied barely begins to convey how delighted it is with its own puerile posturing, its superficial cleverness, its tedious campery. Never have two writers been more intoxicated on the fumes of their own shallow talent than Steven Moffatt and Mark Gatiss.

The plot was incompetent. The dialogue was dreadful. The scenes were disjointed, the premise absurd, the ending made me want to reach for a plastic bucket and, most heinous of all, a classic creation was ruined.

Gatiss and Moffat may have just done what Moriarty never could, and finished off the marvellous character of Sherlock Holmes.”

Now, keep in mind that none of my feelings about this actually stem solely from the active and passive queerbaiting that makes up this show. That’s an even bigger issue (I’ve discussed it more in these articles). I’ll also say that unlike The Daily Mail‘s Christopher Stevens, I don’t think Moffatt and Gatiss are shallowly talented. I think their immensely talented when they aren’t, as Stevens said, “intoxicated on the fumes” of said talent. I think the first ever Sherlock episode showed us just how talented they are when they have a concrete direction for the character and the world he lives in.

Again, to quote Stevens, when Sherlock first premiered, it was “furiously watchable.” I can tell you myself that I was obsessed with Sherlock and was the hugest fans of Benedict Cumberbatch and Martin Freeman (not like I hate them now–I’m stI think where things got both lazy and self-indulgent is because they might have stopped seeing Sherlock as a loving homage to an enduring, popular character and more as their own playground to create their own detective show. Sherlock might be a creative spin on a legendary character, but it’s certainly not a show that can take its characters forgetting the core of who they are. Otherwise, why call it Sherlock?

There are five key things that the show forgot as it forged a path from “loving tribute” to “WTF!” and these five things are what defined what made the show great, fun, and new. If only

Sherlock‘s hyperfocus on 21st century technology: I read somewhere on Tumblr that Sherlock‘s claim to fame was its insistence on making technology a character. Indeed, that is what made Sherlock so cool. Sherlock Holmes was no longer a character relegated to the musty tombs of someone’s bookshelf. He was a hip, slinky dude in a cool overcoat with a ton of gigabytes on his cell phone.

Sherlock could solve entire cases, keep track of his homeless network of informants, and fabricate new identities on his phone, and we could see everything he typed on screen. And he wasn’t the only person on his phone; everyone was on their phones. And it was glorious, in a very 2012 “We’re in the future!” kind of way. Speaking of being hooked on technology:

Anthea: I love Anthea! I can’t believe she didn’t make it through to other seasons. I’m sure some might say, “What was the point of her? She was an irrelevant character!” Was she though?

Anthea was like the more relatable side to Mycroft, even though they were both mysterious. Even though you didn’t know what Anthea did outside of being Mycroft’s assistant, she was definitely an enigma you loved seeing on screen. Did it matter that we didn’t know what she did at the end of the day? The fun of the character was piecing together her life from the bits of info we did get and our own fandom imaginations. Anthea could be anything wanted her to be, from a spy (perhaps a more believable one than Mary) to Mycroft’s love interest (???) to just Mycroft’s assistant/secretary Mycroft hired because of his own adherence to the Mad Men days of British Intelligence. Whoever she was and whatever she was, she had a very important role in the show: to give John, as our straightman in this show of wayward characters, someone semi-normal to bounce off of. John’s first girlfriend served that purpose as well, and dare I say, I’d argue she was a more fully realized character than Mary because she wasn’t forced into an “I’m a weird person” archetype. She just was a nurse who lived life like a regular person. I did like her a lot and wished she could find someone who wasn’t tied down to a (wrongly) self-described sociopath.

The trio of Lestrade, Sally Donovan, and Philip Anderson: Lestrade is the only person to like out of this trio, but the trio itself had a purpose. Lestrade was an unwilling disciple of Sherlock’s almost always vouching for his methods and allowing him to do what he needed to do mostly unencumbered. But Donovan and Anderson made up the Tweedledee and Tweedledum of the police outfit. They both derided Sherlock and showcased their own ineptitude, making us more on Sherlock’s side when he decided to read them for filth about their infidelity and lack of smarts. In short, if the show wanted to be a dramedy, these two certainly helped the show fill that mold without the show twisting itself into a pretzel to be such. Were Donovan and Anderson characters you hated? Absolutely. But they were also characters you probably loved hating, in spite of yourself. They only made Sherlock seem that much more glorious of a character.

No mind palaces: I think this is pretty self-explanatory. The mind-palaces looked terrible and was the beginning of the self-indulgence.

John and Sherlock are at the center of the show and Sherlock’s uniqueness is celebrated, not erased: I think this is pretty self-explanatory too. Even when John had girlfriends, John and Sherlock stayed at the center of the show. It was all about Sherlock and John solving cases and growing their friendship. But the later season became more about…making Sherlock not who he was in the first season? That’s the best way I can describe it. I think the thing that resonates for me is that it seems like they were trying to make Sherlock into a type of person Sherlock clearly isn’t. Like is he supposed to be a drug addict? I’d say no one’s supposed to be a drug addict. But the question the show never really got into is why is he self-medicating? If the answer is “his brain is running too fast,” then why is his brain running so fast? And, should his fast-running brain be seen as a bad thing?

ALSO READ:  'This Is Us' Fans Want More Of Hai And Laurel's 'Amazing Love Story'

In other words, if Sherlock is not “neurotypical,” then why is Sherlock being himself a bad thing? Why should his character completely change?

Now, learning about friendship and such is one thing—I’m not saying Sherlock has to remain afraid of getting close to people. But couldn’t he have learned about true friendship without completely turning into Benedict Cumberbatch doing a Sherlock impression in later seasons? Like, just because Sherlock doesn’t like having tons of friends or even likes socializing doesn’t mean he’s a broken thing that needs fixing. John himself didn’t try to fix Sherlock; all he did was befriend him where he was. To Lestrade’s credit, Lestrade also didn’t try fixing Sherlock, even though he knew Sherlock could be an even greater man than he already was with the proper nudging. But in any event, becoming “great” doesn’t mean learning how to act neurotypical, which is what the seasons seemed like they were suggesting.

Instead, what could have been great is if the show explored the beauty John found in Sherlock’s way of thinking, something that was actively explored throughout the first season. If there was anything close to a romantic love, it was John seeing the world through the eyes of Sherlock, and he realized he liked the excitement that Sherlock’s way of doing things presented to him. If all of the seasons had been exclusively about John, a neurotypical person, accepting and reveling in Sherlock’s wonderful mind, then I think this show would be well on its way to a fifth season. Instead, the show got high off its own success instead of sticking to character. And lo, the writers forgot what made Sherlock special; his uniqueness and his special bond with John, whether that’s just deep friendship, romantic, or whatever else.

BONUS— Sherlock’s purple shirt (or as the fandom lovingly described it, “The Purple Shirt of Sex”): Come on, y’all. That purple shirt was THE BUSINESS. Must I remind you: 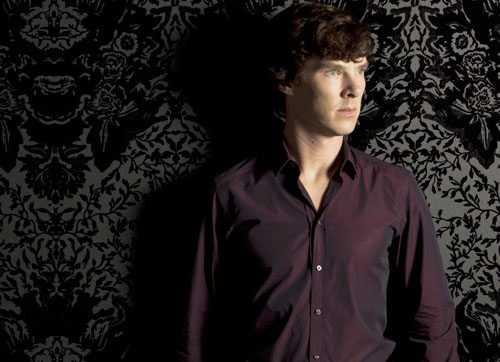 COME ON! I’m telling you I used to be a Cumberbatch fangirl! The purple shirt deserves its own Twitter account and the stylist for that season should be given an award for their color wheel skills. Purple is definitely a color Cumberbatch should wear more often, but only if he’s dyed his hair brunette/black. Maybe I’m more of a Sherlock fangirl than a Cumberbatch one…I don’t know.

In any case, what do you miss about early Sherlock? Give your opinions in the comments section below!