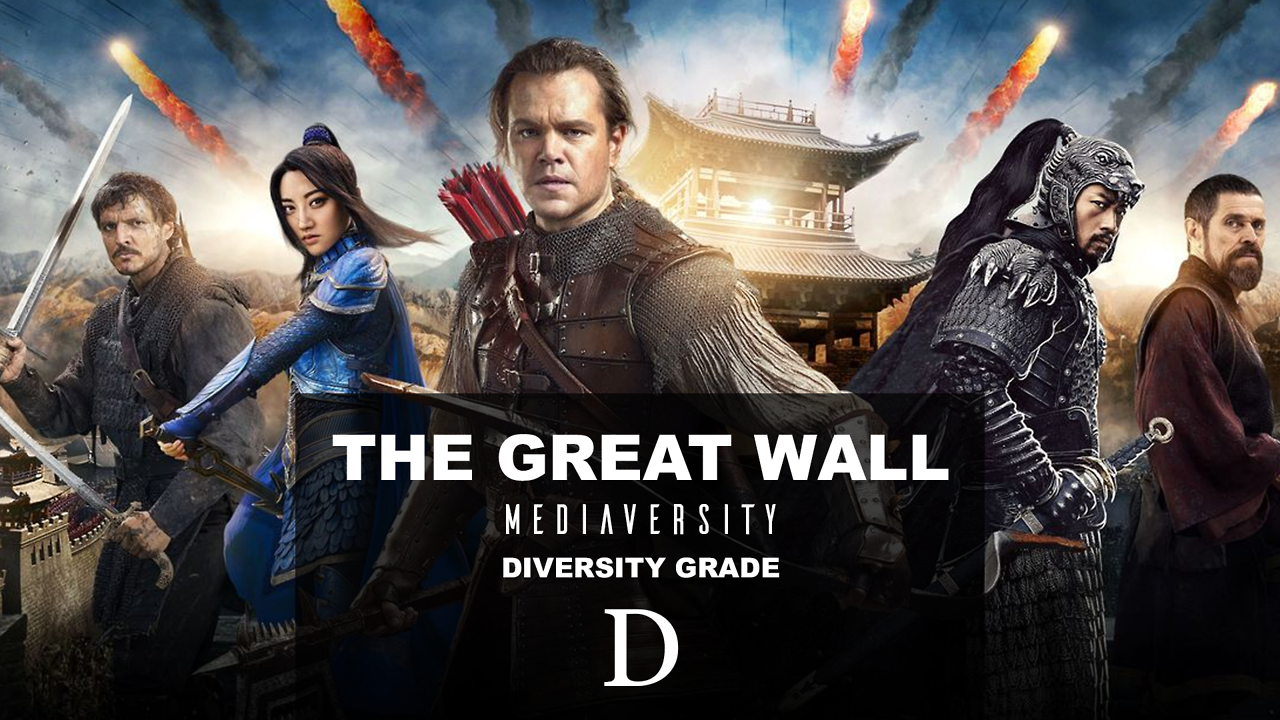 “Matt Damon swoops down on a balloon and saves her with my favorite line of the movie, “And here I am,” with all the non sequitur his very presence in this entire film brings.”

Quality: 1.5/5
Jesus, this movie is bad. It’s so bad that it does a 180 and starts to become hilarious, in the vein of Tommy Wiseau’s The Room or pulpy, IDGAF films like Snakes on a Plane or Sharknado. So I gave it a half point for accidental comedy and shiny costumes.

Gender: 4/5
Does it pass the Bechdel Test? NO
One name: Jing Tian. She was amazing. I want an entire film with just her being a BAMF. I wish she got to fight more. One of the most anti-climactic scenes involves mounting tension as she finds herself surrounded by aliens. I thought a brilliantly-choreographed brawl was ramping up, as per Yimou Zhang’s previous films Hero or House of Flying Daggers, but instead Matt Damon swoops down on a balloon and saves her with my favorite line of the movie, “And here I am,” with all the non sequitur his very presence in this entire film brings. The meta!! Oh god, I laughed so hard.

Beyond Jing Tian, though, any semblance of feminism drops off a cliff. Literally, the other women are these weird lady killers who jump off giant fans and bounce on strings, poking at aliens with oversized toothpicks. It’s hilarious, but hardly empowering.

Race: 2/5
Yes, this is a White Savior movie. Asian soldiers literally say things like “thank you for saving my life” to Matt Damon. So if you balk at understanding that this is a textbook White Savior film, you need to get off this train and board the next; I have more interesting things to delve into like the historical and modern contexts of this controversy.

A quick note to Matt Damon’s whining that this is a fantasy film: yes, it’s a fantasy film. We’re not idiots, we’re not annoyed because we think Irish people (or whatever that accent was) shouldn’t be in fictional China fighting aliens together. We’re annoyed about what isn’t fictional: decades of Asian actors being deleted from their own stories via:

Keep in mind, I only had to think back 2 years to pull up those gems. Now, imagine decades of erasure, and then tell me people of color should take a chill pill with The Great Wall.

Where the film does deserve some lenience is in considering the real-life context of this film. Although the writers were all white men, with illustrious whitewashed films such as The Last Samurai or Prince of Persia under their belts, the director of The Great Wall is about as Chinese as you can get: Yimou Zhang is a beloved director in his country and was even tapped by the government to choreograph the opening and closing ceremonies to the Beijing Olympics. I find it more sad than offensive that the Chinese think Matt Damon’s clumsy injection would endear The Great Wall to Western audiences. I appreciate their risk-taking, as producers experiment with different ways of appealing to China’s increasing market share; however, I can only hope that in the future, film studios find a more elegant way of doing so.

ALSO READ:  ‘In the Heights’ celebrates the resilience Washington Heights has used to fight the COVID-19 pandemic

Finally, also in the “Good” category, the film is fit-to-bursting with Asian actors. I am always going to be in favor of something that gives non-white actors the chance to be seen by a large audience, and to get paid for their work.

LGBTQ: N/A
No representation but too short a program to ding them for it.

Mediaversity Grade: D 2.5/5
Jing Tian slays in the Gender category and I want to watch her anime-character face in everything. Race is not as bad as the trailers make it out to be, especially when considering a Chinese director and mixed group of executive producers were involved in the casting of a white lead. But once you stop making excuses for it The Great Wall is about as literal to the White Savior trope as you can get.

Between bouts of coma-inducing expository about black powder, The Great Wall strings together fun, war-faring music videos set to cool costumes and silly, CGI carnage. Several elements such as Matt Damon’s pseudo-Irish accent, his saving of Asian after Asian, or the breakout roles of magnets and balloons in this film, all combined into one of the funniest things I’ve watched in awhile. I’m not going to sugarcoat it though, the source of much of my incredulous laughter came from a gut-deep place of absurdity as I watched Chinese men get erased, over and over again, both physically on screen by bombs, or by the lifelong media narrative that tells us that at best, Asian guys can be cool and strong but ultimately, it takes a white man to outsmart the enemy. #ThankYouMattDamon