Mediaversity Reviews: “Get Out” 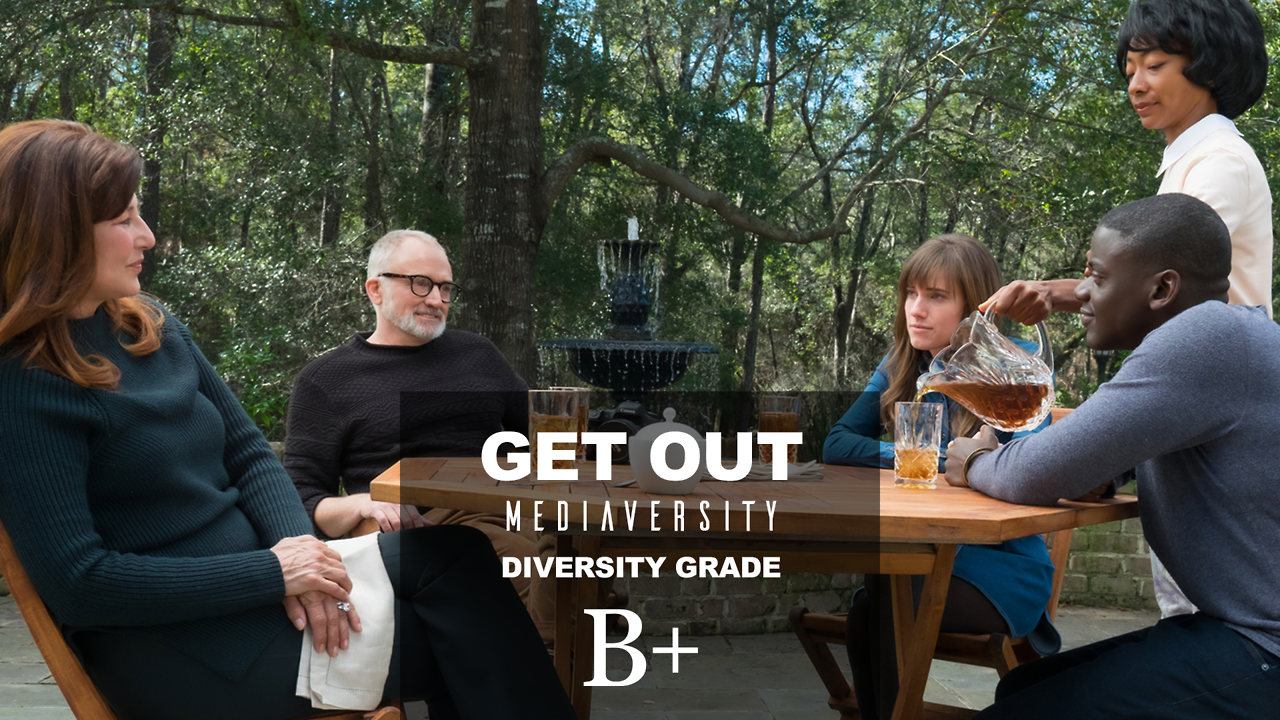 Quality: 5/5
Get Out lives up to the enormous hype. A plethora of traditional film reviews can speak to the nuances of the writing, directing, genre-bending, and historical and social contexts, so I’ll just leave you with a succinct quote from Paul Whitington’s review in the Irish Independent:

“Get Out is so clever you could write a thesis on it the length of War and Peace.”

Gender: 2.5/5
Does it pass the Bechdel Test? NO
While none of the female portrayals were offensive, their screen time, number of speaking roles, and levels of sympathy were dwarfed by those of the male characters. Look, Get Out has no interest in discussing feminism or gender equality. But that isn’t a bad thing. On the contrary, a tightly-executed film with a narrow focus is often stronger than a film that tries to do too much.

In this vein, similar to my feelings on Donald Glover’s TV series Atlanta or Barry Jenkins’ Moonlight, I might love and support Get Out wholeheartedly but would be remiss to score it above a middling grade on Gender.

Race: 5/5
Peele points his finger at American society and lets us know that, dammit, the emperor has no clothes on. White America might look relatively harmless in 2017 (or, at least it did in 2016), but underneath all that self-congratulatory noise about living in a post-racial society, Peele makes the convincing case that white Americans have craved ownership of black bodies for the entirety of our country’s violent history and continue to do so.

He challenges the notion that we’ve made any progress at all. Is today’s coded control of black communities via rigged legal systems, disproportionate levels of incarceration, and cultural appropriation actually any better than literal slavery? It’s a topic few are able to unpack, especially in less than two hours, yet somehow Get Out winks at centuries of painful history and honors it with an absurd, no-bullshit de-pantsing of race in America. No sin is left unturned—every small micro-aggression hints at entire tragedies such as police brutality or sexual objectification, and Peele even finds time to comment on Asian participation in anti-blackness through a single line, as detailed by Ranier Maningding on NextShare.

Meanwhile, one of the most complicated and internal struggles minorities face, cultural appropriation, gets an onscreen embodiment as well. As Amandla Stenberg explains, “Appropriation occurs when a style leads to racist generalizations or stereotypes where it originated, but is deemed as high fashion, cool, or funny when the privileged take it for themselves.” For the black community, this could look like Miley Cyrus wearing cornrows and twerking, profiting immensely from the controversy. For Asian-Americans, this could sound like studios who say they are “paying homage” as they profit from Asian stories (Ghost in the Shell, Altered Carbon) or stereotypes (Iron Fist, Last Samurai).

Cultural appropriation is so insidious because of its blurred lines between “inspiration” and “theft” which are especially difficult to navigate for those in societal positions of power. All the more reason Get Out feels so necessary; it finds a way to bridge this disconnect, giving viewers a peek behind the curtain of the minority experience where they can feel for themselves the horror of having one’s identity and agency robbed from them for profit, victims able to do naught but watch on helplessly from the Sunken Place.

By the end of the film, we see the ugly guts of America’s racial history spilled out on the streets and are left with no choice but to leave the theater, chuckling a bit but thinking a lot.

LGBTQ: N/A
No representation but too short a program to ding them for it.

However, due to the allegorical nature of Get Out, I found that the racial anxieties explored in the film could be used as a thought exercise for other marginalized groups—for example, the experience of being queer in America. In the same way Peele suggests we lose some of ourselves by “acting white”, is there a similar loss of identity when LGBTQ individuals “act straight” or attempt to “pass”? What’s more important to us—celebrating our vibrant cultures and fighting for acceptance while staying authentic, or do we take the path of least resistance and lobotomize ourselves in order to assimilate into straight and/or white America for access to social and economic opportunities?

ALSO READ:  From Monique's Desk: Mulan Is Back!

Through the lens of the black experience, Get Out presents the tension between the self and the performance for society—of having a double-identity. But this tension is hardly limited to black individuals; rather, it’s an overarching hallmark of the marginalized experience, whether that means being a woman worried about sounding too aggressive during a meeting, or an introvert trying not to seem “anti-social” at a party. Herein lies the magic of Get Out: it strikes a chord with so many viewers and in such personal ways.

Mediaversity Grade: B+ 4.17/5
Jordan Peele sows the seeds and we water, nurture, and let bloom our own ideas of what Get Out means to us. Are we the oppressed, like Chris, who just want to live our lives without being interrupted by the crime of existing? Or are we the inadvertent oppressors, who awkwardly code-switch when we meet black individuals? More interestingly, are we both? For an Asian-American such as myself, I relate to the minority experience of being used and erased by white America, yet I also recognize the relative economic privilege of East Asians and the fiscal conservatism of my own parents—positions that sustain systemic oppression of low-income communities.

Get Out is the mirror held up to our faces that forces us to to pause and think about our own culpability in contributing to cultural tensions. The virtuosity with which Peele weaves together this complex social commentary with genuine comedy alongside eerie, horror-flick thrills, is impressive to say the least.

Mo’ Reviews: ‘Effigy, Poison and the City’ Is A Fascinating Slow-Burn

‘A Shot Through The Wall’ Star Kenny Leu On Police Brutality, Wedge Politics And Belonging