I’ve recently become a fan of Jaymes Mansfield from her YouTube page, and after seeing how lively, bubbly, energetic and knowledgeable she is on her channel, it’s a shame none of it translated to the Drag Race stage. Jaymes already knew she was in her head too much, but she just couldn’t shake whatever shellshock she had. I’m not knocking her for it, though. As an introverted person, it sometimes takes a while for us to get used to a new environment, and in the meantime, we’re left looking and feeling like a shell of ourselves. That’s what happened to Jaymes here. All of the girls (well, almost all of them) seemed to understand that and tried to help her out as best they could, but ultimately, the real challenge was up to Jaymes and she just couldn’t get out of her own way enough to really shine. She’ll be fine, though–she’s got tons of fans, and she’s garnered even more after folks sympathized with her during her short time there.

However, wouldn’t it be amazing if Jaymes got the Trixie Mattel save and was brought back for a second chance? That would be spectacular!

Speaking of second chances, how great is it to see Ms. Cucu, Cynthia Lee Fontaine, back again! I’m a big Cucu fan, so I’m excited to see her energy on this season. It’s especially great to see her healthy after her liver cancer bout. I’m glad she was able to overcome this serious disease and come back to her full vigor. 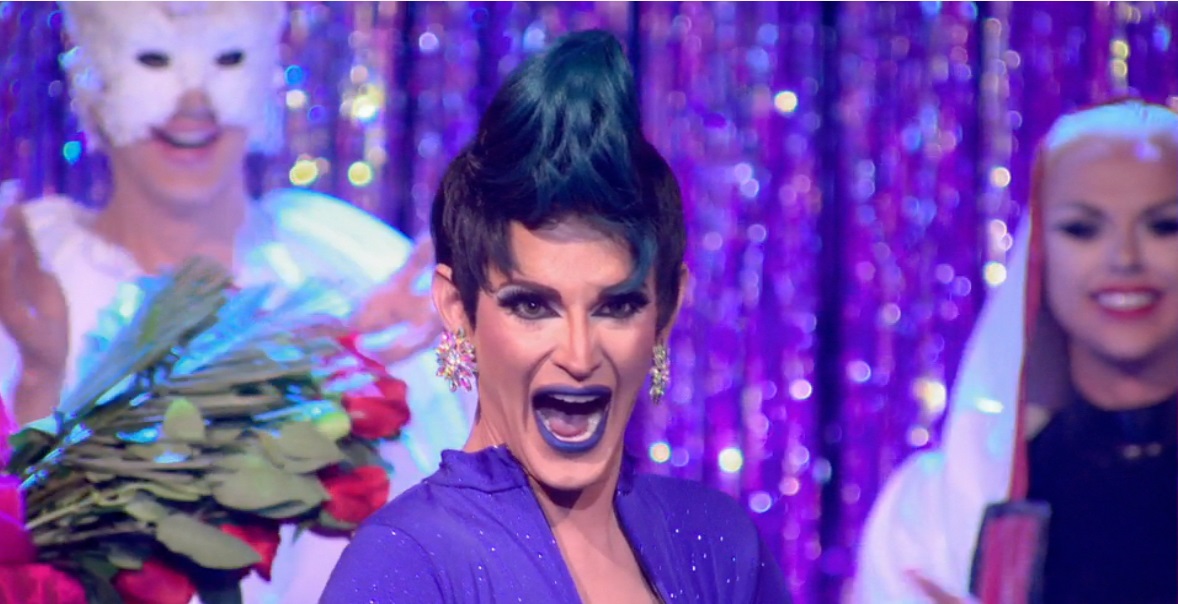 This challenge was all about vigor, since it was a cheerleading challenge, but not where the queens just had to look like cheerleaders–they actually had to perform real cheerleading moves. As Nina said during Untucked, that was the most strenous challenge yet on Drag Race. I’m almost surprised they let that one be a challenge period, much less the first challenge, since it requires skills not everyone has, like doing splits and cartwheels and stuff.

However, like true professionals, everyone rose to the challenge and did what they had to do. Even Jaymes, who did some really athletic-looking tumbling. However, I have to say that while Valentina gave great Overcaffinated Cheerleader Face, Shea Couleé really gave me Real Girl Cheerleader. I didn’t go to a black school (unfortunately), but I feel like I would have seen cheerleaders like Shea Couleé at the black high school of my dreams.

She was also a very strong contender to win; in fact, most of the girls thought was going to be Shea Couleé’s win, what with her living out her Dominique Dawes childhood fantasy with a ton of flips and splits. Also, her White Party look was really strong, too. But the win ended up going to Valentina, who mesmerized the judges with her zany cheerleader persona and stunned them with her bridal look, which is based on her own mother’s wedding video.

Since I’m talking about the White Party Looks, let’s just get into my favorite looks, which are a lot. All of the looks were strong; this might be the first season in which all of the first runway looks for competition were this strong. 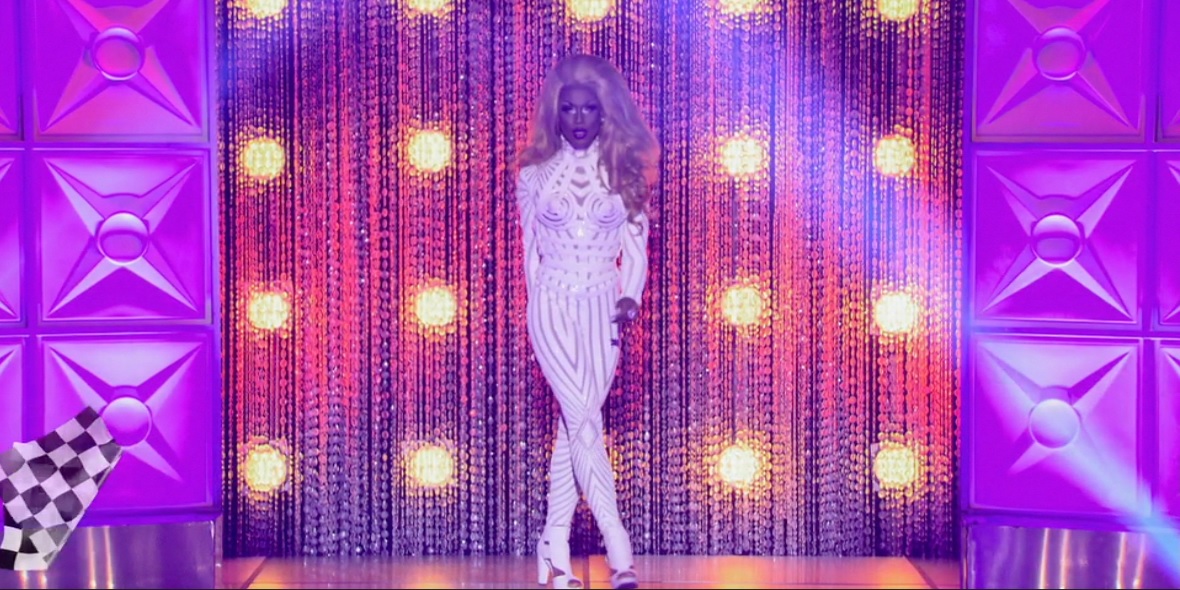 As the judges (which included the B-52s this week) said, this was a very Barbarella moment. It’s executed flawlessly, and she looks like a supermodel in it. 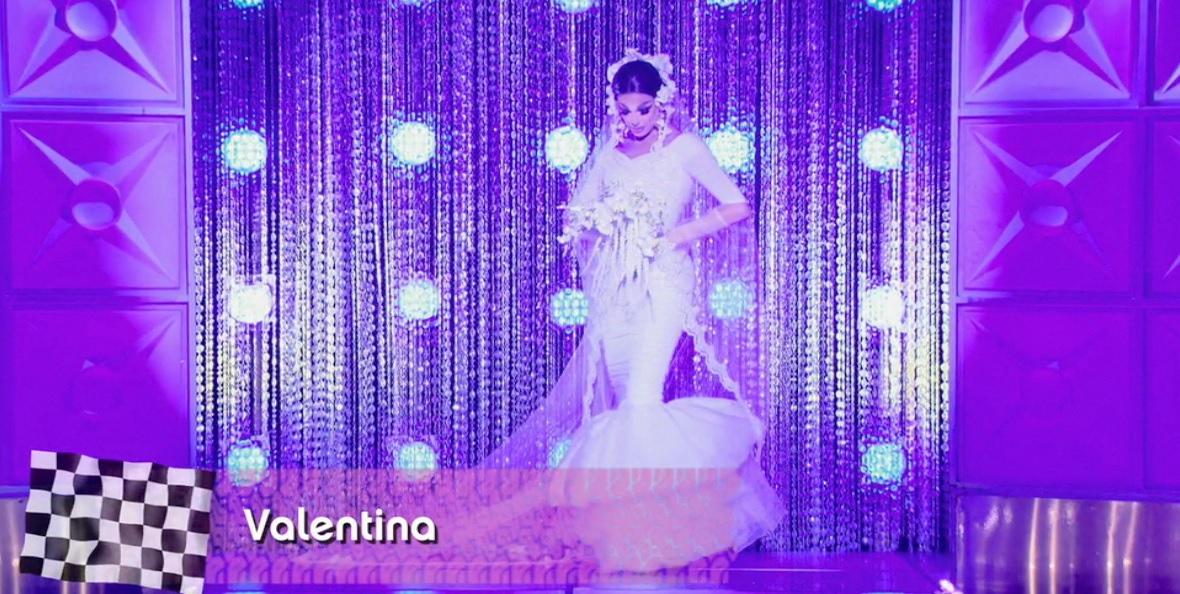 Again, another flawlessly-executed look. If Michelle Visage hadn’t pointed out Valentina’s nude shoes, I don’t think anyone would have even noticed. At least, I wouldn’t have noticed. In any case, if that’s all she had to complain about, I think that’s a clear win for Valentina. Besides, this is ode to her mother and her parents’ love. You can’t really get too mad at her for this, especially when it looks not only amazing, but expensive and luxurious. 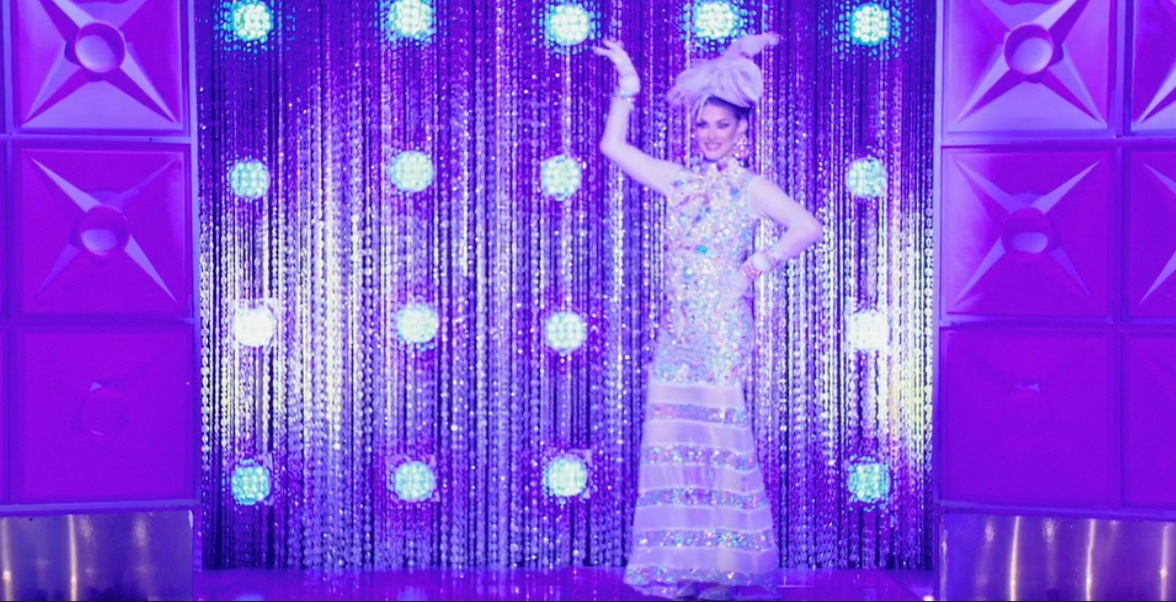 Cynthia really gave us a My Fair Lady moment with this outfit, and I think it’s the perfect outfit to use as your comeback dress. I feel like we’re going to see a lot of fun, gorgeous stuff from Cynthia this season. 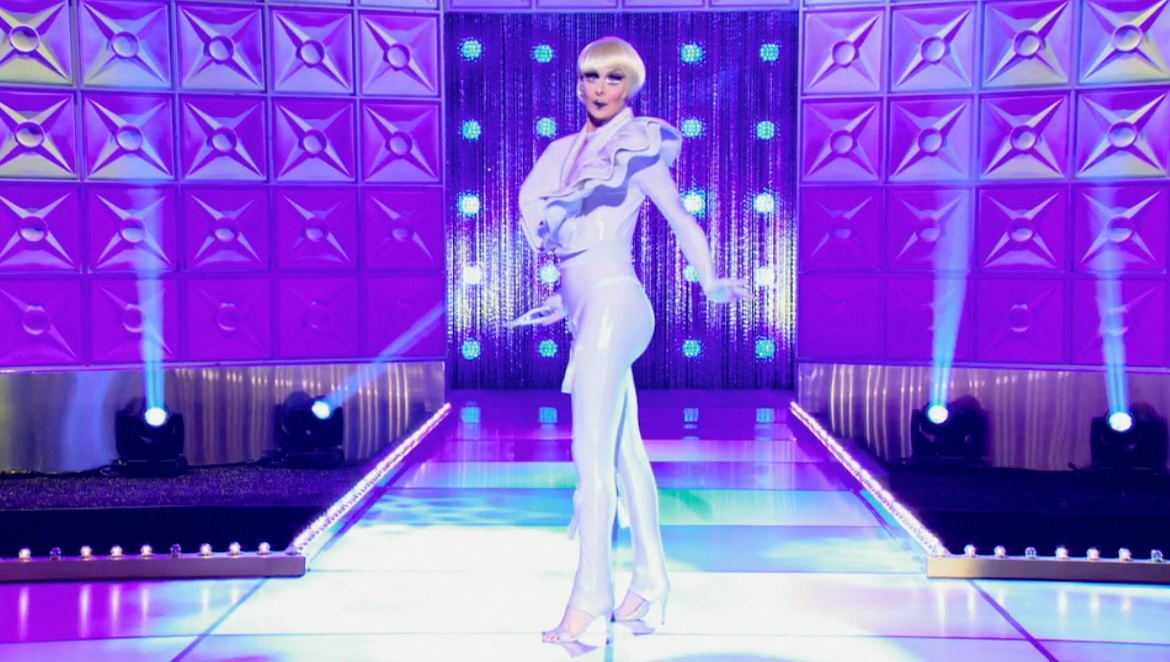 Trinity Taylor is someone I haven’t mentioned a lot, but I’m rooting for her as hard as I am other queens. She’s a Birmingham, AL queen who has made it to the national stage, and even though she’s repping Orlando on the show, I have to keep an eye out for a hometown girl. So far, she’s done the city proud and she’ll keep doing it if she’s consistently turning out looks like this. If there’s one thing I can say about Trinity is that she has an extremely high level for commitment to an uncomfortable look. If you’ve seen her Season 9 premiere party performance (and I’m sure other performances out there), you have seen how severely she tucks, to the point where it looks like she has a va-jay-jay. She’s not called “The Tuck” for nothing. This look continues that throughline of commitment, because this is all vinyl. How she can stand it, I’ll never know. 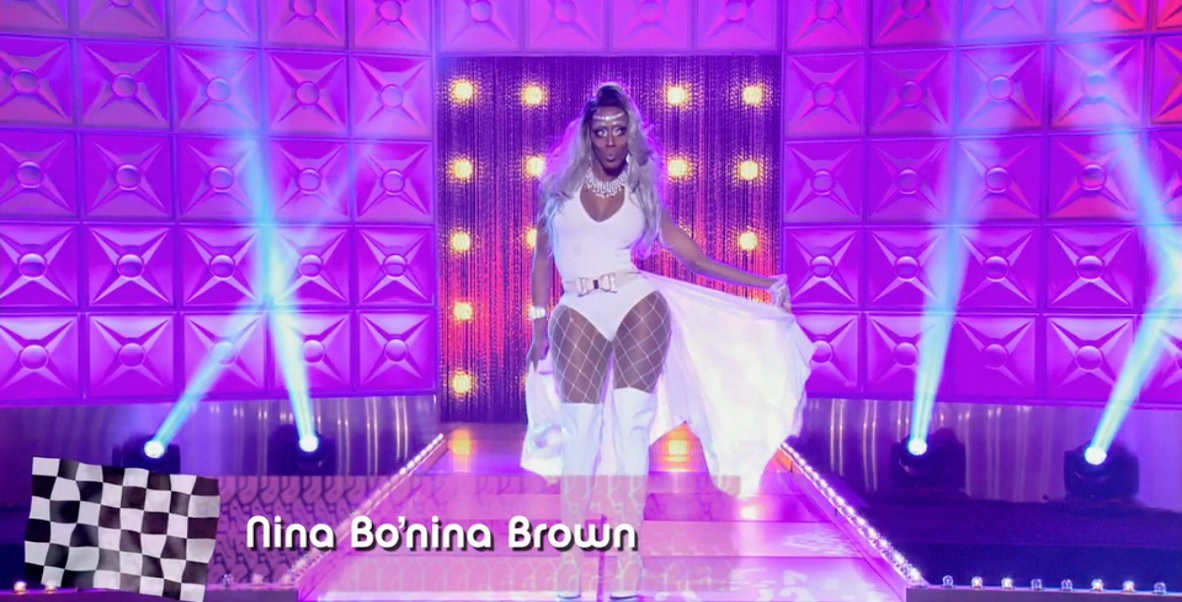 This is giving me a “Storm at a P-Diddy White Party” vibe, which I’m a big fan of. She looks amazing, and that hair color is really something special; I’m glad she went with an unexpected gray. 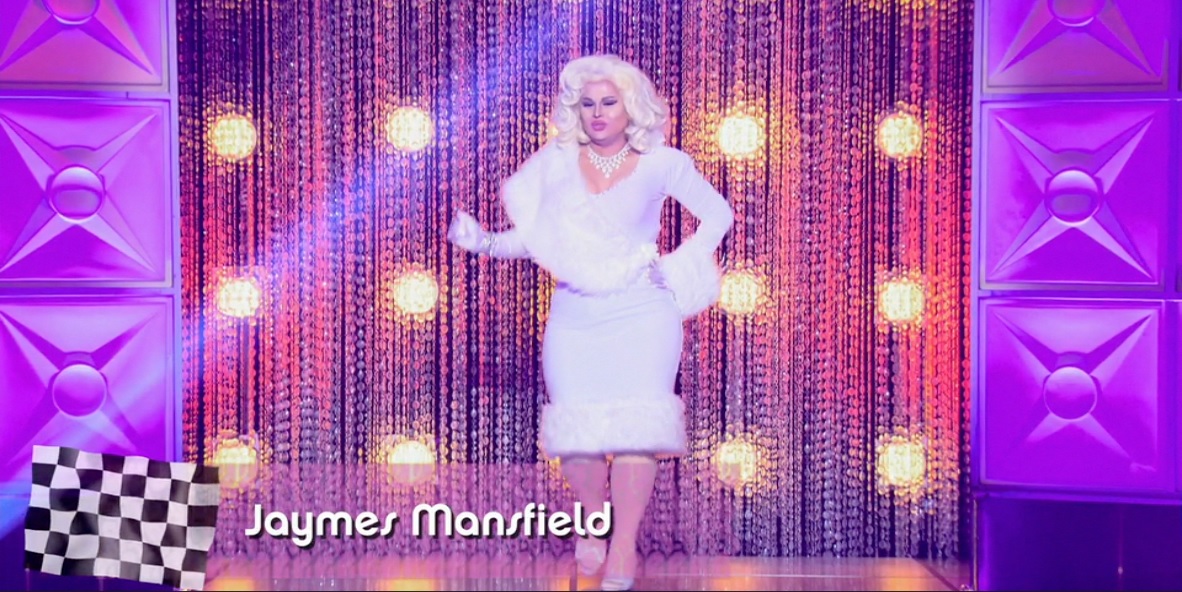 Jaymes might have gone home this episode, but I think he had one of the strongest runway looks. Who doesn’t like a well-done late ’50s/early ’60s pinup look? I love it, since this is Jaymes Mansfield at her most Jayne Mansfield. The judges are also right that Jaymes is one of the best padders (is that a word?) in the race. 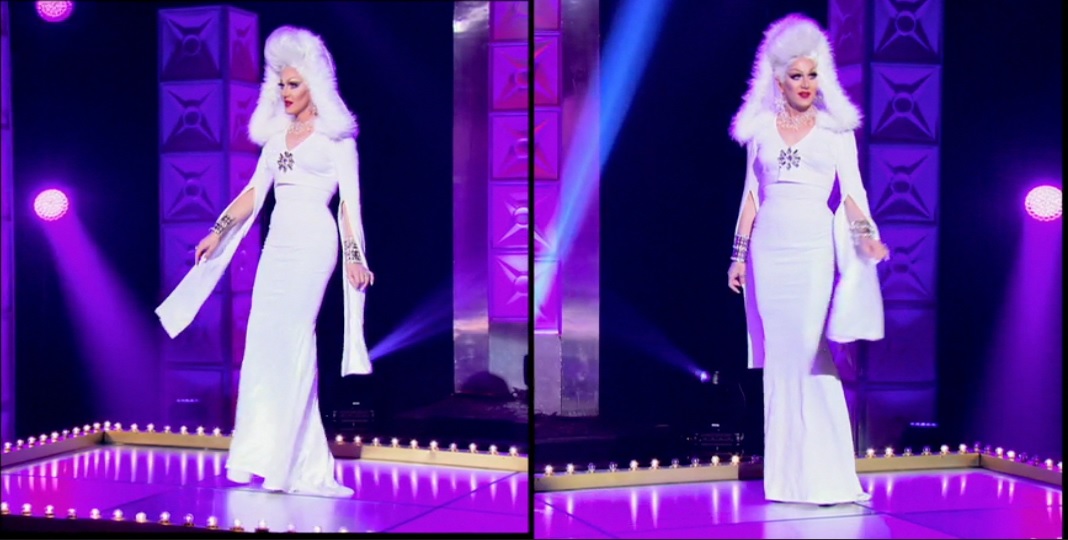 I really like the detail in this dress, particularly that faux-two-piece look. I love a high-waisted skirt or pant, and I love to see it especially when it’s executed expertly.

Also, let’s talk about how the commenters are ablaze with love for Charlie for telling Eureka to shut up in Untucked. I think some of it was Charlie’s own frustration at being in the bottom and his fear of being ousted because of his age, but I also think he was genuinely frustrated with Eureka and has been for some time. I’m not going to get into severe Eureka discussion right now, but Eureka is quickly becoming this season’s hated queen, if the comments are anything to go by.

The bottom two were Jaymes and Kimora Blac, who had to lip synch for their lives. I thought Jaymes would be able to get something out of this performance, since she’s campy and the B-52s are nothing but pure camp, especially their most iconic song, “Love Shack.” But instead, she copied Kimora, who, if her Season 9 performance is anything to go by, isn’t the best performer. But I have to hand it to Kimora; she gave the judges personality and a palpable desire to stay, and that’s what RuPaul was trying to coax from Jaymes. Darn it, Jaymes!

It was sad to see him leave the show; his Untucked departure was particularly tough, seeing how torn up he was about his performance and how he felt his dreams came undone. This is why I feel like we’re in for a surprise with Jaymes. I seriously think she’ll be back.

• Hearing Peppermint’s story about finding acceptance after a horrible high school ordeal and Cynthia’s story about battling cancer are the reasons RuPaul’s Drag Race has an Emmy. I love when the show decides to get real and give viewers an insight into the real lives of these contestants. It’s not always about glamour and fabulosity; sometimes, it’s about overcoming bigotry, finding acceptance, and overcoming what seem like insurmountable obstacles. It’s moments like these that show how much of a role model drag queens are.

• I’m glad I was able to being somewhat professional with this recap and not make it a pure gush-fest over Valentina. I’m torn between idolizing Valentina as a woman and harboring a crush on Valentina as James Leyva the man. It’s a battle of emotions right now. A result of that is screencapping a ton of Boy Valentina images.

The beautiful people of the world can be really frustrating, can’t they?

• Last, but not least–we’ve got the first RuPaul in Drag moment! 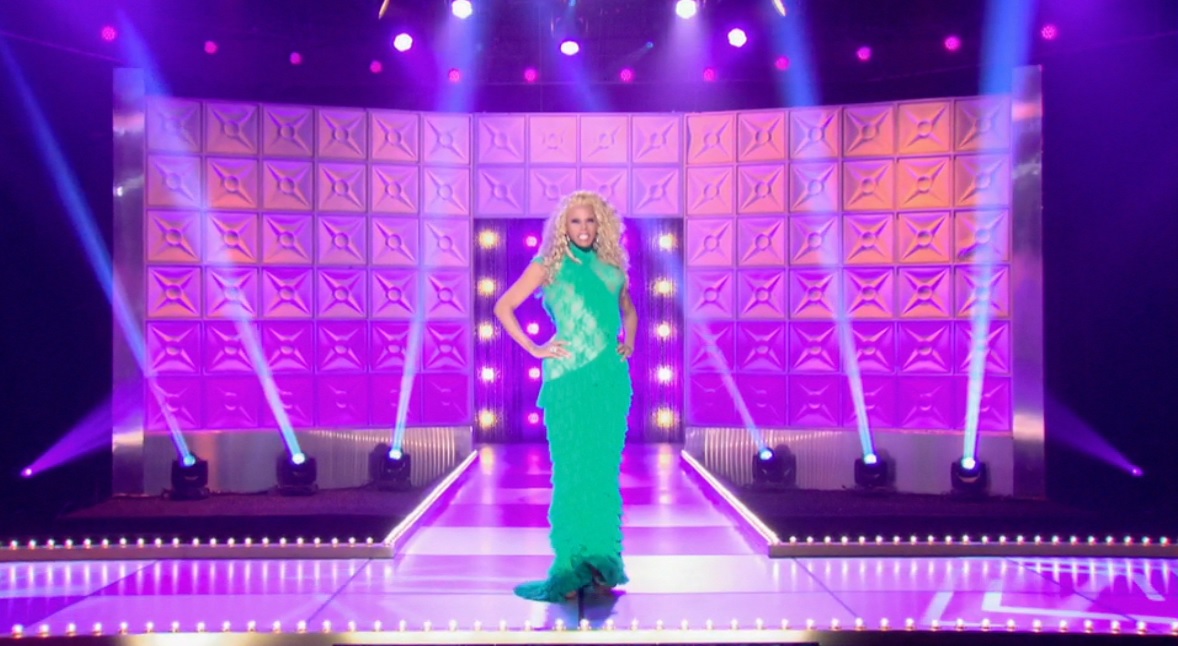 I thought, oddly enough, that this was demure and covered-up for RuPaul. Not that she’s always naked or something, but something about the dress looked understated, even though it was a loud cyan-teal. In any event, it’s not RuPaul’s Drag Race without RuPaul as The Monster, and it’s good to see her continue the tradition.

What did you think of this episode? Do you think Jaymes will come back? Give your opinions below!