Hugh Hefner, the founder of the long-running Playboy Magazine empire, has died at age 91. I haz a sad.

First of all, before anyone decides to come for me for saying I’m a little bummed, YES, I know that Playboy is based on a sexist and, frankly, racially-biased interpretation of feminine beauty–regardless of Hefner wanting to appeal to the James Bond “lascivious gentleman” aesthetic of the 1950s and 1960s, Playboy, and the aesthetic it played upon, showcased women from the male gaze, and that’s putting it mildly. Also, despite Hefner being a supporter of civil rights and providing a platform for Malcolm X (who was interviewed for the magazine by none other than future Roots author Alex Haley), the track record for notable black Playboy models is bleak. The first black Playmate of the Month, Jennifer Jackson, made her debut in 1965, 12 years after Playboy was founded and first published. The first black Playboy cover model was Darine Stern in 1971, and according to Wikipedia, there are only 29 black Playboy Playmates of the Month (not counting Playboy‘s regular pinup shots), and the first black Playmate of the Year was Renee Tenison in 1990. (Complex has a good article on 25 of those Playmates.) In case you need more proof that Playboy has been behind the eight-ball in the area of representation, the magazine has only just had its first Mexican-American Playboy Playmate of the Year in 2013 with Raquel Pomplun.

I understand all of the issues surrounding Playboy and Hefner. And yet, I am a little downtrodden. As horrific as it might sound, generations have grown up with the presence of Hefner in his Playboy Mansion. For better or worse, he was a huge part of our pop culture fabric. And, despite all of the facts I laid down about Playboy‘s racial issues (and some I didn’t, like the fact that the majority of the black Playmates of the Month range from light beige to toffee-colored, further pushing a colorism narrative), there’s one Playboy fact involving the black image that goes routinely unnoticed–the iconic look of the Playboy Bunny comes from the mind of a black woman.

Zelda Wynn Valdes is who you have to thank for the classic Playboy Bunny costume, a costume so ingrained in our psyche that the silhouette alone tells you what you need to know.

Valdes, who died in 2001, opened the first African-American owned boutique, Chez Zelda, in Manhattan  in 1948 (the shop later moved to Midtown in 1950). She dressed some of the biggest names of the ’40s, ’50s, and ’60s, including Dorothy Dandridge, Mae West, Ruby Dee, Marian Anderson, Josephine Baker, Eartha Kitt, Jessye Norman, Gladys Knight, the entire 1948 bridal party of Nat King Cole and Marie Ellington, and “the black Marilyn Monroe,” Joyce Bryant. She also served as the President of the New York chapter of the National Association of Fashion and Accessory Designers (NAFAD), an organization founded by Mary McLeod Bethune. Later in life, she also designed costumes for the Dance Theater of Harlem. She started working with the company in 1970 and continued there until she died at the age of 96.

Valdes’ flattering, sexy, body-hugging designs garnered Hefner’s attention, particularly because, I’m sure, he was opening his Playboy Clubs and needed costumes for his waitresses. The original idea for the bunny costume might have been conceived by the Playboy’s director of operations Victor Lownes, but it took Valdes’ flair and artistic eye to bring that idea to fruition. Also, Valdes’ Playboy Bunny costume became the first service uniform registered with the U.S. Patent and Trademark Office, furthering Valdes’ legendary status.

Or, rather, it should be a legendary status. Valdes’ contributions to Playboy, and to fashion in general, seem to go unnoticed by society at large, and that’s a shame. Valdes helped shape the idea of a glamorous woman through her high profile clients, and for better or worse, she helped shape the ideal image of the the Playboy Bunny and the conversation we have about beauty and body image.

This is where the history of the costume gets into the weeds, since, ironically, the image of the standard Playboy Bunny is this:

Despite the fact that the design was brought to life by a black woman.

There’s also a ton that can be said about the rigorous dieting the Bunnies must have had to be on to be able to successfully make it through pre-shift weigh-ins (wherein they could only gain or lose a pound), not to mention dealing with blatant objectification. Activist Gloria Steinem famously wrote about her time as a Playboy Bunny in an article called “A Bunny’s Tale,” which was published in Show Magazine in 1963. In the article, she outlines how degrading and sexually exploitative it was to work as a Bunny. Some of those awful working conditions seemed to be alluded to in the 2011 failed NBC Mad Men-esque drama The Playboy Club. Despite the fact that the show never quite got off the ground in terms of storytelling, it did, however, provide our best modern look at the Playboy Bunny costume in action, giving us an idea of what it must have looked like to see the costume at work in its heyday. Despite the awfulness surrounding the clubs themselves, you can’t deny that these costumes don’t have a touch of glamour, and even mystery, to them.

The instantly iconic look of the costume is why you always see it every year at Halloween or any type of costume party. Heck, if you’re an anime fan, you’ve probably seen this costume on several anime characters, the most notable character possibly being Bulma from Dragonball. 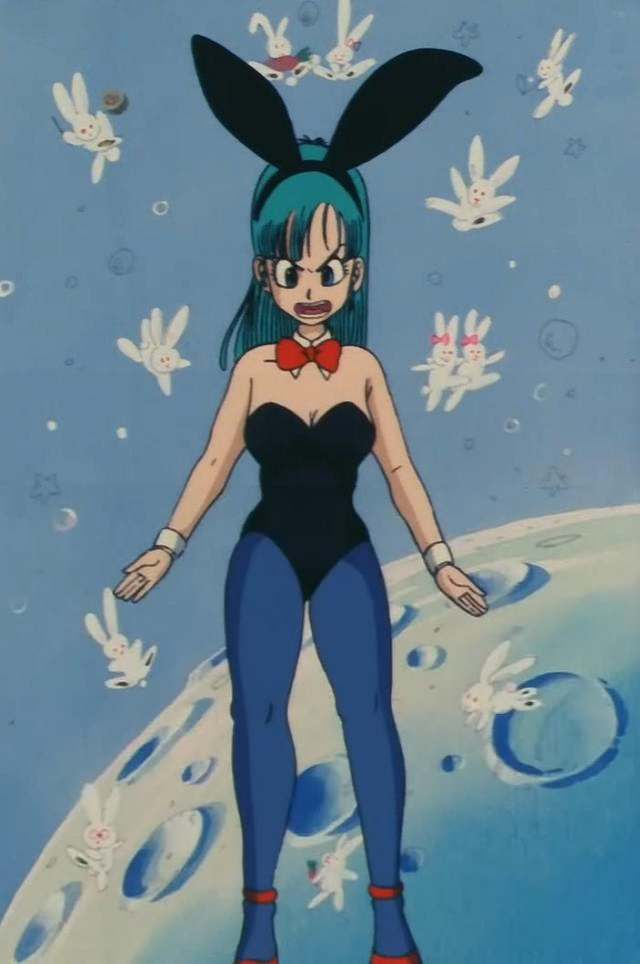 The Playboy Bunny suit has not only domestic, but international appeal. To me personally, it just looks cool. Somehow, Valdes was able to imbue playfulness, sexiness, allure, and a coquettish sensibility all in a corseted teddy, black sheer stockings, and bunny ears.

Playboy, the Playboy Clubs, and all the other trappings of Playboy Enterprises all revolve around the salability of the woman as a product, it’s true. There are tons of articles that can be (and have been) written about Hefner and his sordid, yet weirdly marketable empire of T and A. While the news of Hefner’s death is fresh, you should be able to find tons of articles out there that can supplement this one with all of the hot takes you need. Twitter alone will provide you with multiple angles on Hefner’s life and the complicated legacy he leaves behind.

At the end of the day, though, if there’s anything that can be said about Hefner, it’s that he didn’t build his empire alone. He, like most American “self-made” men, built it with the help of a talented black woman. One of these days, I’m going to don the Playboy Bunny costume to a Halloween party in Valdes’ honor. If only I could get over showing my upper thighs. 🐰