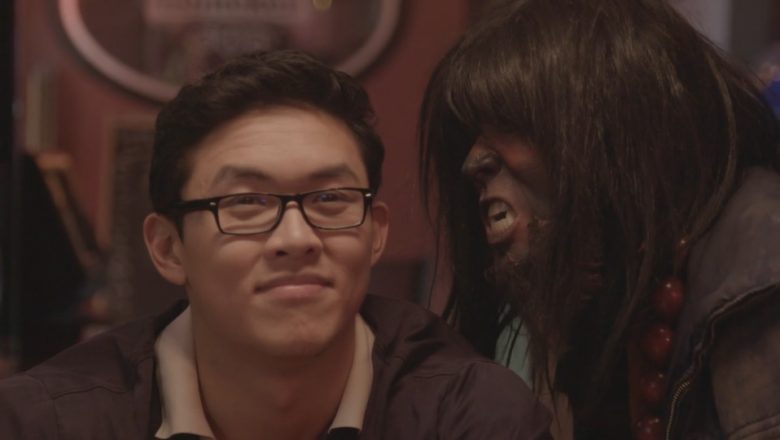 Munkey in The City is a whimsically poignant dramedy series about a delusional young novelist in search of a dream–of fame, of fortune, and the pursuit of happiness. But he also brings the one thing standing in his way: himself. His name is MUNKEY, and he’s learning that The City is one big jungle he needs to survive.

Munkey dreams of writing the great American novel. The problem is, it’s already been written. He’s also looking for love in all the right places, but he’s just the wrong person. And just what is that thing that’s following him?

Determined yet confused, hopeful yet awkward, he comes to The City, one of the most vast and wildest places on Earth, in order to “make it.” On his journey, he struggles to connect with the people around him, escaping instead through alcohol, drugs, and his own writing. Through much trial-and-error, and with the help of an eclectic band of friends, Munkey must come to realize his own purpose in life, before The City swallows him whole. Though he soon realizes that the singular Evet is the key to unlocking his full potential and future.

Can our hero make it out alive with his sanity intact? Possibly not. But he’s going to try anyway.

Munkey in the City, the debut webseries from Michael T. Nguyen, is one that deftly weaves surprising turns of mystery and surrealism into a coming-of-age meets fish-out-of-water story about a young man who wants to find himself. The only problem is that he keeps getting in his own way.

The hero of the story, Munkey (Kenny Leu, who will be seen next in National Geographic’s miniseries The Long Road Home) is a man who is scared to use his own voice to make his mark in the writing world. Instead of coming up with his own story to sell to a publisher, he keeps rehashing the plots of famous ideas, plots he knows have found an audience. His creative struggles mirror his personal ones, as he’s a man who has no bearing on his place in the world or who he’s meant to be. These struggles are made known in overt ways, from his alcoholism, has failure with the ladies, and his severe lack of style (except for the glasses–I actually like the glasses, unlike other characters in this show). But there are also unspoken ways we see him struggle, from being adopted into a white family, his fear of adapting to a big, bustling city, and his fear of facing himself.

That’s where the Munkey King comes in.

The Munkey King (spelled that way on purpose) acts as Munkey’s aggressive conscience. The aggression is because Munkey is intent on not listening to it. Each time  the Munkey King tries to show Munkey things he has to face, all Munkey can muster is a blank stare, unwilling to tap into the root of that hidden anger.

The inclusion of the Munkey King is just one surprise this webseries has to offer. Even though it’s only six episodes, with each episode only lasting about five minutes, Munkey in the City manages to address certain tropes associated with Asian American male characters and turn them on their heads. Munkey never gets the girl in the end. But his lack of game isn’t based on Asian stereotyping; it’s because Munkey is so messed-up, he’s not mentally ready for any girlfriend (what’s sad is that he doesn’t even realize it). Ditto for Munkey’s dorkiness; he’s a dork because he’s been sheltered and because he’s insecure, not to mention that he’s also emotionally and mentally lost. Basically, his traits are there because of the life he’s lived and the choices he’s made, and seeing a well-rounded character who also happens to be Asian is refreshing.

If you’re wondering if revealing the Munkey King and Munkey’s lack of romance are spoilers, don’t worry; both points are well established before you ever get to the final episode. What I won’t reveal is the series’ biggest secret, and it has to do with this lady, Evet (Monica Barbaro).

Keep an eye on her.

I will say that even with a mysterious character like Evet, character moments become barbs aimed straight at old tropes. Are you sick of the “lesbian-turns-straight” trope? One scene featuring Evet will show you that Munkey in the City is tired of it, too–in fact, it uses the moment as a way to take a stab at its leading man, further showing the place of desperation Munkey is at in his life.

I found Munkey in the City to be fun and surprising. Munkey, like the fabled Monkey King in Journey to the West, is hoping to find his own nirvana at the end of a sojourn. I’m excited to know just how Munkey plans to tackle his demons as he goes along his quest to find himself.