How “Black Panther” honors the feminine through Pantone and kente cloth

We’re still hyped from the new Black Panther trailer, aren’t we? I know I am! In case you haven’t seen it yet, here you go:

Instead of writing about the trailer from the perspective everyone else has been using, I’ve been trying to think of another way to address the trailer and some of the themes present. I definitely knew I wanted to address the magical panther walkabout sequence.

Then, I saw this tweet from The Color of Cinema.

But the colors found in Black Panther also reference the color meanings in kente cloth. Black Panther is a film based on pan-African cultures, and T’Challa himself wears kente–the fabric of royalty in the Ashanti Kingdom (between 1701-1957) and the traditional fabric of the Ewe people, both of Ghana.

The different patterns of kente, along with the different colors used, all have specific meanings and are used for particular occasions, so I thought it would be cool to see how the color theories of kente cloth are also interwoven into Black Panther‘s color stories.

In part of the trailer, we see T’Challa on some type of sojourn into what has to be the land of the ancestors. There,  in a very specific Lion King callback, he meets the mysterious panthers that mean so much to his people.

Using some of next year’s Pantone colors, we can see that the blues, purples, and lavenders present speak to what’s going to resonate fashion-wise around the time the film’s released. 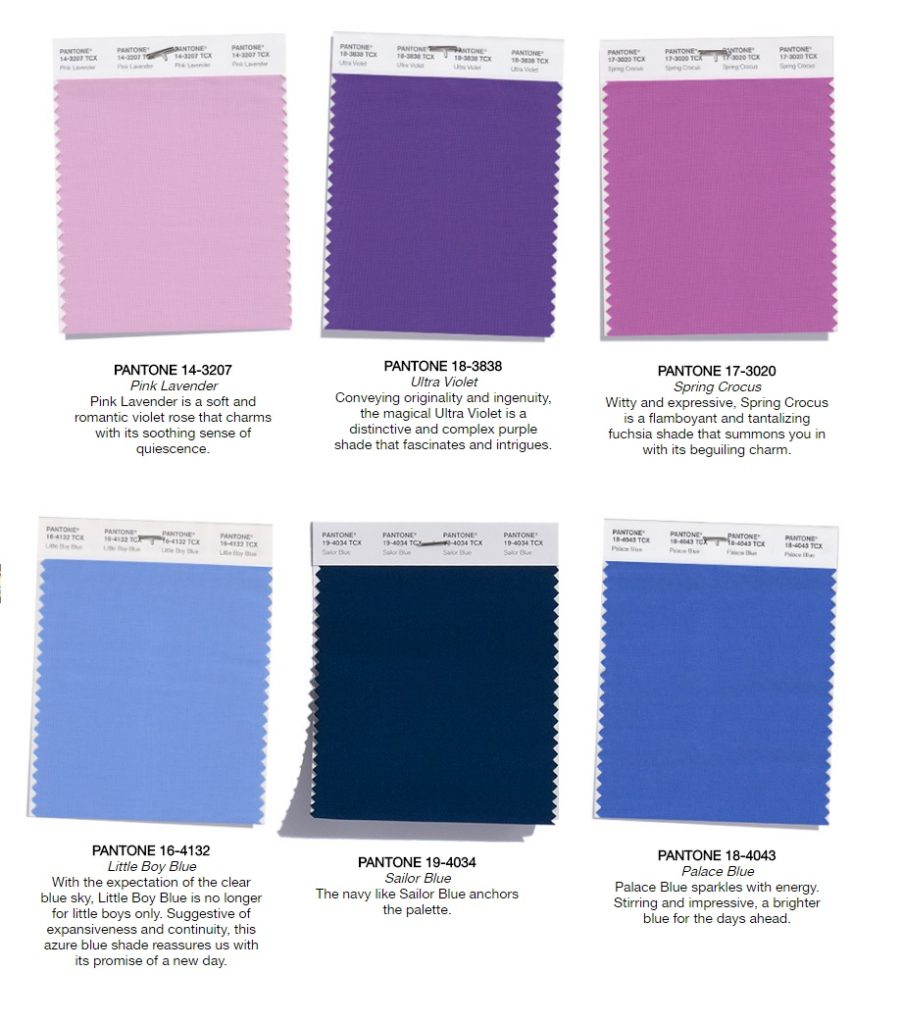 The colors are described as “soft,” “romantic,” “energy,” “expressive,” and suggestive of “brighter…days ahead” and the “promise of a new day.” That references what these colors represent in kente cloth.

Pink is associated with “the female essence of life” and purple is connected to the “feminine aspects of life.” Purple in particular is also a color that is usually worn by women. Blue represents “peacefulness, harmony and love.” These colors perfectly represent this moment in the trailer, since we see T’Challa awed by what is a very spiritual, peaceful, reverent and nurturing sight.

It’s also important to remember that the panthers in this scene must be aspects of the panther goddess Bast, one of the Ennead (in real Egyptology, nine Egyptian dieties who were worshipped at Heliopolis; in Marvel lore, a group of interdimensional beings who were worshipped by the ancient Egyptians and lived in Heliopolis, forming the basis of Egyptian culture). It’s as if T’Challa is being welcomed into a spiritual, womb-like space. Yes, I said “womb-like,” because what else would meeting the mother goddess of your people be like?

ALSO READ:  Witnessing A Revolution Unfold (And How I Hope It Continues)

The feminine is a highly important part of Wakandan society and in this film–it’s a groundbreaking move for a Marvel movie (or any movie, to be frank) to actually show how important the feminine is to the world, not to mention life itself.

It’s even more poignant that this focus on feminine power is happening a film directed by a black filmmaker and centered around African characters. This might be fodder for a separate article, but it would do Americans good to see fully understand the power of black women. As a black woman myself, this power isn’t greatly understood or valued by America, and sometimes not even by us black women–we ourselves can forget. It’s nice to see the black woman being celebrated. 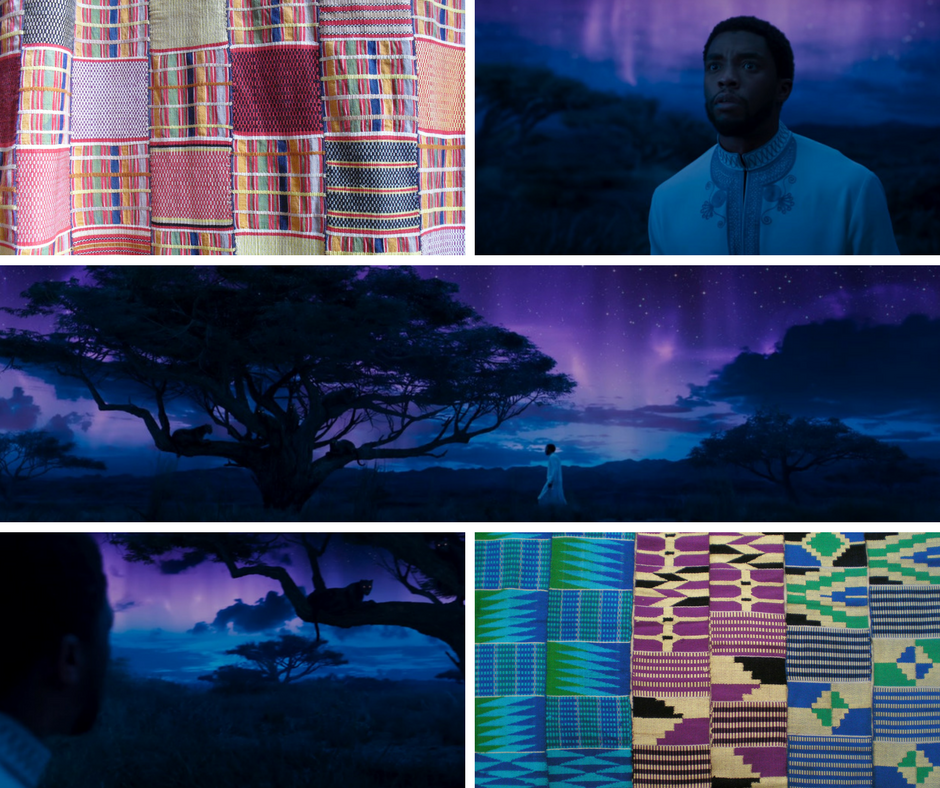 As the blood, it makes sense that they’d be wearing red. But the shades of red and gold present in their wardrobes also reflects what their jobs signify to the country. In kente cloth, red is tied to the spiritual and the political, as well as “bloodshed[,] sacrificial rites and death.” Indeed, the Dora Milaje defend their country with their lives, and will kill to keep it safe. Silver, which is worn by most of the Dora Milaje except for Okoye, can mean “serenity, purity [and] joy.” Silver is also tied to the moon, which, in many cultures, is also associated with the feminine. Gold (which is worn by Okoye) signifies “royalty, wealth, high status, glory, spiritual purity,” and yellow signifies “preciousness, royalty, wealth, fertility, beauty.” These qualities are also present in the Dora Milaje, who are chosen to be ceremonial (or potential) wives for the Black Panther and must uphold queenly qualities, even though they are also the Black Panther’s bodyguards.

T’Challa doesn’t ever call on the Dora Milaje to serve him as a harem; for him, they serve their purpose as bodyguards and trusted companions. I think that’s great, and I’m glad that wasn’t changed for the movie, because it allows the film to strengthen its thesis on the power of black women–in this case, the Dora Milaje are how the film illustrates the maternal strength of black women. While Ramonda is the Queen and mother of T’Challa and Shuri, its the Dora Milaje who are, to me, the mothers of the country. They shield T’Challa with that same type of fierce motherly protection. T’Challa’s surrounded by the maternal constantly, and it’s this force that I feel keeps him the safest, not his powers as Black Panther. The colors of the Dora Milaje are also in vogue for Spring 2018, and the descriptions of the colors also invoke the majesty of this elite group of women.

“Bold,” “confident,” “courageous,” “earthy,” and “strength” are all words that can apply to the Dora Milaje just as easily as they have been applied to these four colors.

In the trailer, we see Ramonda and Shuri dressed in white. More specifically, Shuri is dressed in all white, while Ramonda is dressed in shades of white and various creams and taupes.

White is associated with happiness; when used in kente cloth, it is associated with “purification, sanctification rites and festive occasions.” With white being a festive color, it makes sense that these two characters are wearing white when reuniting with T’Challa. 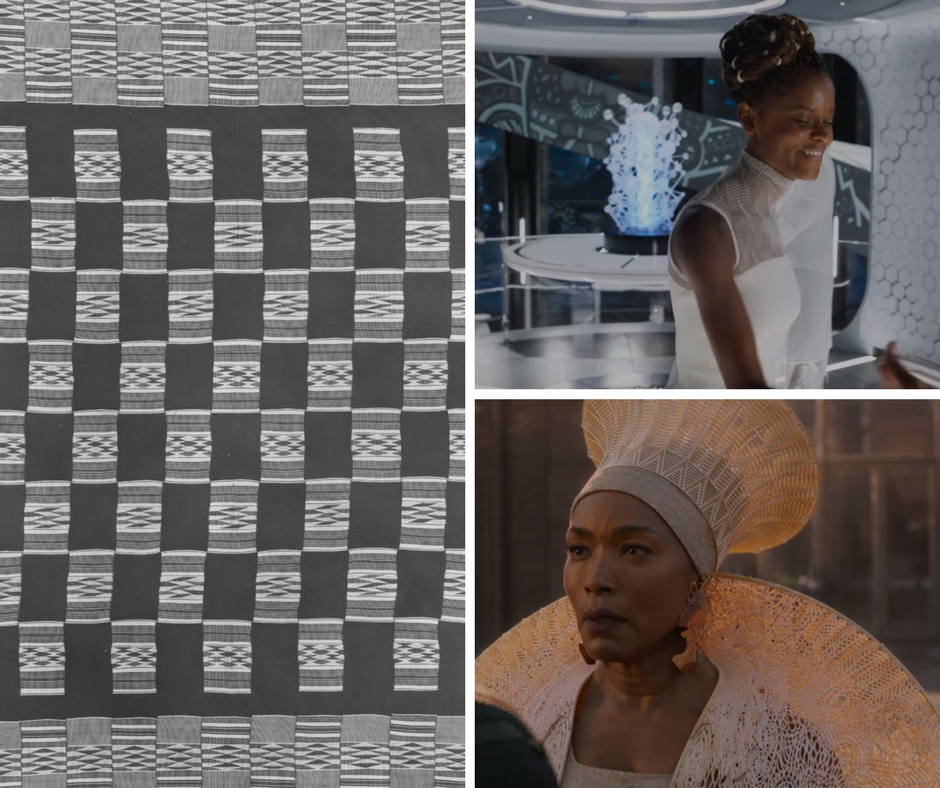 Shades of white, taupe and off-white are also big fashion colors for next spring. Pantone has described these colors as “gentle,” “delicate,” “ephemeral,” “comforting,” and “classic.” Fitting words for a color that is steeped in spiritual positivity and the festive mood. 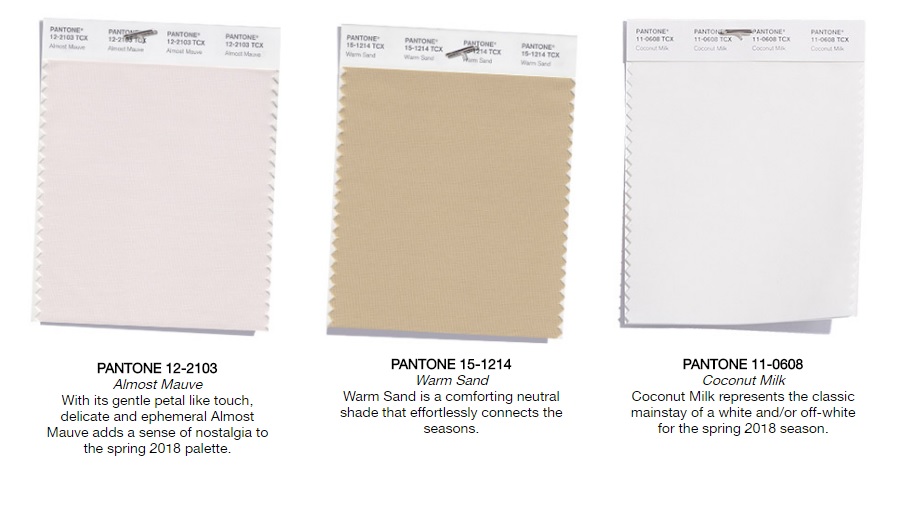 I’ve done some thinking on this. First of all, Nakia’s shades of forest green aren’t in season for next spring, so connecting them to Pantone’s seasonal predictions doesn’t make sense right now. Neither does the traditional meaning of green when used in kente cloth. Green is supposed to be associated with “vegetation, planting, harvesting, growth [and] spiritual renewal,” and that would make sense if, in the comic book lore, Nakia was a spiritually fertile character. However, in the comics, Nakia turns into a villain due to her obsession over becoming T’Challa’s wife (in the comics, he already had a fiancée, American-born Monica Lynne). So that doesn’t make sense either.

The only thing that makes sense to me is that Nakia’s character must have been rewritten for the film. With so much going for the film in the way of strong, well-rounded women, a character who’s defining characteristic is that her life’s choices hinge on whether or not T’Challa loves her wouldn’t fit. My guess is that Nakia has been remade into T’Challa’s actual fiancée, therefore writing out Monica (at least for now). If Nakia has to go bad, I’m assuming she’s given some reason with more substance other than “T’Challa broke up with me.”

I’m on the fence if she will actually turn into a villain at some point, but seeing how Marvel likes to telegraph their bad guys and gals in green (as ComicVine points out), it seems like there’s a strong possibility Nakia could go rogue and turn into her villain alter ego, Malice.

What do you think about Black Panther‘s color narrative? Give your opinions below!

(*All images except for kente cloth images are screencaps from Black Panther trailer. All kente cloth color meanings are from Wikipedia.)