About Kevin Spacey (and the others)…

I’ve about had it with Hollywood. Between Austin’s film scene with Ain’t It Cool News’ Harry Knowles and Birth.Movies.Death’s Devin Faraci, Harvey Weinstein, and the various other sexual assault/harassment allegations that have surfaced from all corners of society, it’s clear that the problem connecting all of these is that Hollywood and other industries offer umbrellas of protection to those who have power, money, and–most often–penises. Those who are the least protected are the young (girls and boys), women in general, and those who come from marginalized and underrepresented communities, including–but not limited to–racial and cultural communities, the disabled, and those from the LGBT community.

Most of the cases we’ve heard about involve women facing lecherous, predatory men, such as the 80+ women who have come out to tell their stories involving Weinstein–including Rose McGowan and Annabella Sciorra, who say Weinstein raped them–and the 300+ women who say director James Toback sexually abused them. But there are also those cases involving men, such as Terry Crews, and minors. We’ve heard it from Corey Haim and Corey Feldman. We’ve heard it from those who have accused Bryan Singer. And now we’re hearing it from Broadway actor and Star Trek: Discovery star Anthony Rapp, who was preyed upon by Kevin Spacey when Rapp was 14 years old.

Rapp’s account–which you can read in full at Buzzfeed–is horrifying.

Actor Anthony Rapp tells @BuzzFeedNews Kevin Spacey made a move on him when Rapp was 14: https://t.co/py2lILpVh5 pic.twitter.com/Yp0iilSzKm

Rapp having to relive a memory he hadn’t told anyone about since it happened was made even more traumatic by the type of statement Spacey released as an “apology.”

There’s so much wrong with this statement–and folks are right to compare it to the equally obtuse and rambling statement Weinstein put out at the beginning of his saga, via The New York Times: 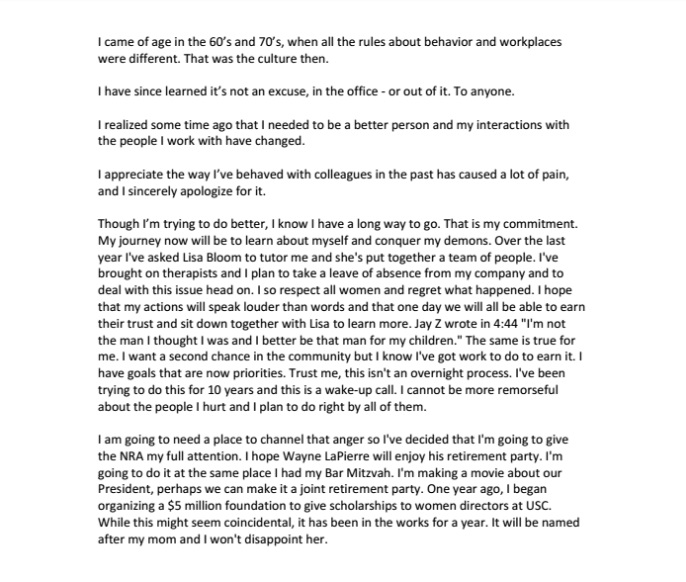 Both statements are exercises in trying to shift blame to anything and anyone other than themselves. For Weinstein, his scapegoats were the times he grew up in and his demons–which he does have, most definitely, however from actresses’ statements, he seemed untroubled by his demons until he had to issue an apology. For Spacey, his scapegoat is…being gay. Spacey certainly has his demons too, but they have nothing to do with his sexual orientation. They, like Weinstein’s, have everything to do with falling in lust with absolute control and absolute power.

To equate being gay to molestation is a two-fold act of cowardice and violence. First, the conflation is a slap in the face to the LGBT community, a community he has apparently run from his entire acting career, despite decades of rumors and direct questions about his sexual orientation. Secondly, it sets America’s progress with LGBT rights and attitudes back to the stone age. LGBT Americans have had to live with these types of regressive stereotypes for much longer than we straights have been aware of them. In fact, it’s straight America that has perpetuated these myths within our society. Again, the demon at work is absolute control and absolute power, and those who are in the majority have the power to control the narrative however they want. In this case, it’s straight people passing along the stereotype that those who are gay or otherwise along the spectrum are pedophiles and predators.

For Spacey to, as many have said, hide behind the rainbow flag now after he’s ran from it for so long is ugly and morally lacking. He should be ashamed of himself.

Speaking for those of us who review TV and film for a living, there’s the added moral condition of how to approach Spacey’s body of work after this bombshell.

I’ve followed the Weinstein saga closely, and provided my point of view to Bustle on how women in in the film criticism industry could come to terms with approaching Weinstein-backed films now that the facts are out in the open. One part of my opinion that got edited out (since most of us in the article were on the same wavelength and repeating each other), was that if it were a case of avoiding one actor and his filmography, say Woody Allen, then it’d be easy to avoid and remove our support from that actor. That’s what I’m going to do when it comes to Kevin Spacey. Just like with Weinstein, where there’s one story of wrongdoing, there’s bound to be more (whether or not they come forward).

It seems like Netflix is taking this avoidance approach with Spacey as well; the streaming network has announced that it will end House of Cards after the sixth season, which is currently in production. Netflix and Media Rights Captial’s joint statement (via The Hollywood Reporter)

“Media Rights Capital and Netflix are deeply troubled by last night’s news concerning Kevin Spacey. In response to last night’s revelations, executives from both of our companies arrived in Baltimore this afternoon to meet with our cast and crew to ensure that they continue to feel safe and supported. As previously scheduled, Kevin Spacey is not working on set at this time.”

Various celebrities, particularly those who are gay, also spoke out against Spacey’s conflating statement, as well as Beau Willimon, the creator of House of Cards.

My statement regarding Anthony Rapp and Kevin Spacey: pic.twitter.com/8z6zotHWE5

.@GeorgeTakei sent over this statement on Kevin Spacey and Anthony Rapp: pic.twitter.com/vNY2m6NjRq

*Sexual abuse by opposite and same sex predators. https://t.co/EhRkhdtlcG

No no no no no! You do not get to “choose” to hide under the rainbow! Kick rocks! https://t.co/xJDGAxDjxz

Being gay should never be equated with sexual assault or pedophilia. Thanks for giving the homophobes more ammo #KevinSpacey. 🙄

Thankfully, the tide of voices has helped keep the narrative on Rapp’s story and not on the spin Spacey and his team were trying to pull (which, on some outlets, they succeeded). The focus should always be on the side of the victim and not on the perpetrator, who is still only out to control and use power, even when his (or her) back is up against the wall. If Hollywood could come to terms with its demons and finally rid the industry of predators, it’d be a much more enjoyable industry for actors and crew, film and TV critics, and the audience at large.

ALSO READ:  Julian Reviews: 'Mortal Kombat' Is Fun, But Not For Everyone

With that said, the best way to end this is with Rapp’s words on why he decided to come forward.

I came forward with my story, standing on the shoulders of the many courageous women and men who have been speaking out 1/3

to shine a light and hopefully make a difference, as they have done for me. 2/3

Everything I wanted to say about my experience is in that article, and I have no further comment about it at this time.