Happy Black Panther weekend, everyone! Marvel’s biggest film ever has touched the lives of many of its fans and has inspired many others to view themselves beyond the stereotypical paradigm. Thursday’s early screenings alone have shaken up the movie premiere experience forever thanks to a focus on fashion and activism.

Even though the official premiere of Black Panther is Friday, theaters began showing the film around 7 p.m. local time across the country, and fans everywhere came out dressed in their African finery. Black Girl Nerds started the fashion conversation by creating the hashtag #WakandaCameToSlay, encouraging folks to post their pictures on Twitter.

When you head out to see @theblackpanther, snap a picture of your outfit and use the hashtag #WakandaCameToSlay! #BlackPanther #WakandaForever pic.twitter.com/9Qq1mHwJq4

Fans certainly didn’t disappoint. Here are just a few pictures from the hashtag, which is still going strong.

Just a few more hours! I love my job but can't wait for work to end! #blackpanther #WakandaCameToSlay #WakandaForever pic.twitter.com/gwUUdSPpQ3

Waiting to go into the cinema for #BlackPanther wearing my homage to the #DoraMilaje #WakandaForever #WakandaCameToSlay pic.twitter.com/PVpf68OYLq

Y’all! Heading out for my 2nd trip to Wakanda. #WakandaCameToSlay #blackpanther 🙅🏾‍♂️✊🏾 pic.twitter.com/o2zyxNpSZg

On my way to see #BlackPanther at the #CrownWakanda event. Look, I tried my best with my Gele. #WakandaCameToSlay pic.twitter.com/xhDu7mjqXd

You can see more pictures at The Hollywood Reporter.

Not only are fans breaking out their finest duds to see the film in royal style, but fans are also taking political action by registering to vote. Blavity scored an exclusive interview with Kayla Reed, Jessica Byrd, Rukia Lumumba, founders of the Electoral Justice Project (EJP), a project by the Movement for Black Lives. They’ve created an initiative called #WakandaTheVote, which uses Black Panther as a launching pad to create a stronger Black voting base.

ALSO READ:  12 Simple Ways To Stand Up Against COVID-19 Racism 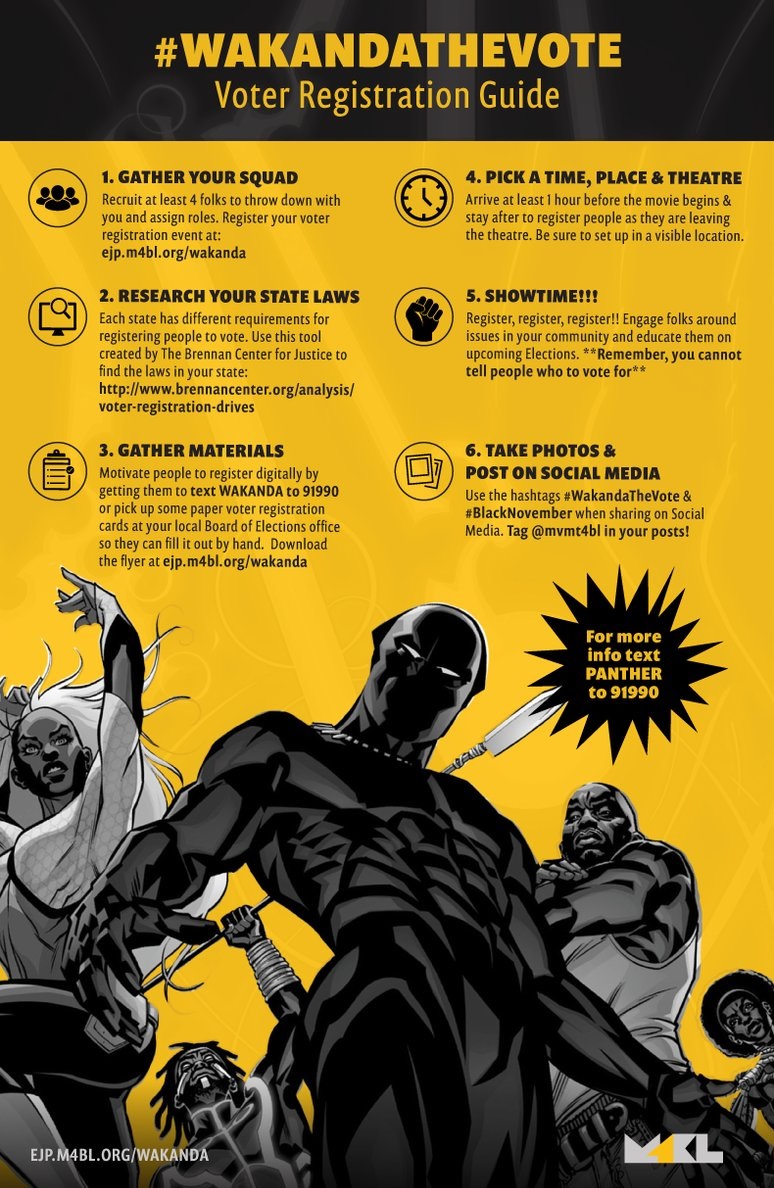 “This weekend we wanted to meet our people in Wakanda,” Reed and Byrd said to Blavity. “We know that for some it’s a superhero world, but we know that the world we deserve is still waiting to be built — and we want to build it! This upcoming spring and November 2018 midterm elections are an important step in building that new world, and we want to take every opportunity to engage our communities in the conversation of electoral justice. We will be registering people to vote at movie theaters across the country so that we can #wakandathevote at the ballot box.”

If there’s a group at your local theater asking you to #WakandatheVote, you’d better heed the call and register! T’Challa’s counting on you.