Doug is one of those shows that is like a litmus test for how you viewed cartoons as a kid. If you viewed characters who were different colors as avatars for racially-coded people because of the limited times you saw characters like yourself on TV, then perhaps Doug provided tons of fodder for your mind to process. One of the main characters who are often discussed and argued about is Skeeter Valentine, Doug’s best friend.

I grew up thinking Skeeter was obviously black. Why? Because usually anyone that was presented as green, blue, or some other strange color on TV, it was code for “other,” and in the ’90s (especially in my black household), you typically took that to mean they’ve got to be black.

Other anecdotal things that clued folks into believing Skeeter was an undercover black kid: Skeeter’s constant beat-boxing or otherwise making some of noise reminiscent of Police Academy star Michael Winslow. 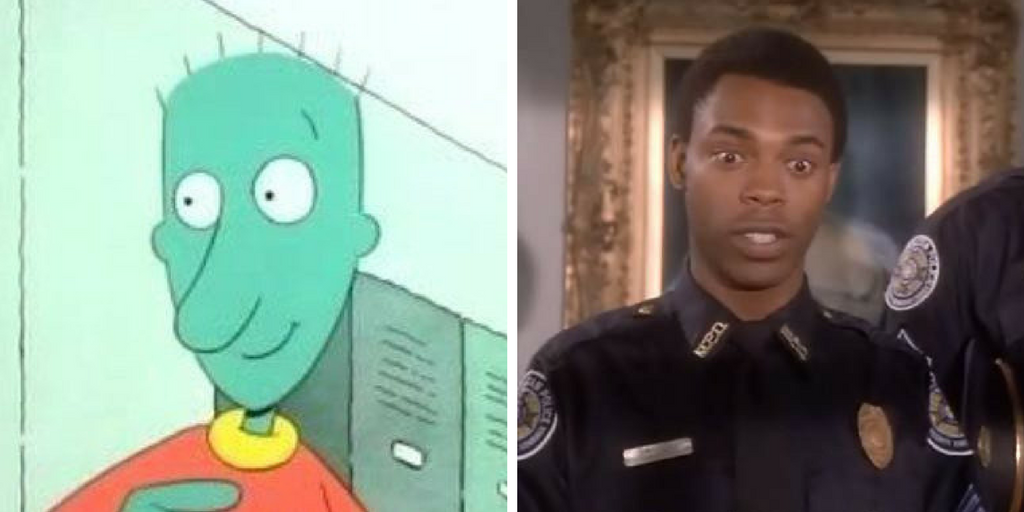 Also, he could dance. Check out this video from YouTube, in which Skeeter is trying to teach Doug how to do a more cartoonish version of break-dancing, only to get himself tangled up in his limbs.

He was constantly doing other stuff one might consider “urban,” if your forgive that awful word describing black stuff. One example: being the resident turntables dude.

And then there’s just the intangible quality that Skeeter has. Of course, anyone can be about the turntables life and know how to dance, etc. But regardless of being teal, Skeeter just doesn’t read as culturally “white.” He reads as more conventionally black.

“It’s pretty common knowledge that Skeeter was African-American,” he said. “And I love that, because I did not consciously set out for that to be the case; I just thought he looked good blue.”

“Look, we’re not black people, we’re not Mexican, but we want the cartoon to speak to all groups,” he said. “How do we get past the barrier or ethnicity? And Jim said, ‘Let’s try coloring them all different colors.'”

ALSO READ:  NAACP Reacts To Sidney Poitier's Death: "His Life Serves As A Testament To Enduring Will And Perseverance"

However, Doug’s conventionally white. So…what’s the deal there? I could make an entire post on just that element of the coloring issue alone. Until I get around to tackling it, Jezebel has a good article on it that I suggest you to read if you’re truly interested in how odd the racial optics of Doug actually are.

But I’m not saying this in hate–I love Doug, and I love Skeeter. In fact, Skeeter, Judy, and Roger are my favorite characters from the show. They’re just solidly-made characters. And the hilarious part of all of this is that Skeeter’s voice actor, Fred Newman, is a white guy. So that just goes to show how many twists and turns there can be when a character is racially coded, despite every intention to not create a racially-coded character.