WICOMICON is ‘saving the day’ in the midst of convention chaos

It’s been a wild four days to say the least. Universal Fan Con, a convention that was reported to be held at the Baltimore Convention Center, was something many fans from marginalized communities were looking forward to. Instead, it suddenly imploded last Friday afternoon. Well, for us outside of the inner circle, it ‘imploded.” From the investigative work from journalists, irate backers and ticketholders have done plus statements put out by those at the center of the fray, it’s clear the convention was dead on arrival for months.

I’m not going to rehash the timeline of events; you can turn to Nerdophiles, who has done great work in keeping everything organized and up to date. Instead, though, I wanted to highlight a convention that has come together in 48 hours in the hopes of giving fans the sense of community they were hoping to experience in Baltimore.

Nerds of Color, Black Heroes Matter, New Release Wednesday and theblerdgirl along with André Robinson of Carbon-Fibre Media and Elijah Kelley of the Be A Boss App have banded together to create WICOMICON 2018, a pop-up, one-day convention taking place April 28 at the Wicomico Building (1100 Wicomico Street) 10 am to 7 pm. The event will feature tons of creators, cosplayers, artists, music, and much more. To paraphrase the tagline for the event, WICOMICON is definitely “saving the day.”

The name “Wicomico” is derived from the Algonquin words meaning “a place where homes are built.” Housed in a historic building at 1100 Wicomico Street in Baltimore, Maryland, WICOMICON 2018 will be a home for fans and artists left homeless due to the unexpected postponement of Universal FanCon.

Featuring some of the most acclaimed names in the comic book, arts, and entertainment industries, WICOMICON 2018 will open its doors starting at 10:00 am on Saturday, April 28 and run until 7:00 pm. In addition to dozens of exhibitors, this unique pop-up convention will also feature panels, cosplay contests, surprise guests, and a wide variety of food options. Admission at the door will be only $10 for everyone ($5 for FanCon ticket holders) and free for children under 12 years old.

“We knew there were a lot of people in and out of Baltimore hurting when FanCon was postponed, and we wanted to provide some relief,” said Keith Chow, founder of Hard NOC Media and The Nerds of Color. “Fortunately, we were able to come together as a community and find a place to celebrate the things we love in the city we love.”

“If we are to say that we are a community, then we must truly operate as a community. That means picking each other up when we stumble and fall, and elevating each other to the best of our abilities,” said Uraeus, creator of Black Heroes Matter. “We saw a problem that needed solving, and mobilized our collective resources and skills to solve it.”

“WICOMICON is what the geek community needs right now,” said Karama Horne, a.k.a theblerdgurl. “It’s going to allow us to uplift artists, fans, and the city of Baltimore.”

“My organizing partners have risen to the occasion and like Peter Parker: ‘with great power comes great responsibility,’” said Patrick Michael Strange, host of The New Release Wednesday Show. “So, like pop culture and the comics that we are fond of, it is in times of tragedy and adversity that real heroes emerge and people come together. This is that time.”

“I am so pleased to be working with some of the brightest minds in the region on an event that celebrates the best of us when things can look their worst,” said André Robinson, executive producer of Carbon-Fibre Media who also serves as executive director of Innovation Villages:

Baltimore. “My partners and I welcome the opportunity to showcase how together we rise when facing adversity.”

Said Be A Boss CEO Elijah Kelley: “You don’t have to be a success to become a success.” 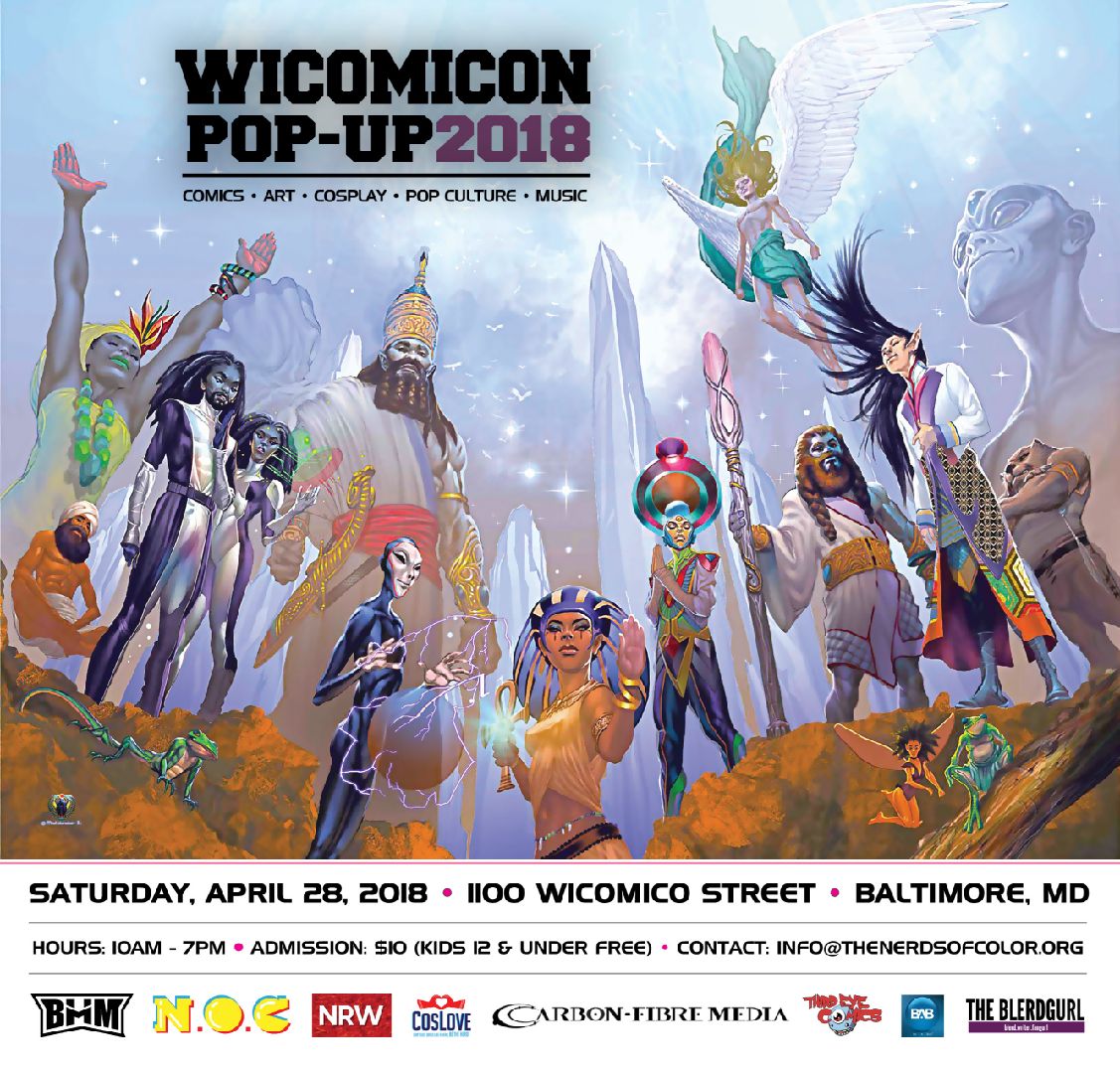 In short, WICOMICON is a godsend to FanCon attendees who now have nowhere to go (and no ability to get a refund on their tickets). It’s helping out vendors who have already spent hard-earned money on product and shipping. It’s helping fans come together, regroup after a tremendous loss, and have some fun. It’s been truly heartening to see the community work together in a time of fandom crisis.

For more information about WICOMICON, visit hardnocmedia.com/popup for more information, or contact the organizers with your specific questions about press coverage, cosplaying and entertainment, volunteering, programming inquiries and panels, etc.:

ABOUT THE NERDS OF COLOR

Since its inception in 2013, The Nerds of Color has served as an online hub, reaching over 1.7 million unique visitors. The website has been featured in The New York Times and NBC News and continues to be a leading voice in advocating for diverse and inclusive popular culture.

ALSO READ:  How to Make Black Lives Matter During COVID

Black Heroes Matter is a Baltimore-based “social justice brand” founded by designer, URAEUS in 2016, dedicated to championing diversity in pop culture through the creation of dynamic content/conscious gear, and the promotion of heroes of color.

The Strange World Presents… The New Release Wednesday Show! Filmed LIVE at Strange Manor, Painted Visions Comics, Cards and Games, and at The Amazing Comic Shop! Get the breakdown on all things pop culture and the top comics coming in that you should be picking up at your friendly local neighborhood comics shop!

Karama Horne is a Contributing Editor, producer, writer and host for SYFY Wire. She’s a regular on the SYFY Wire Blast TV segments and the podcast Who Won the Week and provides commentary, reviews and interviews on her popular website theblerdgurl.com. She also has been featured on panels and stages at New York Comic Con, Awesome Con, Emerald City Comic Con, C2E2 and The Schomburg Black Comic Book Festival. Karama also actively gives presentations on diversity and inclusion of people of color and women within comics and geek culture genre. In addition, she has over 15 years experience in production, post production and project management.

ABOUT BE A BOSS

Be A Boss® is an App that connects people. By creating a network of both service Providers, and Callers (people who need or desire a service) the App makes it easy for each individual to be their own Boss. Callers enjoy the ability to command executive style services, while Providers command their business, control their own schedule, and demonstrate that The Willing Are Many®.

Carbon-Fibre Media approaches the creation of original content with a vision focused on advancing the art of sequential storytelling. Our mission is to offer creative properties that push the envelope of standard media fare into an artistically dangerous realm with controversial and unusually thought-provoking content.