I’ve said many times on my site that I am a citizen of Birmingham, AL, and as a daughter of the south, I know that the region is often stereotyped–and a lot of the time, it’s with good reason, since the south’s past is still something that haunts and reverberates in actions today. However, the south is a vastly changing region. While it’s got tons of issues to still work out, it’s lightyears from what it used to be 50 years ago. No, it’s not a utopia, but it’s also not what it used to be, and many of its citizens are well aware of the tough road ahead towards true equality.

In short, the south is putting on a new face and is showing a greater capacity to change with the times. Case in point, Georgia’s on the verge of possibly electing their first black female governor, Stacey Abrams. Abrams, a Democrat, is seen as a candidate who would not just make history, but change America forever as the country embraces a potential wave of Democratic female and/or minority elected officials this November. TIME Magazine has interviewed Abrams as well as provide comprehensive coverage about a region often misunderstood and constantly changing in their special, The South Issue.

Check out the official release below. TIME’s The South Issue is now on sale. 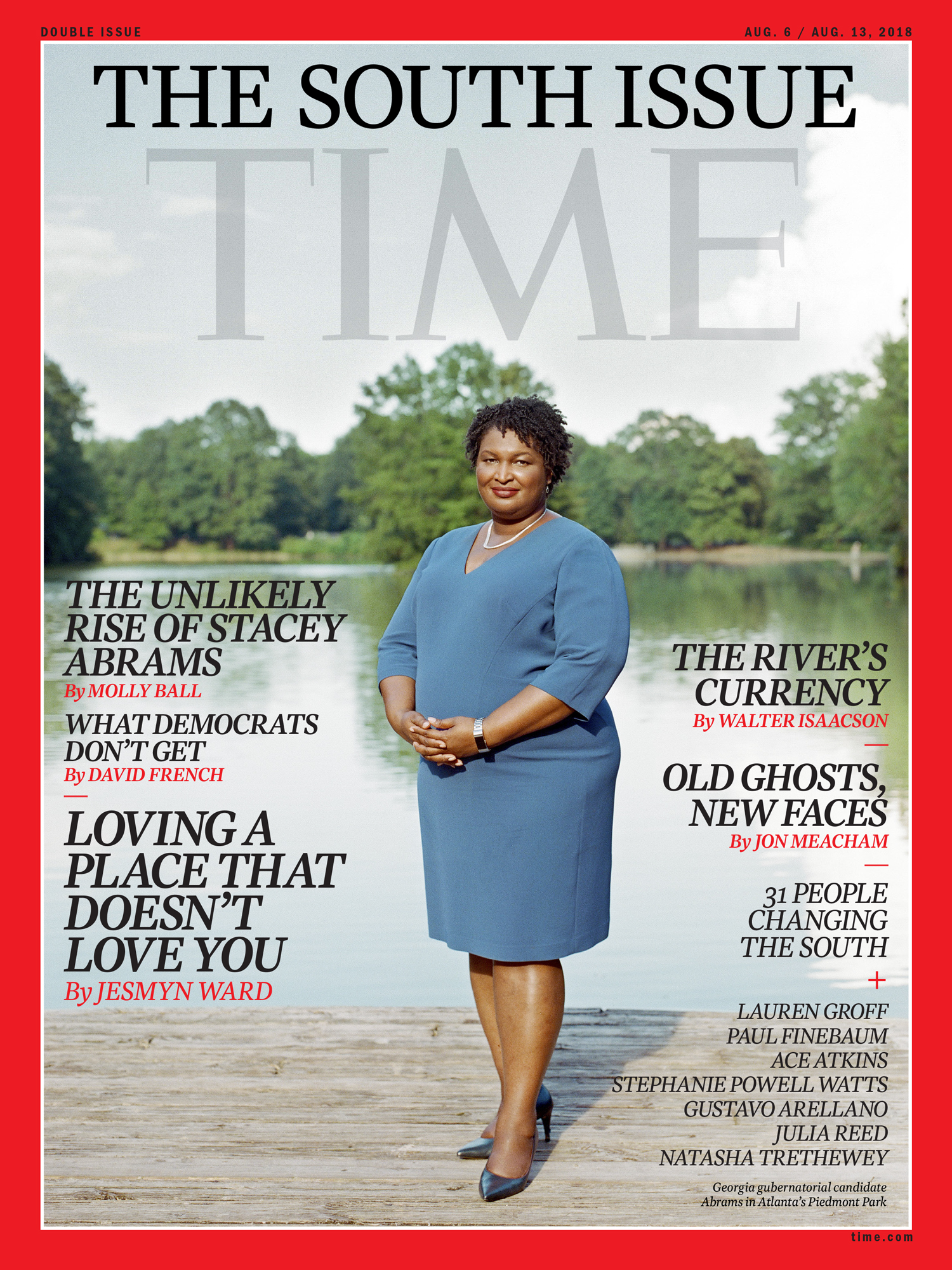 In his letter to readers, TIME editor in chief Edward Felsenthal writes, “Long after slavery’s end, even as it became clear that the national shame of racial injustice was hardly unique to the region, the study of the ever-shifting Mind of the South has turned into an obsession—and a profession—for some. TIME devoted two prior issues to it, one in 1964, as the Civil Rights Act became law, and another in 1976 as Jimmy Carter hurtled toward the White House, the first President elected from the Deep South since the Civil War. But the debate over the New South has always been something of a straw man.”

Felsenthal continues, “The region is more layered, more diverse in culture and thought, than the stereotypes and much of the literature would have it…. Yet there are certain enduring regional traits…. The South is a place of more diversity and forward motion than many assume, a reality reflected in the stories of the extraordinary group of contributors to this issue, all of whom have intimate connections to the region… It’s the complicated story of the South, one that, as the fearless Mississippi novelist Jesmyn Ward puts it in the opening pages of this issue’s special section, ‘demands nuance, introspection and ruthless clarity.’” https://ti.me/2OkBDLJ

TIME’s list of 31 Leaders that are Changing the South: From education crusaders to culinary innovators to evangelical activists, meet the 31 people who are reshaping the South.https://ti.me/2uQEtQL

On returning to Mississippi, Jesmyn Ward, two-time winner of the National Book Award for fiction: “When people asked me why I returned home to Mississippi­ after years of living in the West, the East and the Midwest, I simply say this: I moved home because I love the beauty of the place, and I love the people…. It is difficult for them to understand why a successful black woman would choose to return to the South and, worse yet, to Mississippi, which looms large in the public’s imagination for its racist depredations, and rightfully so…. Even as the South remains troubled by its past, there are people here who are fighting so it can find its way to a healthier future, never forgetting the lessons of its long, brutal history, ever present, ever instructive.” https://ti.me/2mHd9jo

On the changing South, Pulitzer Prize winning author Jon Meacham writes: “More than a century and a half after Appomattox and more than 50 years after Selma, the South is in flux, its complexities and ambiguities deepening as the region offers a pronounced reflection of the rest of the nation….The task at hand is determining whether the flow of new people into the South will accelerate changes in patterns of work, politics and culture…. In some cases, the new blood and new jobs have turned large pockets of deep-red states at least a shade of purple…. Southern politics are far more fluid than many people believe, and even the slightest uptick in Democratic strength in the South could portend far greater gains elsewhere…. If the South can come to grips with its tragic past—if more people, say, visit Bryan Stevenson’s new lynching memorial in Alabama than acquire MAGA hats—then the region has an opportunity to advance redemption in a country torn asunder by tribalism…. At which point a newly enlightened South may rise again—as a force not for ill but for good.” https://ti.me/2JWH688

On how the Mississippi River remains the South’s most vital artery, Walter Isaacson, professor of history at Tulane University and best-selling biographer: “Now that I have moved back to New Orleans, I have become less mesmerized by the romance of the [Mississippi River] and more respectful of its gritty reality and the economy it supports…. We devote a lot of energy, especially in places like New Orleans, thinking of ways to increase tourism. That’s fine. But we also need to focus on nurturing and improving our port. Like other ports, it suffers from our national inattention to critical infrastructure.” https://ti.me/2LNdMTn

TIME’s Molly Ball on the Odds of Georgia Democrat Stacey Abrams Governing a Red State: “The Implications Would Be Profound, Not Just for Georgia But for the Rest of the South and Potentially the Nation”

“In a Democratic Party divided and desperate for fresh faces, Abrams is already becoming a national star…. Whether she can win is another question. Georgia has grown purpler as its demographics shift, and November could bring a national Democratic wave driven by women and people of color…. In a red state that hasn’t elected a Democratic governor in two decades, Abrams remains an underdog…. On the other hand, if she can pull it off, the implications would be profound, not just for Georgia but for the rest of the South and potentially the nation…. Democrats have tried to win in Republican territory by appealing to white centrist voters…. Abrams’ campaign is built on the proposition that a compelling candidate can get elected in the South with a progressive message that attracts liberal whites and minorities to the polls in greater numbers. If she’s right, Abrams could show the wilderness-wandering Democrats a new way.”

On the skills she sees in Abrams, Valerie Jarrett, former top adviser to Barack Obama, tells TIME, “I know talent when I see it. I see somebody who campaigns authentically, has character and integrity, is resilient and graceful, and who is able to take the long view and ignore a lot of noise.”

On how the biggest obstacle her campaign face is getting people to believe victory is possible, Stacey Abrams tells TIME, “My campaign argues that Georgia is different now, but it’s hard for people to believe that change happens. It’s human nature – you don’t notice change when it’s gradual. The change in Georgia has been gradual but meaningful. My campaign seeks to harness it, but I’m asking people to not believe their eyes, not believe their memories.” https://ti.me/2v4fHMj

+ Inside the new hub of America’s entertainment industry in Georgia: “While Hollywood remains the heart of the film industry, Georgia has staked a claim as its Southern campus.” http://time.com/longform/hollywood-in-georgia/

+ Gustavo Arellano on the culinary food landscape of the New South: “Immigrants and their American-born sons and daughters have helped transform the perception of Southern cuisine into something beyond biscuits and gravy and mint juleps.” https://ti.me/2JWofdB

+ Essays on the South: Nathaniel Rich on the bayou, Paul Finebaum on the SEC, Stephanie Powell Watts on race days, Lauren Groff on the prairie, Julia Reed on Doe’s Eat Place, Ace Atkins on Elvis, David Joy on hunting, and Silas House on Appalachia. https://ti.me/2LFPvla