There Is No Time For Doomsday. Promise To Speak Life Instead.

If there’s one thing I’ve thought a lot about, it’s how to be a fighter for social justice while being a “perfect” person. In other words, how does one become the perfect symbol of resistance without having a few issues you have to fix within yourself?

This thought came to a head this week, as I thought it an opportune moment to admit that even though I have a website dedicated to representation in entertainment, I too have some work to do.

In a small Twitter thread, I wrote about how I realized that I still harbored some fear-based ableism around blindness. As a small child, I was scared stiff of going blind because of my own near-sightedness. An elementary school nurse had scared me into wearing my glasses, and after school, I thought, “What if I don’t wear my glasses and go blind?” I was afraid of the dark, which I equated with blindness. And what took root was a fear of blindness I never truly resolved, despite my conscious knowledge of ableism and how it’s not right.

Something that’s always taught me about life, for better or worse, is entertainment, and it took something like Rogue One to make me confront that neglected part of myself.

Sometimes I write fanfiction to practice “writing for real.” Have I published anything outside of what I publish on this blog? Nope. But I write fanfiction just the same. This time, I was trying my hand at a Chirrut Imwe/Baze Malbus Rogue One modern day alternate universe story (Why alternate universe? Because I’m not the biggest Star Wars fan and I don’t feel like looking things up every five minutes.) The thing I didn’t know how to depict was blindness. So I decided I needed to do some research. Of course, I’d never be able to accurately portray blindness, since I didn’t live it, but I wanted to write something beyond the standard “he saw darkness” line.

What I learned was, in short, that what I thought I knew about blindness was not at all right. Darkness is not all that blind people see. It’s a much more layered experience than that, and it varies depending on the person and their type of blindness. But a development that is just as important is that I had come face-to-face with my own ableism, and I was fairly annoyed at myself. Since I’m a semi-public figure, I thought this was a good teaching moment to share.

However, after posting about it, I soon started having dread. What if everyone who followed me began to hate me because I admitted to a fault I needed to correct? What if I started being seen as the dreaded “P” word—problematic?

I didn’t want to be problematic. Not only would I become an internet pariah, but any chance at a lucrative blogging career would be gone. (Or at least, the chance the blogging career I’d like to have.)

The term “problematic” is something I’ve always disliked, simply because it’s often used as a way to block others from sitting at the proverbial “Cool Kids Table.” It’s a way to create an in crowd, a bureaucracy of sorts, and if you’re not in the in crowd, then you’re a nobody. I haven’t liked how in many cases, online “wokeness” involves someone elevating themselves to a loftier position and never revealing when they themselves have been “problematic.” To admit that would be faced with being kicked out of the Cool Kids group.

The term “problematic” is also associated solely with clearly racist or discriminatory people. It’s easy to call them problematic, but what about everyday problematic things, like casual misogyny, or like my personal example of being afraid of blindness? Aren’t well-meaning folks and folks who do their part to advance society in a positive direction also capable of being problematic? Of course.

The fact is that we are all “problematic” on some level. We have all said or done something that we are not proud of. We have all marginalized someone, even if that someone is just ourselves. We all have something to work on. For me, some of that work includes snuffing out some remaining ableism as I continue on the quest to become a more inclusive person in both thought and action. While we all strive to be at the Cool Kids Table, we’ll definitely all have a seat at the Problematic Table. If you’re alive and making mistakes, there’ll be no way you can escape that hot seat, so we might as well become at peace with that fact. I know I have to come to terms with that, regardless of how right I try to be.

But just because we disappoint ourselves sometimes doesn’t mean we’re intrinsically problematic, though. All it means is that we are human, and as humans, we are going to fail. But what’s truly problematic is if we don’t learn from our mistakes and strive to do better in the future. If you can learn and work on becoming more aware of your own biases, then that’s the road towards socially-conscious success. I’m taking my own advice, especially since I’m on the visually-impaired spectrum myself. If anyone should have more sensitivity about sight-based disabilities, it should be me.

I’m sharing my thoughts with you to show that yes, even those of us who fight for representation make mistakes too. I, like everyone in this fight, am an imperfect messenger. But hopefully the message I want to spread is coming through, despite my imperfection. If you want to spread the message of social justice, but are afraid of doing something that could be seen as problematic, don’t feel scared to try to fight the good fight; just embrace the fact that you will do something “problematic.” But if you can learn from it and become better for it, then you can have a seat at the Cool Kids Table, too.

Op-ed: JUST ADD COLOR in the time of Donald Trump 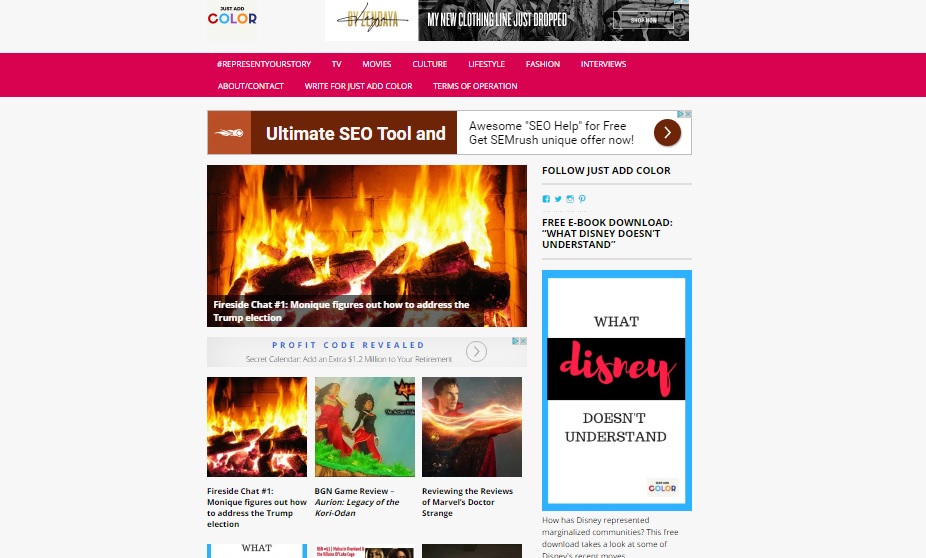 Recently, I put out a podcast airing out some of my raw thoughts about this impending Donald Trump presidency. One of the biggest issues I’ve been dealing with, aside from how everything Trump might do could basically end life as we know it (only being half-sarcastic about this) is how I was going to continue the work I’m doing here on my corner of the internet, JUST ADD COLOR.

After doing a lot of thinking, soul-searching, talking, and a little “HOW AM I GOING TO GET THROUGH THIS?!”-based crying, I decided I’ve got to do what I’ve been doing, which is talk about representation in entertainment. That’s what this site is founded upon. A lot of what happens in the entertainment sphere echoes what happens in society. In fact, I just learned that in Ava DuVernay’s The 13th states that the KKK’s penchant for cross burning only happened after D.W. Griffith’s The Birth of a Nation came out. If that’s not a direct correlation between life imitating art, then I don’t know what is. So talking about entertainment’s influence on regular life is something that is going to continue and something that has to continue.

However, we all need some levity, so please think of JUST ADD COLOR as a safe space for discussion about popular TV, movies, games, comics, etc. I’m working with a lot of POC geek outlets to utilize some of their content to help fill in the gaps I might have in my entertainment coverage (because I don’t play all of the games or read all of the comics on  daily basis). I’ll also make sure to post some more articles concerning some of the recent comics and books I’ve bought recently. And, since looking back at happier times is something we all need to do from time to time, I’ll definitely pull from happier moments in history, such as analyzing the surprising pro-black woman anthem that is Sir Mix-a-Lot’s Baby Got Back (yeah, I know, I talked about my hatred of the aught’s obssession with big butts, but Sir Mix-a-Lot takes the butt obsession from a different perspective than today’s love of butts, I think).

I’ll also preach more about unity here. In these times, we need to deal more in unity and less in division. Of course, that doesn’t mean I’ll sugarcoat any intra-race racism, for instance, calling out non black POC discrimination or fetishizing of black people, or when black people express discriminatory/fetish thoughts against other non black POC. But on the whole, I’ll focus on how we as the marginalized can and should work together to preserve our quality of life under this new regime.

This is the current plan for JUST ADD COLOR going forward. I’m hoping you can help me flesh out my plan and coverage; if you have anything you’d want covered, let me know either via Twitter, Facebook, or by emailing me at monique@colorwebmag.com