Analyzing the discourse surrounding Donald Glover’s “This Is America” 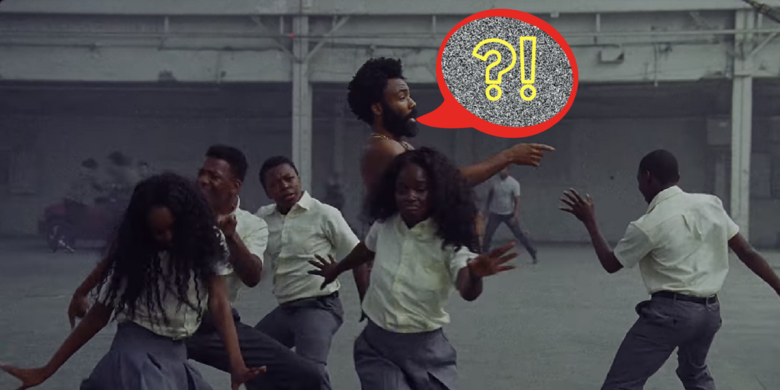 Bruno Mars and Donald Glover bring back the oldies for 2017

If there’s one good thing that might come out of 2017 is that this just might be the best year for pop culture ever, particularly music. That is, if Bruno Mars and Donald Glover’s latest offerings are anything to predict by.

First, let’s talk about Bruno Mars’ 24K Magic. The album is short, but it’s jam-packed with late ’80s and early ’90s production value. One of my favorites is “Calling All My Lovelies,” which sounds one part ridiculous ’80s funky slow-jam and one part ridiculous skewering of the sensitive male ego. (Mars’ character’s dismay at once again being on the receiving end of Halle Berry’s voicemail is hilarious.)

The other fave, “Finesse,” is pure ’90s New Jack Swing. I’d been wishing songs could go back to this sound for years, and someone finally did it! Thank goodness it was Mars, who has shown a deft understanding what made party jams of the recent past so cool.

“Mars wanted Magic to recreate the nostalgic wonder of the school dances he attended in he Ninetines–and his croweded productions, infectious attitude and soaring voice go well beyond ‘tribute’ into the realm of ‘IMAX reboot.'”

Donald Glover, aka Childish Gambino, is now taking listeners on a ride through the ’70s with his first offerings from his latest album, Awaken, My Love!, available Dec. 2. “Me and Your Mama” is great if you’re looking for some blaxploitation-esque funk, but “Redbone” really gets to the Bootsy Collins feel that I grew up listening to, thanks to my dad.

Glover also referenced memories of his childhood when talking about his new album to XXL Magazine:

“I remember listening to songs my dad would play–albums by the Isleys or Funkadelic–and not understanding the feeling I was feeling. I remember hearing a Funkadelic scream and being like, ‘Wow, that’s sexual and it’s scary.’ Not having a name for that, though; just having a feeling. That’s what made it great.”

Even Glover’s cover art evokes the same scariness and enigmatic mystery that surrounds the best of Funkadelic and Bootsy Collins’ cover art. Even though you’re repelled by the cover of Awaken, My Love!, you still want to know what’s inside the album. You want to know what has made this woman poke her head above the muck to grace us with her eerie smile.

(There’s also a reaffirming, apologetic blackness to the cover art as well, but you didn’t come here for an art treatise.)

To me, it makes sense that music would start harking back to another time and place, simply because music, as an escape, can take us back to times of our youth. With everything ranging from politics to the very state of the earth up in the air, it makes sense that millennials and Gen Xers want to go back to a time when everything seemed more stable and, frankly, a lot more fun. Right now, we all need an escape, and Mars and Glover are giving us the escape we need.

Now, if only Kid Sister would come out with another retro-’80s album, if Sharaya J would actually release her full-length album (WHEN WILL IT GET MADE?!), and if Monica, Missy Elliot, Remy Ma, and Lil Kim come out with stuff that evokes the ’90s and early ’00s, then we could really kick off 2017 on the musical good foot. For now, though, I’ll just keep Mars and Glover on and endless loop.

Who do you hope comes out of the woodwork and gives us the album we need to get through 2017? How are you liking Mars and Glover’s retro sounds? Give your opinions in the comments section below!