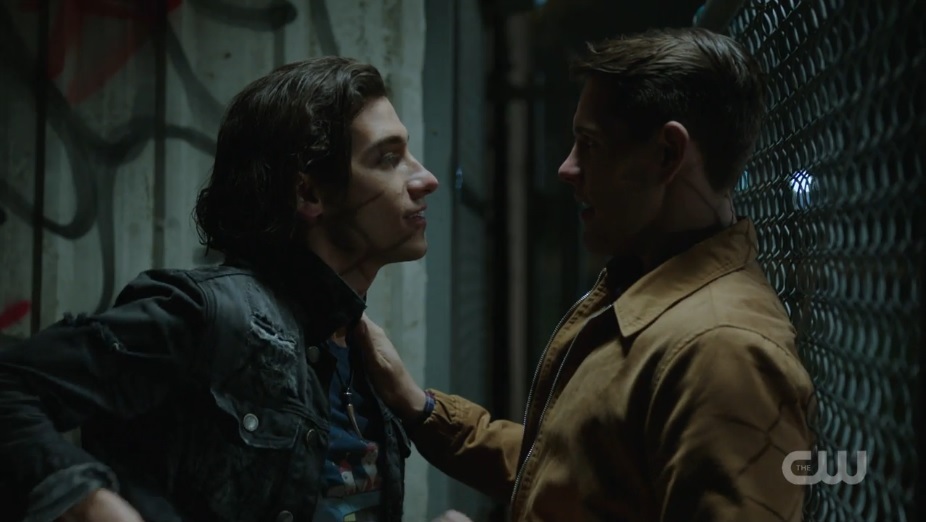 After discussing the horror that is the Ms. Grundy/Archie “romance” subplot, let’s cleanse our palettes a little and talk about a more appropriate romance. I’m talking about Kevin and his new boo, Joaquin.

I’m all about living vicariously through Kevin and Joaquin’s romance. It hits all of the classic “teen romance” buttons to a T, as well as provide some progress in the realm of TV representation. Let’s talk about them in bulleted form.

• Joaquin’s the bad boy with a heart of gold

There’s nothing that gets to teens quicker than falling in love with the guy who seems like (or actually is) the guy you shouldn’t have anything to do with. Joaquin’s that guy; not only does have the “tall, dark and handsome” thing going for him in the looks department, but he’s also a member of the Serpents, the local gang (whose leader, surprise surprise, is Jughead’s father). With Joaquin being a gang member, Kevin literally should stay far away from him. But he didn’t know that before he started snogging him, so now the danger is being treated as an added bonus to their relationship.

However, despite Joaquin’s “You’re not so strong without your beard” fakeout, it seems like Joaquin might not be such a bad dude. In quite a few ways, Kevin seems like the male Betty—he’s the classic “boy next door” type—and whether or not he has secrets to spill later on in the season, it seems like Kevin’s one of the few characters with his head on straight. If Joaquin is attracted to that, as well as to Kevin’s penchant for boldness (such as when he shushed the Serpents at the drive-in), then there’s got to be some goodness in Joaquin at the end of the day. At least I’m hoping that’s the case; I don’t want Kevin getting hurt.

• Joaquin and Kevin = Romeo and Juliet

The lovebirds from two warring factions is such an old trope, but it’s a trope that always works. The push and pull of whether the couple in question will make it is what keeps us entertained and enthralled. Usually, the couple doesn’t work out. But we always hope for the best with each new Romeo and Juliet-esque couple. Joaquin and Kevin are no different. Once we learned that that they were going to be together, the questions began to circle. How are they going to keep this relationship up? What happens when the Serpents and/or Kevin’s dad, Sheriff Keller, find out about this relationship? I hate to think about the worst possible scenarios. Let’s hope that, somehow, Joaquin is able to get out of the gang and these two are able to happily ride off into the sunset together.

• The fact that it’s treated as a normal romance

Thanks to the Shondaland-centric TGIT block on ABC, we’ve seen a lot of normalizing of same-sex relationships, which is great. I’m not completely sure as to how much of that we’ve seen on a teen-skewing network like CW, but it seems like there hasn’t been much, which is highly ironic. If the CW is all about listening to what the teens want, you’d think there would have been a show with a high-profile same-sex relationship by now. But I guess the network is skewing more towards what they think straight teen girls want to watch.

In any case, the CW is finally in the arena with Joaquin and Kevin’s relationship. Thankfully, it’s not treated any differently than any relationship Veronica, Betty, or Archie might have. Even more refreshing was how Sheriff Keller treated his son. There wasn’t any familial drama about Kevin being gay, and his dad didn’t have any stereotypical “I’m a good dad but I’m still getting used to my son being gay” qualms about himself. Seeing Kevin’s dad worry about him and tell him not to run off with any boys at the drive-in was very sweet. It’s a shame that seeing a parent act like a parent toward their gay son is such a rarity on TV, but let’s hope that we get more scenes with Kevin and his dad in the future, as well as more scenes of supportive parents on TV in general.

At the end of the day, Riverdale is nighttime soap, and what better way to up the soap factor than to have a character in a relationship with a bad boy from the wrong side of the tracks? You can’t help but love storylines like that.

What do you love about Kevin and Joaquin? Are you excited to see more of them? Give me your comments below!