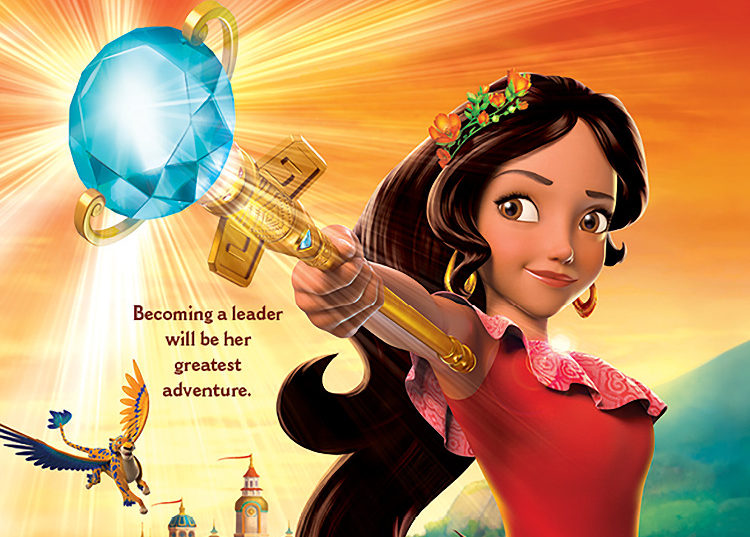 Princess Elena of Avalor will finally be presented to the world in a one-hour premiere event. Gaby Moreno, Latin Grammy Award winner for Best New Artist, will perform the theme song; Aimee Carrero, the voice of Elena, will also sing Elena’s anthem, “My Time.”

The show is set to star tons of talent, such as Switched at Birth and George Lopez star Constance Marie, movie star Danny Trejo, Jane the Virgin’s Jaime Camil and Ivonne Coll, Ugly Betty and Devious Maids star Ana Ortiz, Unbreakable Kimmy Schmidt star Tituss Burgess, movie and TV star Hector Elizondo and other guest stars. Here is a ton (and I mean a TON) of info, some of which is especially pertinent for those of you with the Disney Channel App and Disney Channel VOD.

Set in the enchanted fairytale land of Avalor, the series tells the story of Elena, a brave and adventurous teenager who has saved her kingdom from an evil sorceress and must now learn to rule as crown princess until she is old enough to be queen. Elena’s journey will lead her to understand that her new role requires thoughtfulness, resilience and compassion, the traits of all truly great leaders.

A full-length preview of the first episode, “First Day of Rule,” will be available for verified users on the Disney Channel app and Disney Channel VOD platforms beginning Friday, July 1. Following its U.S. debut, the series will roll out globally in 33 languages in 163 countries on Disney Channels worldwide.

In the first episode, Elena officially becomes crown princess and rescues her sister, Isabel, from Noblins, elf-like shapeshifting creatures based on a Chilean peuchen myth. The episode also introduces Zuzo, Elena’s spirit guide in the animal world, based on the belief of a Mayan tribe in southern Mexico. In the second episode, titled “Model Sister,” Elena is torn between a promise she made to help Isabel and fulfilling her royal duties.

This fall, Disney Channel will air a special TV movie titled “Elena and the Secret of Avalor,” which explains how Elena was imprisoned for decades in her magical amulet and eventually set free by Princess Sofia of Enchancia.

Extensions for the series include Disney Parks & Resorts, which will welcome Princess Elena at Walt Disney World Resort this summer and at Disneyland Resort in the fall; print and e-book titles from Disney Publishing; and dolls, role-play products, accessories, home décor and apparel from Disney Store and licensees including Hasbro, Jakks Pacific, Franco Manufacturing and Children’s Apparel Network. Products will begin setting later this month at Disney Store and will continue to roll out at mass retailers throughout the summer. Walt Disney Records will release Elena’s anthem titled “My Time” as a digital single on iTunes Friday, June 24, followed by a seven-track EP featuring songs from the series on Friday, July 22, and Disney Studios will release an episode compilation DVD later this year.

The recurring guest voice cast includes: Constance Marie as Doña Paloma, Magister of the Traders Guild; Lou Diamond Phillips as Victor Delgado, a debonair villain who uses his charisma to deceive the people around him; Justina Machado and Jaime Camil as siblings Carmen and Julio, who run a restaurant in Avalor; Rich Sommer as Captain Daniel Turner, Naomi’s father and harbormaster; Tyler Posey as Prince Alonso, a charming prince from the Argentine-inspired Kingdom of Cordoba; Lucas Grabeel as Jiku, the leader of the Noblins; and Echo Kellum as King Joaquín, a monarch from the Caribbean-inspired Kingdom of Cariza, who is a trusted and close friend of Elena.

The guest voice cast for season one includes: Tituss Burgess as Charoca, a magical volcano creature based on a Chilean myth; Ana Ortiz as Rafa, Mateo’s mother; Ivonne Coll as Doña Angelica, an absent-minded and overly dramatic ghost; Hector Elizondo as Fiero, a wicked wizard; Odette Annable as Señorita Marisol, Isabel’s enthusiastic young teacher; Danny Trejo as Antonio Agama, a popular Avaloran hero; Anthony Mendez as King Juan Ramón, a monarch from the Argentine-inspired Kingdom of Cordoba; Eden Espinosa as Orizaba, an evil moth fairy banished to the spirit world; Marsai Martin as Cat, a budding scientist and adventurer; Aasif Mandvi as King Raja, a monarch from the Indian-inspired Kingdom of Napurna; and George Takei as King Toshi, a monarch from the Japanese-inspired Kingdom of Satu.

Latin Grammy Award winner Gaby Moreno performs the series’ theme song and will also voice a guest role. Born in Guatemala, Moreno performs her music, which ranges from blues to jazz to soul to R&B, in both English and Spanish. In addition to winning the Latin Grammy Award for Best New Artist in 2013, Moreno was nominated for an Emmy Award for Outstanding Main Title Theme Music in 2010 for co-writing the theme song to “Parks and Recreation.”

“Elena of Avalor” was created by Emmy Award winner Craig Gerber, who also serves as executive producer. Silvia Cardenas Olivas is the story editor, and Elliot M. Bour is the supervising director. The series’ cultural advisors are Marcela Davison Avilés, founder of The Chapultepec Group, co-founder of the international Latino arts initiative Camino Arts, and Director of Humanities Programs at the FDR Foundation at Harvard University; and Diane Rodriguez, Associate Artistic Director of Centre Theatre Group and co-founder of the theatre ensemble Latins Anonymous, who was recently appointed by President Obama to be a member of the National Council on the Arts.

Check out some of the pictures of Elena and Isabel below. What do you think about Elena of Avalor? Give your opinions in the comments section below!