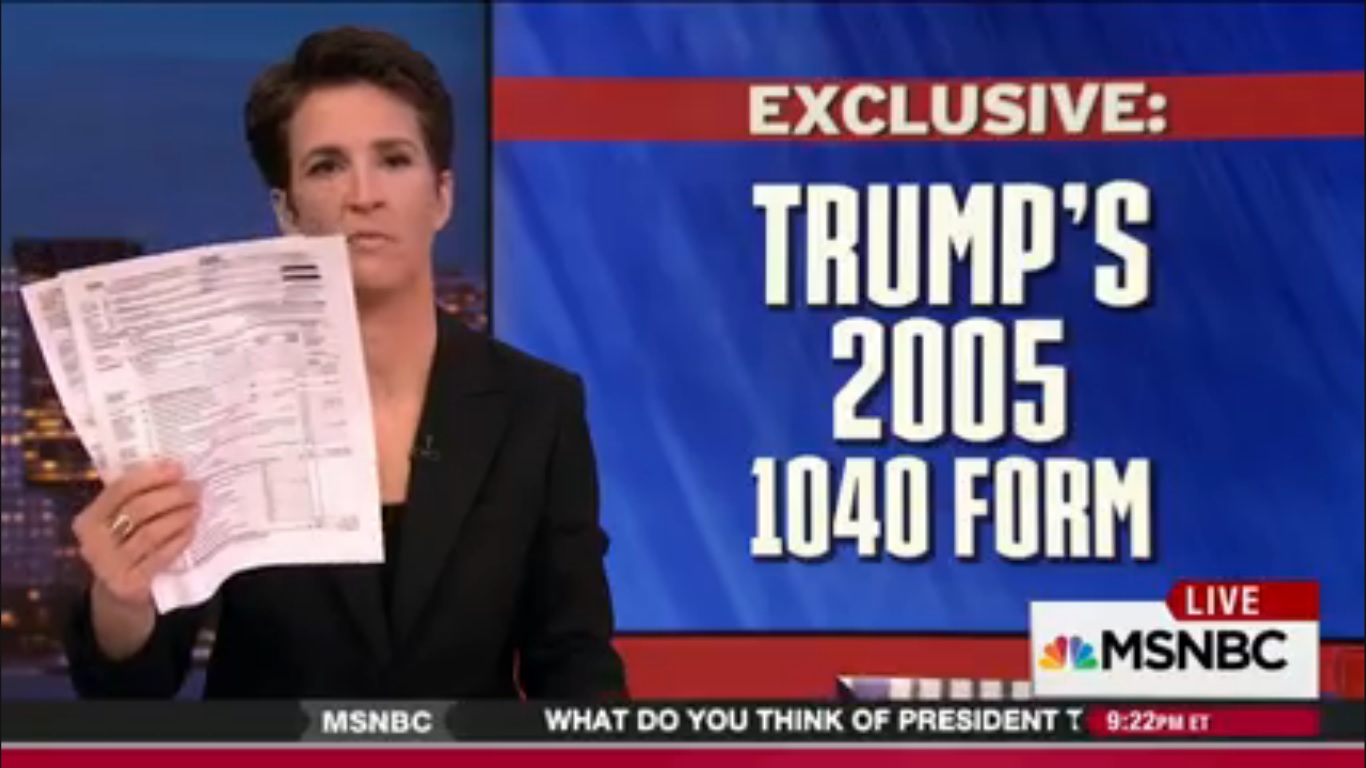 Tuesday night, MSNBC’s Rachel Maddow took her loyal fans and a whole host of newly-interested viewers on a journey about what could be in Donald Trump’s tax returns. She laid out a whole host of smoking guns that could be (and just might be, if we’re going by her journalism) in Trump’s taxes, with money ranging from Russian oligarchs to mobsters to Azerbaijan and Russian state-sanctioned criminals. As she tweeted a few hours before her broadcast:

So, naturally, we were all excited and maybe a little nervous to see what was going to go down. Even though it was later revealed that these were Trump’s 2005 tax returns, Maddow’s MSNBC-mate Lawrence O’Donnell backed up Maddow’s claims of “seriously” having Trump’s tax returns by tweeting this:

Yes seriously! I will be watching, then Rachel will join @TheLastWord at 10pm. This is the night we've been waiting for. https://t.co/NWjPDzxSqv

Again, we were waiting with bated breath to see how Maddow was going to single-handedly bring down Trump. What we should have guessed was that nothing was going to happen, since Trump and the White House hadn’t tweeted out anything to divert us from the episode.

My family and I watched it, and, in all honesty, not many of us are big Maddow fans to begin with. I could get into reasons why, but what’s important is the fact that we watched, waiting on her to get to the meat of the story, which is revealing those doggone tax returns. After her huge set-up (which was very well informed and researched, to be fair), she revealed what we were all waiting for…or not—all she ended up revealing were the first two pages from Trump’s 2005 returns.

Check out the beginning of the broadcast (18 minutes):

And here’s the reveal:

There were plenty of reaction from all across the internet after the reveal, including mine:

Watched Rachel Maddow. Now I know what it felt like for folks who watched Geraldo open Al Capone's vault.

As well as tons of celebs and talking heads, who were both for and against Maddow’s delivery.

This feels like a whole lot of hedging. #RachelMaddow

I think M. Night Shyamalan is about to show up. #maddow

dammit. 2 pages!? give me the pee video. #teampeevideo

.@Maddow always gives deep context on her way into a story. It's called "journalism", people.

This return, in isolation, is nothingburger BUT serious kudos to @maddow for hyping story to refocus attention on unanswered questions!

Agree tonight was overhyped but @maddow is brilliant & digs into Trump's corruption every night from every angle in a way few on TV do.

This Twitter moment gives a great overview of working journalists’ range of emotions over this story, featuring irritation, aggravation, and hand-wringing.

A surprising thread, directed at Maddow, comes from famous voice actor and Toonami legend Steve Blum. (Surprising to me not because of Blum’s liberal politics, but because his thread was the first in response to Maddow’s tweet teasing the tax returns.)

Love you @maddow, but this is barely a partial story… what about the rest of the return+the last 11 years of personal & business returns

.@maddow This smells like a planted, calculated distraction to me. We know you had to report it, but this does not represent the full story

.@maddow predicting trumps house of trolls will wave this shiny claiming transparency and foul by the fake media. Keep at him!!

.@maddow Meanwhile, I met a Russian Lyft driver who told me that thousands are emigrating here from his country to "Enjoy Trump" #worthalook

Okay, so now you know everyone’s angle on this. Now what’s my point of view? I’m kinda in the middle, but mostly on the side of folks saying Maddow did a Fonzie-esque shark jump. This might be contentious, so let me explain.

First, I’m a journalist. I might be on the entertainment side of things, but I also work in the “hard news” sector of journalism as well (just not on this site), so I have quite a bit of experience with journalism. I also watch the news as a viewer; I’m not always watching TV saying, “those are my colleagues!” No. I have a lot of feelings about the 24/7 news cycle and how they often hype stuff to get people to tune in. I count this as one of those times.

Maddow could have revealed these two pages in a regular news story; she didn’t have to make a big deal of it since, for all intents and purposes, it’s not a big deal. Does it reveal that he still paid less than he should have on his taxes due to some kind of alternative tax rebate for the rich? Sure. Is that something worth investigating? Of course. Did all of Maddow’s linked instances of Trump’s Russian ties make me think and refocus myself on wanting to know just what’s in Trump’s taxes? Sure. But the point, for me, isn’t that Maddow’s an intelligent woman telling us to be aware and alert. Of course she’s intelligent, and of course we should be aware and alert. For me, it’s all about how she advertised it, and at the end of the day, she engaged in false advertising.

She had to have known that her initial vague tweet about having Trump’s taxes would make us, the viewing public, think that she had all of the taxes from recent times, not from about 10 years ago. Even if it was just 2005, we still thought that there must be something in all of the 2005 tax returns that would link her inferences to actual numbers. But all she left us with were more questions and an unsatisfied feeling in our stomachs. There’s a reason Geraldo Rivera started trending last night, and it’s because it felt just like how audiences must have felt (or did feel, if you are old enough to have watched it live) to see a two-hour build-up only to wind up with an empty cave.

Overall, I get that these tax returns would have been aired on the news anyway. If it wasn’t going to be Maddow, it would have been someone else on CNN or some other network. But I wish these returns were treated as the ploy they are to get us to stop questioning Trump about his taxes. The fact that these returns randomly showed up in David Cay Johnston’s mailbox, and that Johnston states that Trump has leaked stuff out in the past to put himself in a positive light, coupled with the fact that the White House nor Trump made big deal about this, shows that the possibility that Trump leaked these tax pages is leaning more towards a probability. The real leak would be if someone revealed all of the pages of Trump’s taxes, including every itemized piece of income that could be parsed through. For me, the tax “reveal” seemed more about ratings and wanting to be first instead of waiting until something more substantial came along.

What do you think, though? Give your opinions in the comments section below! 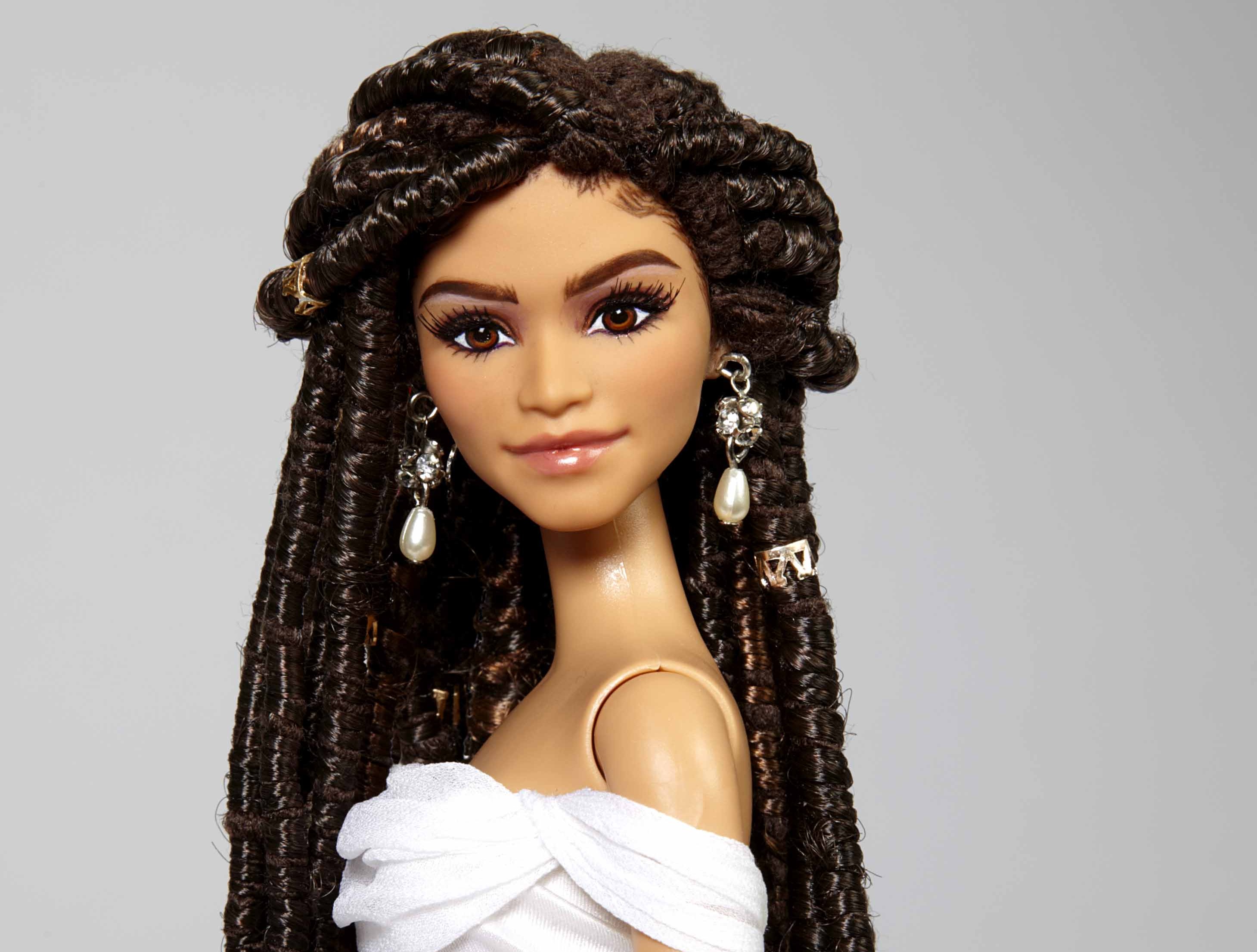 You might have heard that Zendaya is now a Barbie Girl, literally! She was given her very own Barbie at the Rock ‘N Royals Concert Experience Sept. 26 at the Hollywood Palladium. The doll is dressed exactly like Zendaya was at the 2015 Oscars Red Carpet, in dreadlocks and Vivienne Westwood.
Continue Reading
0
Privacy & Cookies: This site uses cookies. By continuing to use this website, you agree to their use.
To find out more, including how to control cookies, see here: Cookie Policy