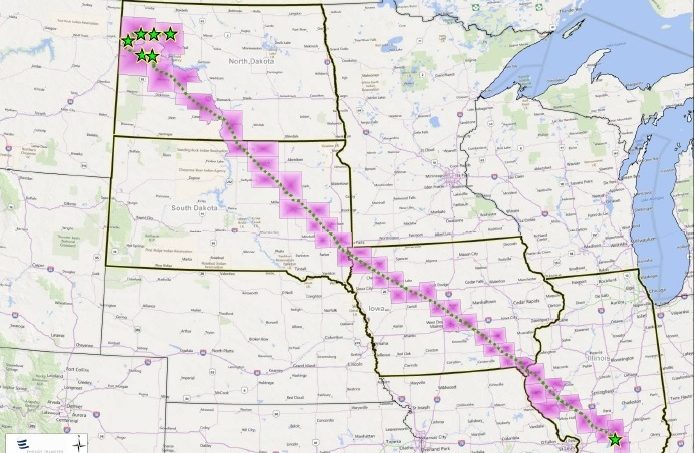 First, a small intro (with news gathered from the New York Times):

• The North Dakota pipeline is “a $3.7 billion project that would carry 470,000 barrels of oil a day from the oil fields of western North Dakota to Illinois, where it would be linked with other pipelines.” According to Energy Transfer, the pipeline could create 8,000 to 12,000 construction jobs, but it won’t create as many permanent jobs as one would think. The pipeline could also create millions of dollars for the region’s economies.

• While there are many who are for the pipeline, there are just as many who are against it, including the Standing Rock Sioux tribe, who have been protesting the pipeline for weeks in a field owned by the United States Army Corps of Engineers. Others against the pipeline are some farmers in Iowa, whose land the pipeline would go through.

• Of course, those behind this and other pipelines state that pipelines are safe. But as the New York Times states, “pipeline spills and ruptures occur regularly.” The paper cites Inside Climate News, stating:

“In 2013, a Tesoro Logistics pipeline in North Dakota broke open and spilled 865,000 gallons of oil onto a farm. In 2010, an Enbridge Energy pipeline dumped more than 843,000 gallons of oil into the Kalamazoo River in Michigan, resulting in a cleanup that lasted years and cost more than a billion dollars[.]”

Certainly, you are encouraged to learn more about this issue for yourself. But because you have the jist, let’s discuss why you need to care about this.

1. The Standing Rock Sioux Tribe is fighting for their right to exist freely. The pipeline isn’t just going to be built to traverse multiple states; the land it would be built on is sacred land that should be respected. The tribe has stated that the land the pipeline would run through “traverses ancestral lands–which are not part of the reservation–where their forebears hunted, fished and were buried. They say historical and cultural reviews of the land where the pipeline will be buried were inadequate.”

The construction of this pipeline only echoes the centuries of cultural and environmental destruction Native Americans have experienced. Marcus Patrick Ellsworth for MTV writes about some of the most recent offenses:

“Tribal lands have long been exploited for the gain of others. Several tribes in western states still have to cope with a legacy of illness and irradiated land from uranium mining during the Cold War era; the Wind River Reservation in Wyoming has had its groundwater contaminated by years of dumping wastewater on reservation land. Because so many communities have been affected by lackadaisical protection from toxic industries, groups like the Indigenous Environmental Network support campaigns to stop oil drilling and move us toward clean energy alternatives.”

One of the older examples, though, is the very monument that celebrates Americanism and Manifest Destiny, Mount Rushmore. The Black Hills, on which the monument is carved, is sacred to the Lakota Sioux and was part of their territory due to the Treaty of 1868, states PBS’s American Experience. But once gold was found in the mountain, the government forced the Sioux to give up the Black Hills. The monument was later constructed between 1927 to 1941.

The insult of Rushmore to some Sioux is at least three-fold:

1. It was built on land the government took from them. 2. The Black Hills in particular are considered sacred ground. 3.The monument celebrates the European settlers who killed so many Native Americans and appropriated their land.

2. The environmental effect of the pipeline could be catastrophic. As alluded above, the environmental problems aren’t being sincerely thought about when it comes to the long-term effects of this pipeline.

One of the worries the tribe has is what could happen if the pipeline breaks and leaks into the nearby Missouri River. Iyuskin American Horse for The Guardian writes how “pipeline construction [tears] its way toward the waters of the Missouri river which flow into the Mississippi, threatening to pollute the aquifer that carries drinking water to 10 million people.” He also writes how the pipeline has already altered the landscape by machines “[clawing] through the earth that once held my relatives’ villages” and how the pipeline violates treaties between the government and tribal governments.

“…This pipeline poses threats strikingly similar to those posed by the now defeated Keystone XL, but has received a fraction of the attention from mainstream media and big environmental groups. On 26 July, we were surprised to learn that the North Dakota permits were approved by the US Army Corps of Engineers to run the pipeline within a half-mile of our reservation. My tribal leaders have said that this [was] done without consulting tribal governments, and without a meaningful study of the impacts it will have. This is a violation of federal law and, more importantly, of our treaties with the US government- the supreme law of the land.”

If a pipeline did affect the Missouri and that damage flowed into the Mississippi, the longest river in the United States, then it’d be more than just the Standing Rock Sioux who’d be receiving poisoned water; it’d be people from the south westward,  about half or more than half of the entire country. That would be millions to possibly billions of dollars spent on cleaning up the Mississippi as well as millions or billions more spent addressing the health of those affected. Even more money would be spent working on repairing the damage to the wildlife. The effects of such a catastrophe could be felt for years or even decades. Remember that the Deepwater Horizon oil spill of 2010 is still affecting the gulf region in many ways today.

We should all stop for a second and consider supporting the Standing Rock Sioux who are leading the fight against the pipeline. They have already bled for it; the least we can do is say “I support.”

Photos Show Why the North Dakota Pipeline is Problematic | Buzzfeed