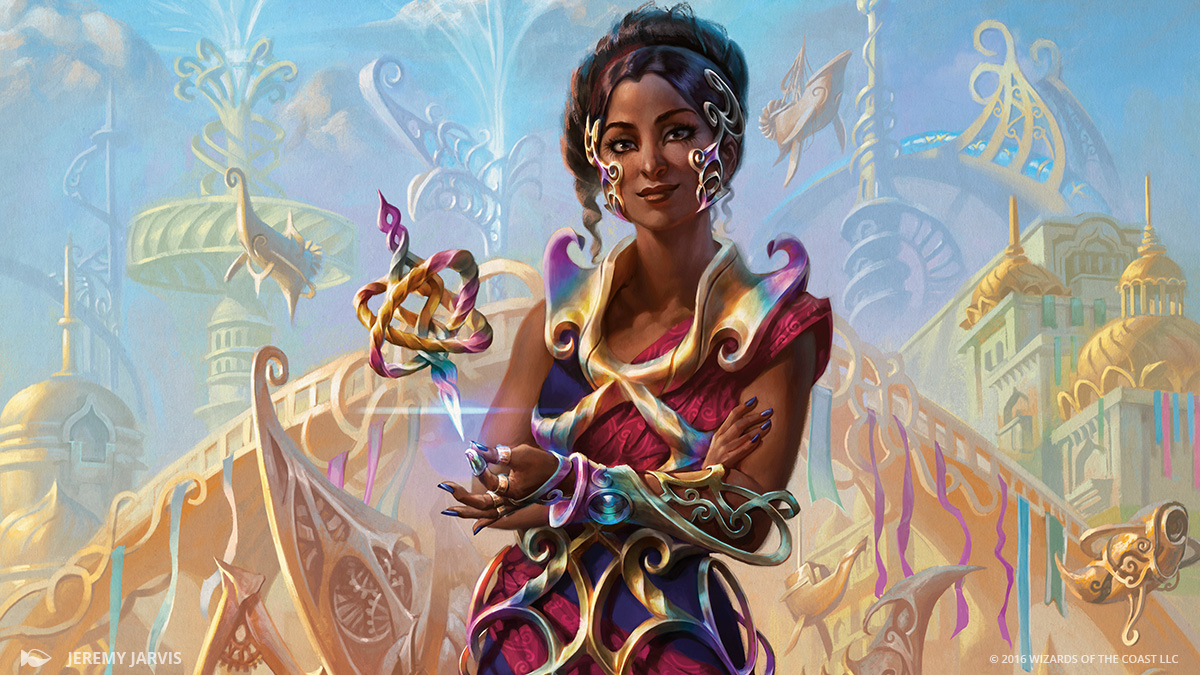 Having become a newly-minted fan of Magic: The Gathering, it’s a great opportunity to dive into the types of representation the company is striving towards. In case you’re wondering, my new fandom of the company stems from the fact that I am the consultant on Magic: The Gathering’s first black female Planeswalker, Kaya, Ghost Assassin. Instead of rehashing the particulars of how Kaya positively affects Magic’s representation mission, check out these links explaining the character and the process I took when providing notes.

There are other people of color out there who might not have given a second thought to Magic: The Gathering, quite frankly, because in communities of color, games like Magic are often labeled as “white people stuff.” That idea comes from how fantasy at large is treated; it’s usually a free for all for white characters to exist in a world devoid of racial/ethnic diversity. But to its credit, Magic is doing their best to meet the challenge of diversity in fantasy head on. Not only is Kaya one of their newest Planeswalkers, but they also are aiming to represent the multitude of players out there with characters who reflect our world. One such character that I’m really excited about is Saheeli.

Here’s the official bio of Saheeli:

On her home plane of Kaladesh, Saheeli is a famous inventor renowned as the most brilliant metalsmith of her time. She’s best known for the bewitchingly lifelike artifact constructs she crafts out of gleaming iridescent metal. From the smallest insect to the largest elephant, Saheeli has an uncanny ability to replicate any creature she sees, capturing the essence of its life in her metal creation. Admirers, collectors, and investors flock to see her designs, spending hours gazing, enraptured by her artistry.

Her innate, effortless talent has made her the envy of many fellow inventors, especially lifecrafters who look to her both for inspiration and as a formidable rival. Saheeli doesn’t shy away from competition; when it comes to defending her hard-earned reputation, she is fiercely cutthroat. But when not in contest, she’s wholly supportive of the efforts of other inventors, happy to share advice, a kind word, or an encouraging smile. She thrills at the prospect of innovation, and basks in the creative spirit that surrounds her in Ghirapur. Her bright, optimistic personality draws others to her, and her genuine, thoughtful nature resonates with her fans, who hail from all corners of Kaladesh.

Saheeli’s talents extend beyond what the people of Kaladesh realize or understand. She’s a Planeswalker with a powerful magical command over metal. She can access seemingly endless threads of metal, which she can then weave into one of her creations. And once created, Saheeli’s magic allows her to compel her metal constructs to do her bidding. Thanks to her abilities, she’s never at a loss for an artifact companion.

So, what’s the excitement about Saheeli for? Well, for starters, she’s one of the few women of color in the cast line-up. At present count, there are two other women of color—Kaya and Narset. Another character worth noting in this group as an adjacent member is Tamiyo, who is a member of the moonfolk.  The moonfolk’s culture and the moonfolk’s plane, Kamigawa, are loosely based on Japanese culture. In fact, Magic admits this in their description of Kamigawa:

Reminiscent of sengoku-era Japan, this plane contains two symbiotic worlds: the utsushiyo, or material realm, and the kakuriyo, or kami spirit realm. Each kami was a divinity, and the way to happiness was to honor these gods and live by their ways. The inhabitants of Kamigawa were content with this life of devotion. Then the unimaginable happened. Their gods turned on them.

Naturally, the small amount of women of color (and people of color of all genders) is an issue, but Magic is well aware of this issue and are actively working to correct this as best they can. The increase in representation of women of color in the Planeswalker series is something that is encouraging and seeing how serious Magic is about representation, I’m quite certain there’s more coming down the pike towards this end. Saheeli is a welcome addition to the list of women Planeswalkers.

It’s going to be great to see even more Saheeli cosplay (as well as Kaya cosplay!)

Welcome to the Planeswalker family, Saheeli!

What do you love about Saheeli and Kaladesh? Give your opinions in the comments section below!